We were in New York last week for the International Auto Show. For those who don’t know, the NYIAS has been going on since 1900! For more than a hundred year, folks have gathered in NYC to see the latest in auto tech and to get a peak at future offerings. We started attending the show about ten years ago when we added the RainyDayGarage section to RainyDayMagazine. 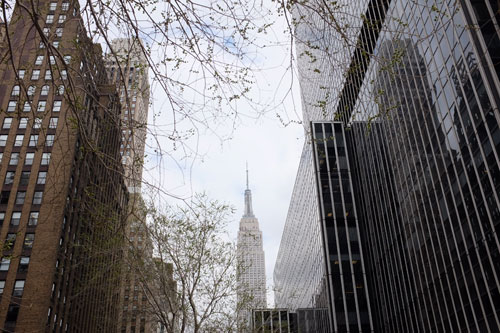 While still in the mid-forties, there were definitely signs of Spring. Don’t remember why we skipped the NYIAS last year, but we wanted to go this year because of Apple’s announcement of CarPlay. We wanted to take a survey of the state-of-the-art, in-car interfaces that a number of vendors were showing this year and to get their thoughts on Apple’s potential impact when CarPlay goes live in 2015.

The NYIAS is a huge and hectic show when it opens to the public. Thousands and thousands of showgoers will fill the Javits and stream across the show floor. Once the show opens, the opportunity to look closely at the cars will not be an easy task. Fortunately for us the press is given a few days before the public opening to mingle with vendors in a more relaxed atmosphere. We can ask questions, see demos of the features, and sometimes even chat with the car designers and engineers on the technical aspects and challenges. 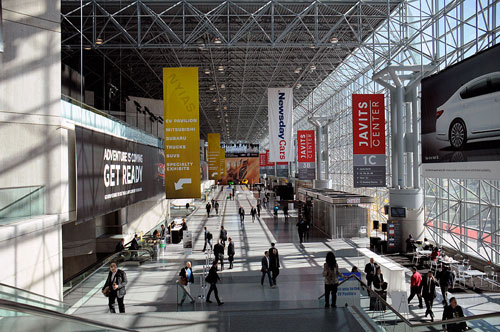 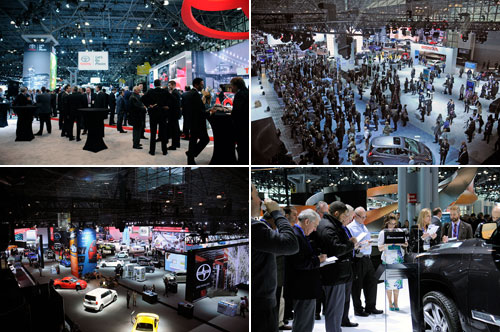 Security at the show was visible, but not stifling, at least on Press Days. We don’t know what things will be like when the show is open to the general public. But whatever you do, do not pet the dogs. They are working! 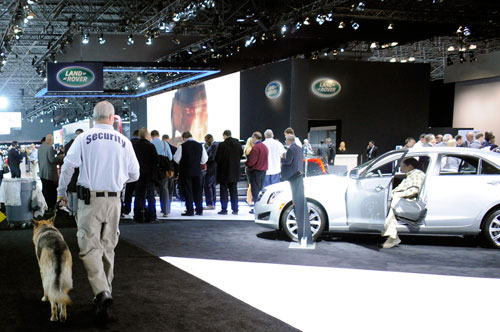 Ok, some of the folks back at the office might be right that we go to the NYIAS in part because of the free food: espresso, mimosa, and other things. Car companies realized a few years ago that having a barista at the booth on Press Day will pretty much guarantee lots of foot traffic. Some of us were on our third espresso before realizing we needed to pace ourselves! That was when we switched to mimosas. Perhaps what we should REALLY should have done was start taking photos of cars 🙂 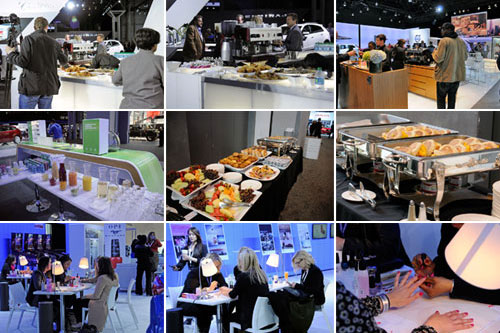 While the food and the freshly made coffee drinks are much appreciated, a place to sit is even more coveted after walking a few miles on the show floor. Unfortunately, rushing to various and overlapping press announcements all day long will mean the seats will be empty most of the time. You know, someone COULD plan the announcements such that they would be made in the order of the LOCATION of the booths…just a thought 🙂 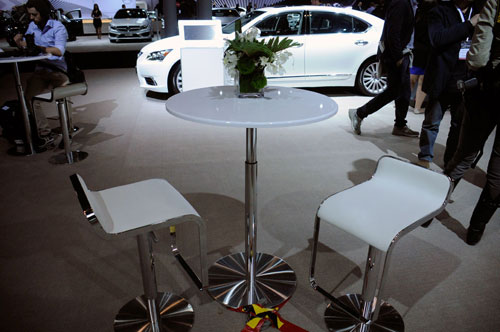 When the show opens to the public, the cool cars will still be there and the attractive ladies standing next to them will have their facts memorized and their lines rehearsed. Feel free to ask them about this year’s new features; they will be able to rattle off them off for you. If you ask them nicely, they will even pose next to the car while telling you about them. 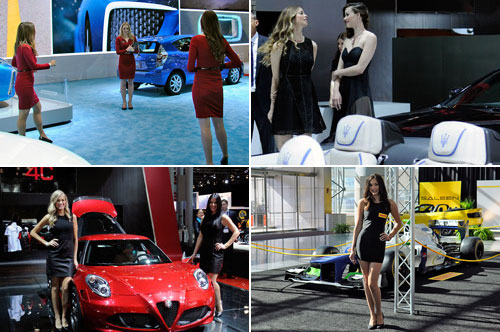 The NYIAS will be at the Jacob Javits Convention Center until April 27th. The best way to get there is to NOT drive into Manhattan, as parking anywhere close to the convention center is crazy expensive IF you can even find a space. Your best option is to take public transportation into Penn Station and walk the few blocks from 8th Ave. to 11 Ave. to the show. It may take 15 or 20 minutes to walk there but will save you a LOT of headaches 🙂 If you can’t get there, don’t worry, we have lots more to say about this year’s NYIAS in the next write-up. Look for it later in the week.