This is the church to which belongs the steeple where two lanterns were hung on the night of April 18, 1775 to indicate to Mr. Revere and Mr. Dawes that indeed the British were coming, and that they were coming by sea. 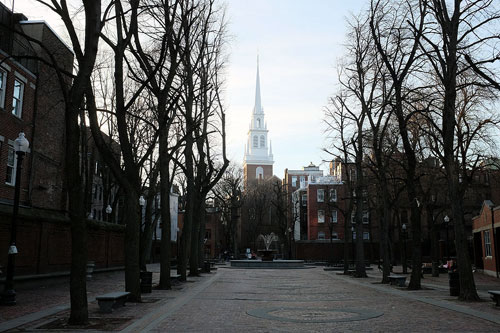 The hanging of those lanterns—for less than a minute—was a brave and possibly illegal thing to do, as it was the light that lit the fires under the colonialists’ arses to rise up and say (colonially speaking) “We’re mad as hell and we’re not going to take it any more!”

They knew “it” was coming, they just didn’t know when. The American colonies were being bled dry by unsupportable taxes and sky-high levies and restrictions on the purchase of goods from other colonies (in other words, buy it from England or don’t buy it all).

So Boston towne, a place of non-conformist merchants and craftsmen, took that fateful step of lighting the lanterns that allowed Paul Revere to “ride to every Middlesex village and town/For the country folk to be up and to arm.” They armed themselves in order to stand up for themselves, for fairness and freedom for all. 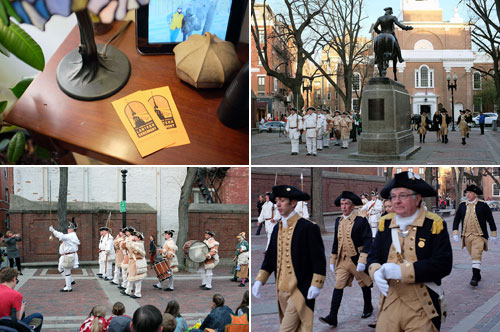 How do I know all this? Aside from being a Bostonian and knowing it by the process of osmosis, I mean. Because, because, I spoke to Mr. Revere himself yesterday about it, and you can’t tell me otherwise.

We were at the Old North Church for the 239th lantern lighting ceremony. The easiest way to get to the church is to walk up Hanover Street until you get to the Paul Revere Mall, see the white and elegant steeple past the fountain there, and let it guide you to the church’s front doors.

And if you’re lucky enough to be on the Mall on the evening before Patriot’s Day, you may just have the great good fortune of following, like your very own ragtag band of rebels, a colonial fife drum corps and some stylishly tri-cornered fellows into the church.

RainyDay attended the pre-ceremony bash as well, and in all humility I tell you that I rescued Mr. Revere from the clutches of the British yet again: some lout was snapping a pic of the fellow using an iPhone with an image of the Union Jack on its case! Said lout did apologize for the gaffe and we all went away friends.

Mr. Revere, looking extraordinarily spry for being 279 years old, discussed with me the fact that no one in the colony could make an honest living owing to the taxes imposed by Parliament causing such an increase in the price of goods that very few could afford their purchase. And as his primary occupation was that of silversmith, his business was walloped; he openly stated that a full silver tea service could easily cost that of half a house. Such a prestige item was affordable only to the wealthy of the colony, and there were fewer of them in 1775 than in the past.

So, like all level-headed and hardscrabble Bostonians, he thought of other income streams; he taught himself copperplate engraving, for the printing of images and bookplates and the like. Also, he turned to denture making, although he made clear that he was not a dentist and did not pull teeth. I mentioned that perhaps he might find success in copper; he replied that perhaps his descendants might pursue that line of commerce but he needed first to become familiar with iron, “as there may be cannons to cast.” He was delighted to know that I hail from the same town as Mr. John Adams, and both of us agreed that John’s cousin Samuel was indeed a rouser of rabbles, but that that was a good thing.

In addition to finding ways to support his ever increasing family, Mr. Revere became a gatherer of information. He would neither confirm nor deny that he participated in the Boston Tea Party, and I did not press him on it. If he wants to remain “anonymous” so be it (but we all know).

And then it was time for the ceremony. In the Old North Church. THE The Old North Church. Still a church, now a major historical location. The ceremony was led by The Reverend Stephen T. Ayers, Vicar of the church itself, and The Right Reverend Gayle E. Harris, Bishop Suffragan of the Episcopal Diocese of Massachusetts. The Michigan (Michigan?) Fife and Drum Corps piped us all in: if that was how militia were summoned prior to Internet meetups and Twitter notifications, I’m in! 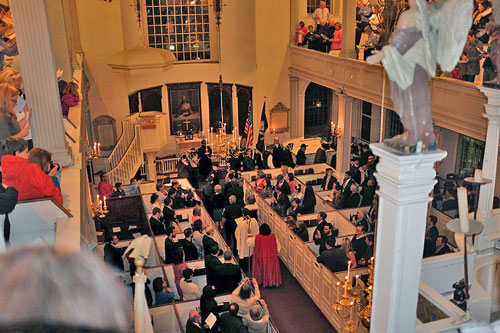 Tonight’s ceremony brought together the brave acts of those few in 1775 and the selfless behavior of the many during last year’s Marathon bombings. Reverend Ayers pointed out that the bombings happened “a mile from here,” and U.S. Senator Markey spoke about how the city has taken “the shattered shards of the past” and reassembled them into a future that we can all participate in. 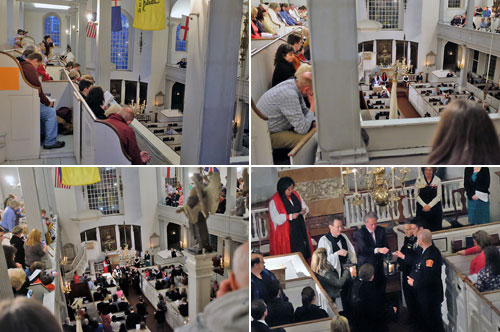 The honorary lantern carriers this year were Roseann Sdoia, who lost part of a leg in the bombings last year, and the first responders who assisted her only moments after she was grievously wounded: Boston firefighter Michael Materia, Boston Police Officer Shana Cottone, regular guy Shores Salter, and her mother Rosemarie Buckley.

Once the lanterns were placed in the steeple we all filed outside to see the total utter coolness of those lanterns beaming across the dark sky. And if, like myself, you were one of the .0345% of people not taking photos of the lanterns then you would have seen Mr. Revere and Mr. Dawes actually galloping past the Old North Church on their way to Charlestown to start their nighttime ride up to Lexington. 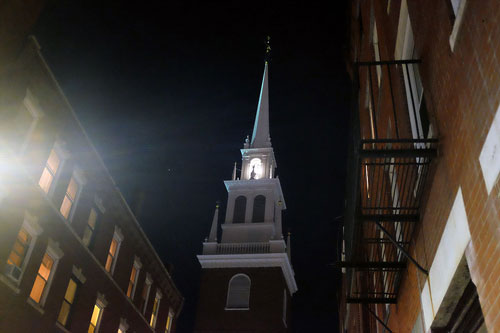 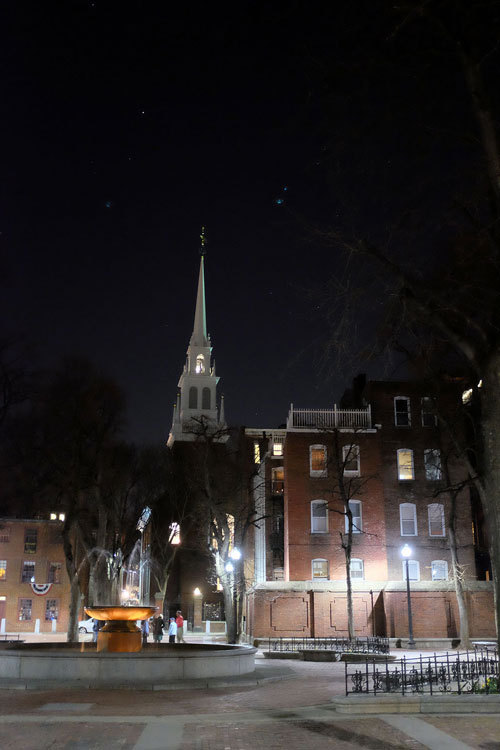 D@mn, Boston, you are one fine city. You do both the past and the present proud.