The  iPad2 was officially unveiled yesterday. True to form, Apple hit it out of the park...again. We have been saying the following for a long time..."no other company is going to be able to compete with Apple until they can do both hardware and software." In the one hour press conference, Apple undid all of the effort expended by Motorola, RIM, and that company (who's name escapes us at the moment) with the 7" tablet, in trying to compete with the iPad. The iPad2 will be the dominant tablet for the rest of the year. Those companies might as well pull their tablets from the market and go back to the drawing board(s). 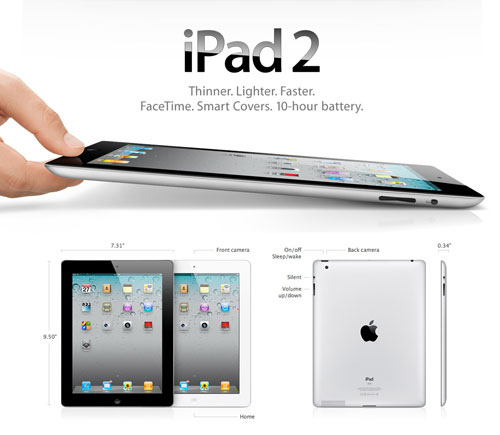 The iPad2 is a worthy successor to the almost 1-year old original device. It is faster, smarter, and can do more than ever before. It comes in two colors (Black, White), has both a front and a rear facing camera, and…wait for it…it costs the same as the original iPad. Oh yeah, it is also thinner and lighter. Apple is not satisfied just with putting a major damper on the hopes and dreams of their competitors, they also want to look good while doing it… in ten different colors. When the conventional wisdom is to wrap everything in a case, Apple upsets the cart with a cleverly designed cover/stand. It covers the screen, folds into a stand, and will even let you get a peek without having to take it completely off. And yes…it comes in ten different colors. It will be interesting to watch the mad scramble of those who want to be the first to market with an iPad2 cover.

The front/rear cameras will be great for FaceTime and other video chatting apps. We are also quite excited about its pairing with a high resolutions HDTV screen. However, the more interesting part is the unanticipated apps resulting from a dual cameras/tablet union. What kind of out-of-the-box apps would the new hardware combo enable which did not make sense on the smaller iPhone screen? We don’t know, but it will be interesting to see.

Are we going to get the new iPad? We would have ordered one if the Apple Store was taking orders yesterday. The original iPad is still a capable device and we expect to continue to use ours right up to the moment someone buys it on Craigslist. Regardless of whether we find a buyer for our Gen1 iPad, come March 11, we’ll be picking up an iPad2 at our local Apple Store. FirstLook to immediately follow.