The weather forecast for this past weekend was "dry and sunny." We were happy to hear that as we were driving up to New Hampshire to see the last of the Fall colors. Our destination was the area around Lake Sunapee with a day hike up Mount Kearsarge. 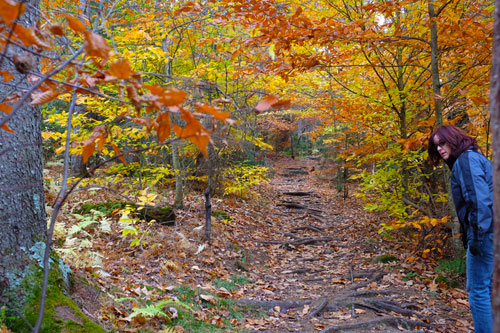 The trails up Mt. Kearsarge are moderate (to some of use that made the hike). There are two paths to the top. The more direct route is 1.1 miles and took us past some rockswhich had to navigated before reaching the summit. We took the longer route of 1.8 miles for the descent, because (we were told) it was a bit gentler. We were happy that we decided to wear our hiking boots instead of sneakers as both routes taxed the knees and ankles.

A little past the half-way point on the way up was a rock outcropping which offered a great view of the area. Duirng this visit there was a slight haze in the air which muted the colors of the foliage. Click the panorama image below, which was stitched together from six snaps.

The top of Mt. Kearsarge rewarded us with an unobstructed 360º view of the surrounding peaks. Just make sure you have a windbreaker as it was pretty breezy up there.

While the Fall colors were still visible everywhere in New Hampshire, it has definitely peaked. If you want to catch the bright reds and yellow, best look further south…and hurry; Winter is coming!!!