It has been a while since we updated our progress with the HeadFirst iPhone Development guide. We have been working through the examples from Chapter 4 through Chapter 6. The going was a lot slower due to the constant "Would you review this? Should we review that?" interruptions. The Holiday weekend will give us some "quiet time" to focus and to consolidate some of the work we have done so far. However, here a quick summary of where we are. 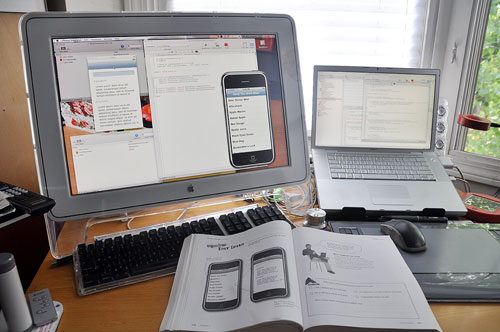 We have completed Chapter 4-6. These chapters were interesting from several perspectives. It finally felt like we had learned enough to build something that might actually be useful. OK, minimally useful, but still, it was a hopeful sign. We learned a bit more about debugging in the iPhone environment: how to set breakpoint, look at variable, step through code. We also got more exposure to all of the ready-made objects available in the iPhone framework and built our first multiple view app.

In working through how to build the multi-view Drink Mixer app, we learned sorting, saving, and editing data. We also learned quite a bit about all of the built-in widgets and animations (keyboard, screen update, etc…) which make an iPhone app feel like an iPhone app. The take-away lesson was “look before you build” because A LOT of the stuff is already there.

Now that we have finished Chapter 6, we have a much better understanding of how to build a multi-page app with some basic features (scrolling views, saving data, sorted list, etc…). We also learned we need to pay attention to the finer UI details: expected-but-missing UI items such as a details indicator could get the app rejected by the App Store.

It was just announced that the iPhone4 sold more than 1.7 million units in its first few days of being released! Also, the iPhone may not be exclusive to AT&T come next year. The word on the street is that it will be available from Verizon by January 2011. Early estimates are that Verizon will bring onboard another 12 million iPhone users. This is one fast-growing market. We better finish learning about how to program for this device and get going on our app because there is gold in them thar hills!!!