A few months ago, RainyDayMagazine was accepted into the Adobe Beta program for their new tools for publishing digital magazines for the iPad. A few other publishers (Wired, Martha Stewart, etc...) have published a version of their magazines using these new Adobe tools. The tools are not yet available to the general public, but they are robust enough for production use. 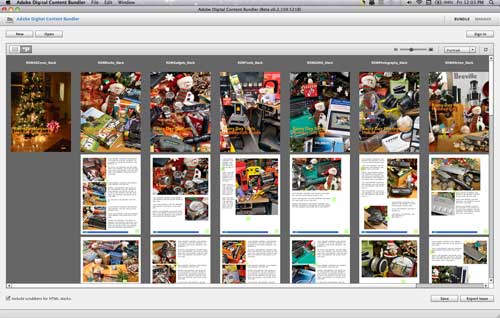 In the process of learning how to use the Adobe tools, we took the opportunity to put together a little Gift Guide based on this month’s articles. The RDM 2010 Gift Guide app just got approved by Apple for distribution in the iTunes App Store. The app is free and can be download now. You can find it by searching for “Gift Guide” in iTunes, or you can just click on the image below.

We learned quite a bit about the entire digital magazine workflow in putting together this little gift guide. The current Adobe process is workable, but a bit cumbersome. The DPS tools enabled us to build, test, and tweek the app until it was just right. However, the final self-contained version must be built by Adobe. To do that, we worked with an assigned resource on the Adobe side and had to supply the follow files:

The first hurdle was how to get the files to Adobe. One solution is to use DropBox. Another is for Adobe to set up an FTP account for us. After a little back and forth, it was decided that they would set up an FTP account. It took a few cycles before we got the access to the FTP site to work. The second hurdle was getting the various certificates and provision files. Because all App Store content is digitally signed by both the developer and Apple, there is a fairly complicated process which must be followed to generate the 2048-bit RSA encryption keys. It took us a few tries before we understood what was required of us from Apple. After about a week, we got things sorted out and Adobe was able to build a file for us to submit to Apple for approval. The Apple approval process took another week. Once approved, we received an email from Apple with a link to the app in the App Store.

Here are a few screen shots for readers who may not yet have an iPad. The Adobe tools automate many of the UI functions such as navigation controls (Home, Back, TOC, Scrubbing), swiping, and scrolling. We did not have to write any code or do any layout work to make any of those things happen. The only extra work we had to do was to adjust the layout of the content for the different orientations.

The first thing one will notice is that, because of the higher pixel density of the iPad, the 1024×768 images look much better on an iPad than on a typical computer screen. The reading experience is also different on the iPad than on a monitor.

Tapping on the multi-state interactive elements (video, slide shows, etc…) feels more natural on the iPad. Hyperlinks to external sites will bring up those pages inside the app. This is nices as it lets the user easily come back to the app once they navigate away from the external site.

Now that we have completed the process once, we have a much better handle on how to schedule for a release. Basically, we need to add a two-week buffer into our planning, assuming nothing goes wrong. With the current process, it is possible for Adobe to support a few dozen publishers, but unless they hiring a ton more folks, it is definitely not very scalable. At some point Adobe is going to have to provide a way for publishers to build their own self-contained apps or the process will hinder the number of magazines which can be published in a timely manner using their tools.

We hope to have an iPad version of RainyDayMagazine ready for Spring of 2011. Look for it in 2011. Happy Holidays!