New England paid for its mild Winter last year by getting hit by four (4) Nor’easters this year, with THREE of them in the month of March!

While we didn’t get inundated with snow like in 2015, the weekly Nor’easters definitely took their toll. Still, everything survived, Spring came, and the renewal process begins once again… 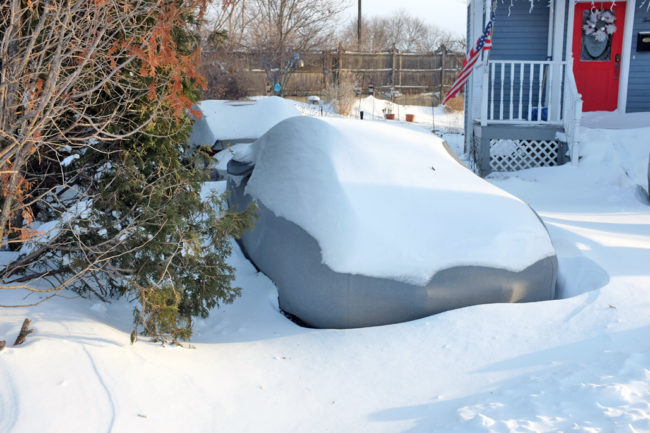 Winter came on with a bang with Nor’easter #1, or more precisely, a “bomb.” Here is a pretty cool “wind map” graphic of the storm. It took us a while to dig out and see what got trashed from the storm before the inevitable freeze.

The only thing we could see from the inside was that a few sections of the fence got ripped off by the wind. We had put out extra feed ahead of the storm for the critters and it appeared they all appreciated it. 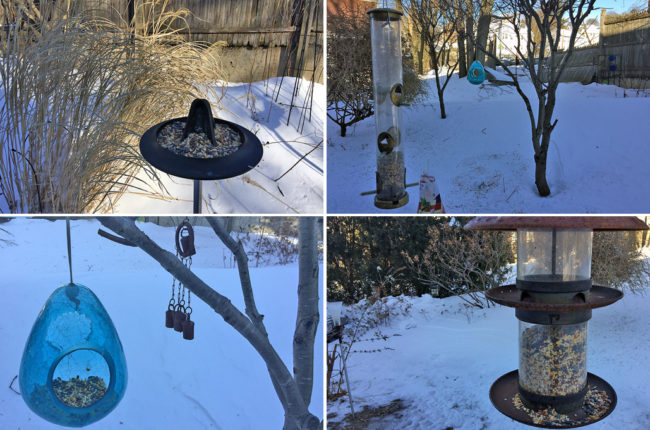 Nor’easter #2 dumped heavy, clumpy snow on everything, but it did make for some nice scenery. Of course, the cats couldn’t have cared less…they ventured out regardless. 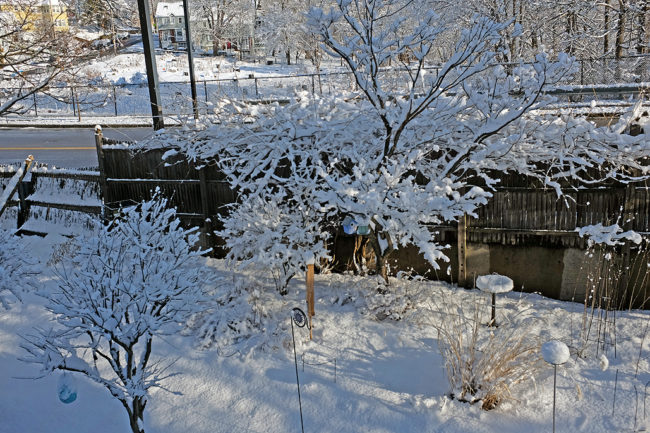 Everything outside being under a blanket of snow didn’t mean nothing garden-related was happening inside, though.

Many people have told me that fig trees grow like weeds, but we have never been able to propagate one…until now. The fig photos were taken about six weeks apart and are clearly indicating “We are on to Spring!”

Nor’easter #3 dropped a lot of snow, but not as mush as the previous two storms. Lady Cardinal visited the morning after to survey the feeder situation and left satisfied. 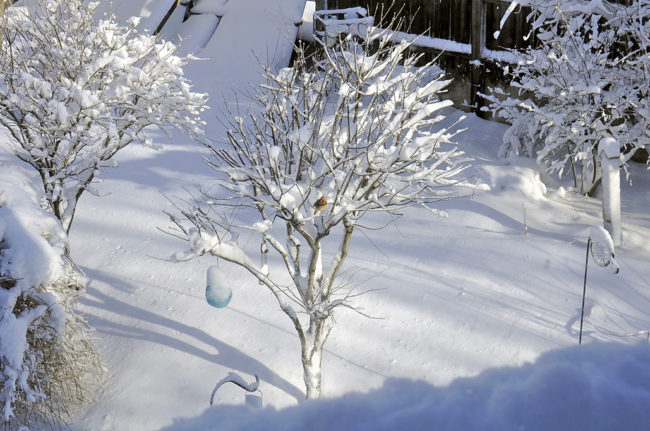 We saw Mr. Cardinal one morning sitting in the tree all lit up, but couldn’t get the gear in time to get the shot. So we set things up by the window hoping we would get another chance.

Mr. Cardinal came back the next day to the exact same spot! Since we knew what was coming, we waited until the sunrise was just right to light him up against the darker background, and he obliged by staying until we got the shots. Things are like that in the RainyDayGarden 🙂

Nor’easter #4 didn’t turn out to be much of anything here in Boston, but it did offer up a rather colorful sunset. This one turned out to be the last one. Whew, another New England winter survived! 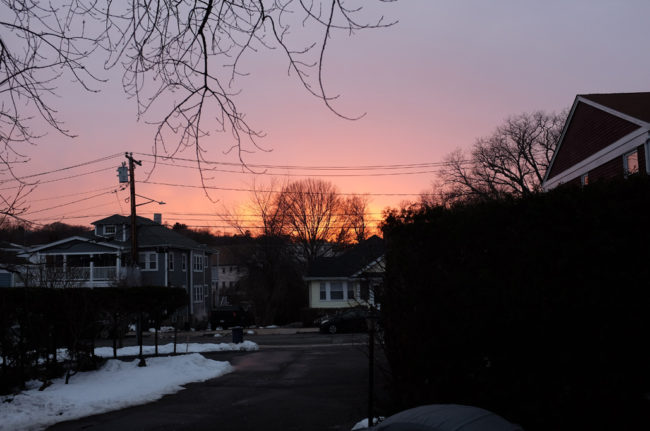 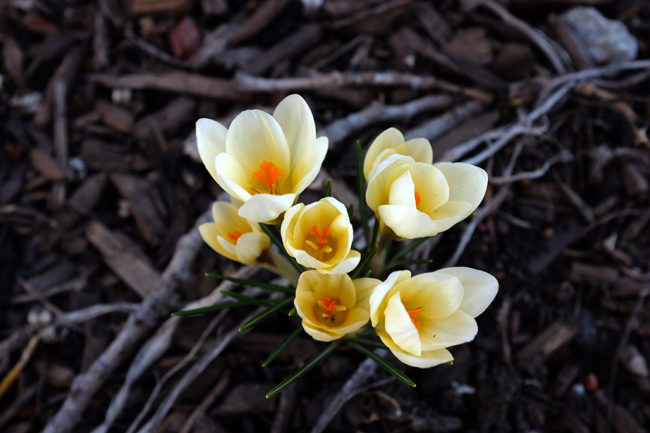 The crocuses started blooming in the RainyDayGarden on April 1st

Could this really be Spring ???

April turned out to be a lot less dramatic, weather-wise. We cleaned up the RainyDayGarden before things started poking through the earth, set up some supports for the peonies and zebra grass, and washed out all of the birdfeeders. We know the blue jays appreciated it! 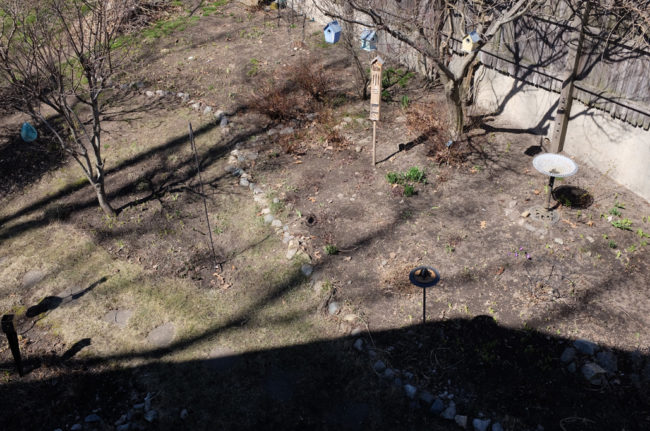 We came across a 2″ cocoon when cleaning up the yard. We thought is was a cocoon for caterpillars which would eventually become moths or butterflies.

After some Googling, we realized it was a praying mantis cocoon, which would make it an “egg case” and not a cocoon. Our insect knowledge is clearly wanting, but it was still an exciting find! 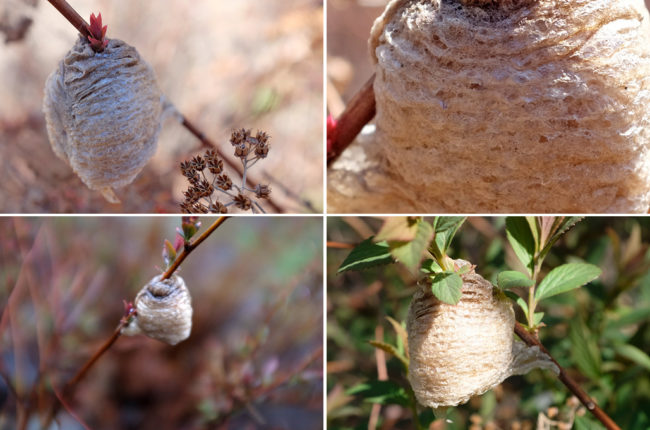 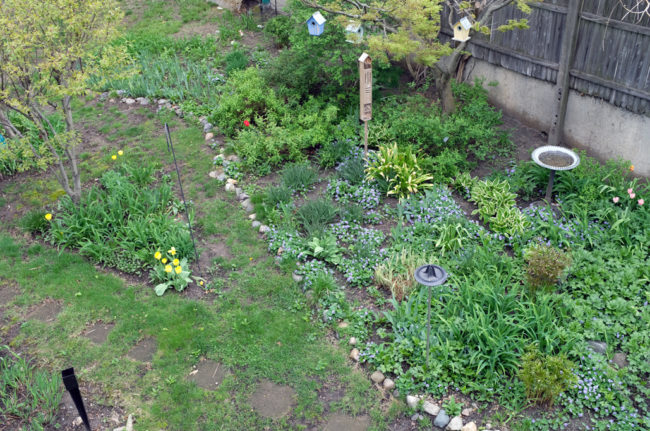 By the time May rolled around, the RainyDayGarden was in gear. Those few “perfect days” are why we put up with the New England winters, and we definitely got a few of them in May.

Ferns, violets, and clematis all showed their colors. The heady fragrance of the Lily Of The Valley patch directly under the window wafted into the room whenever the window was open. 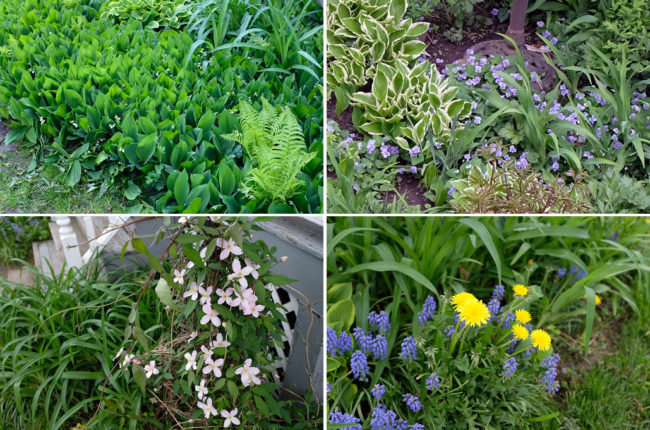 We are not sure why people spend so much money and effort trying to get rid of dandelions! We find them quite attractive mixed in with the grape hyacinths. Also, dandelions leaves are apparently good in salads 🙂 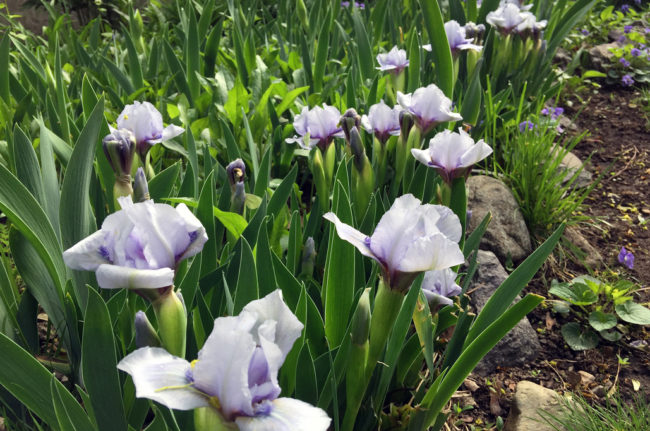 May is when the irises open up in the RainyDayGarden. The pale purple ones are always the first to flower, followed by the yellow, with the vibrant purples bringing up the rear.

This year, the yellow irises weren’t done until late May. The black ones (OK… really deep purple) then picked up the slack. Right behind them were the Siberians!!! 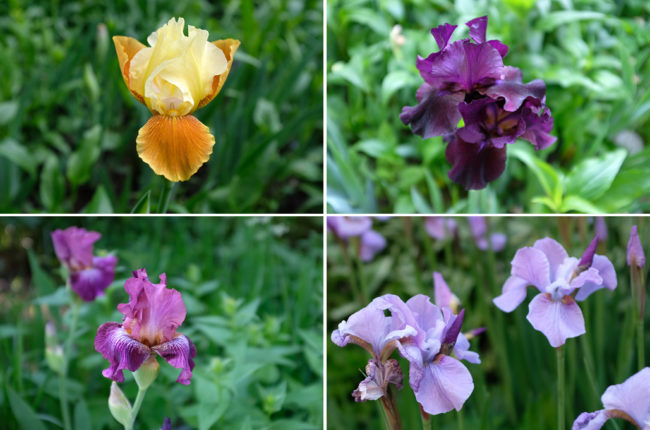 This year the warmer and cooler temps in late May caused the irises’ opening and dying off to overlap. Seeing all of those blooms together is a treat we don’t get all that often. 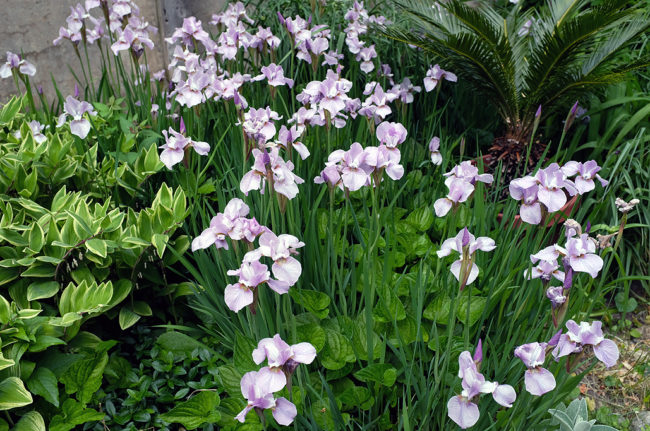 Last year, we added two new perennials to the RainyDayGarden, Columbines and Calla Lilies. Both were suppose to be cold-tolerant. The Columbines reappeared. The Calla Lilies not so much. We got them at Home Depot and they do guarantee their plants for a year, but we are not exactly sure how to “collect.”

The new Columbines were the variety with “spurs.” We like them because they are so cool looking. We we also have the spurless variety. They are just as complicated-looking as the ones with spurs. We like them because the layers of petals make them appear as if they were “vibrating” or that we are REALLY good at taking time-lapse photos. 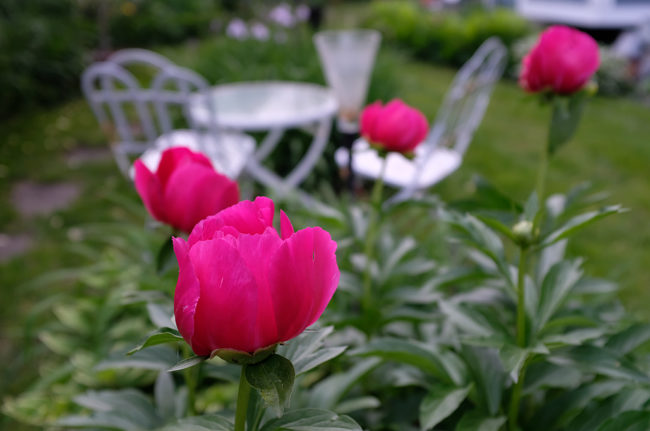 We made an observation about the red peonies last year, so we thought we would document it this time around as well. What we noticed was the “redness” of the red peonies actually changes over the course of its blooming cycle.

We don’t know if it is actually fading from the exposure to the sun or what, but this is the only flower in the RainyDayGarden that behaves this way!

Many of the peonies, once opened, are so top-heavy that I can not see them unless I bring them inside. The red ones didn’t really have this issue, but the white ones definitely did. Cutting them does shorten the length of the blooms, but better than not getting to enjoy the show at all. 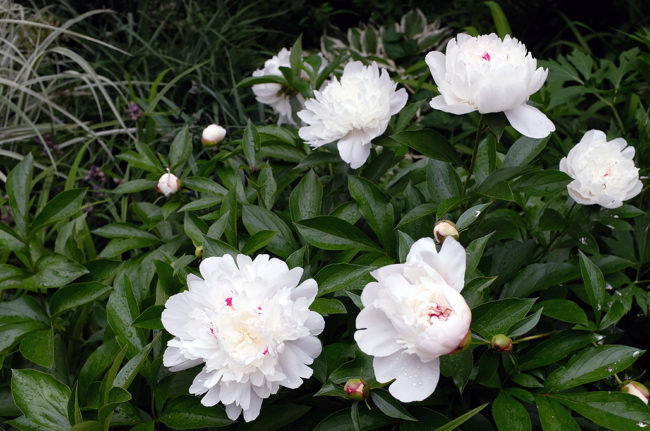 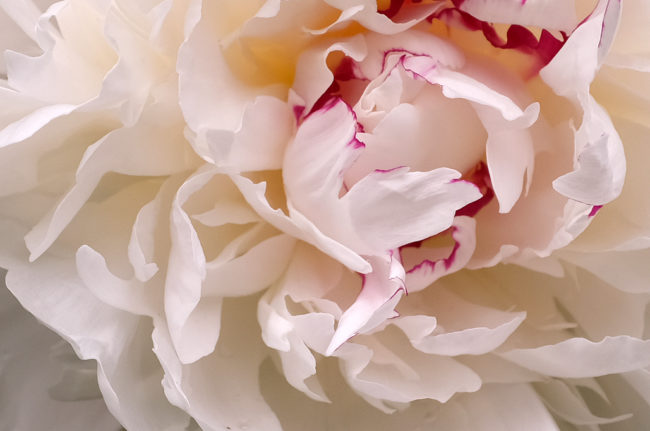 Also, these peonies are the only scented ones in the RainyDayGarden and the fragrance, while delicate, is quite heavenly! 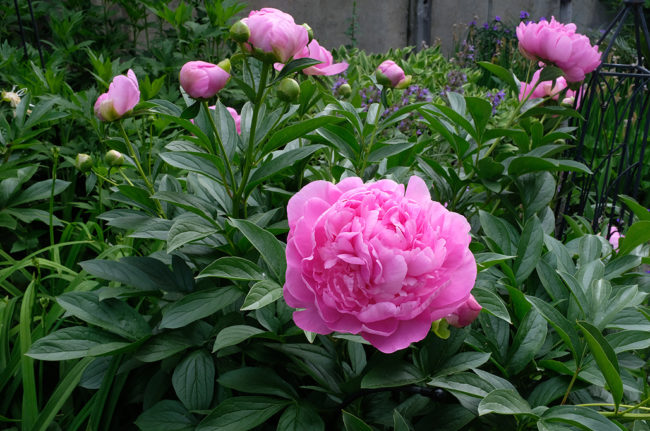 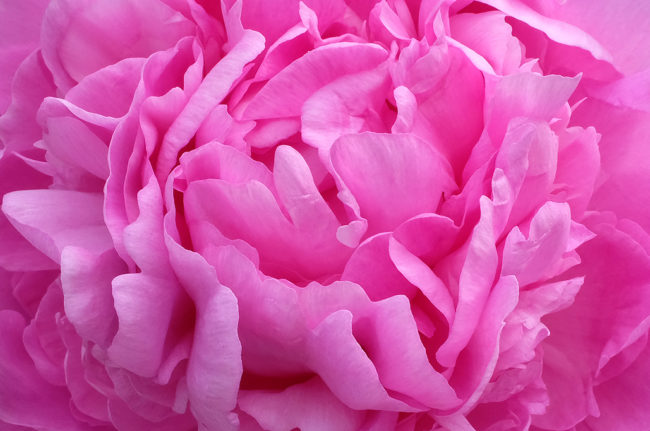 The one surprise this Spring? The complete lack of blooms from the lilac bush. We were hoping for another “explosion” given last year’s performance, but were disappointed. Well, there is always next year.

We are “on to Summer” and it is shaping up to be a hot one. We’ll have the Summary in September.