Hardware companies think that writing software is easy (Sony) and software companies think that building hardware can’t be that hard (Microsoft). Apple has been doing both as an integrated discipline for a few decades. Apple has created a culture that embraces both software and hardware, and replicating that culture is not as easy as some would think. This is the main reason why even though “tablet PCs” have been around for almost ten years, they never got out of their niche markets. Yes…they can do everything a regular laptop can do, but they are heavy, expensive, and have crappy battery life. The Apple iPad is the exact opposite of all of that. It can’t replace a laptop, but it is light, inexpensive, and can last for days between charges.

What got us onto this topic was a recent discussion on a few blogs with some very knowledgeable folks. We were trading thoughts with some other posters about the HP Slate, HTC, JooJoo, and what our idea is of the “perfect tablet.” 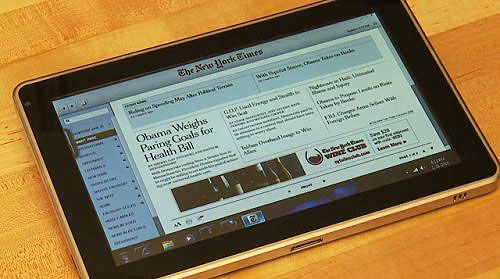 In the course of the discussion, the following transpired which we thought was worth sharing:

And the trajectory of Netbooks sales are heading…where? In six months, the word netbook will be a footnote in computing history. Of course we could have paid less for a netbook than our iPad, but the netbook wouldn’t have been used…which would have made the the savings of the price differential a false economy (as are most purchases based on that type of thinking).

While the iPad trajectory will level out, the netbook curve will go down to zero. The same will happen to the iPad when a better device comes out, but light-weight, multi-touch devices are going to become the new 3rd screen.

The argument we have always made is if one really wants a “perfect” combo of hardware and software an integrated approach is the only way to go. If you are a software-only company (ie:Google, Microsoft), the software has to be generalized to anticipate the needs of multiple hardware makers, to allow them to pick a combo of features, so their products can stand out. This criteria makes it difficult to optimize any specific combination.

When Apple designed the A4 chip, they could target performance parameters based on agreed-upon features that the chip had to support. They could optimize the heck out of the instruction set because of that bounding box. Also, Apple can drop the iPad to $300 and still make money with the App Store. This hardware/software one-two punch is pretty difficult to counter, and we don’t see anyone standing toe-to-toe and slugging it out with Apple any time soon.