Hurricane Irene went inland, pummeled Vermont, but spared most of Boston. All of the plants in the RainyDayGarden came through unscathed. As we had mentioned in July, the Passiflora made it through the Winter, buy got a very slow start due to all the rain. It has, fortunately, been budding furiously. The sunny weather these past few days finally got the Passiflora blooming. 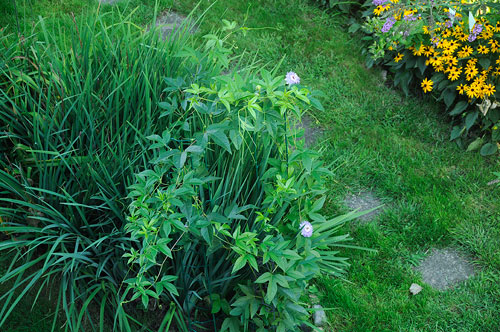 Our plant was originally purchased at Logee’s in Connecticut eight years ago. It has been propagated over a dozen time. Some of the cuttings were given to friends, others have been planted in the RainyDayGarden with the hope that they would take root permanently. This was the first year which the plant has survived the cold.

One thing we never get tired of is looking at or taking photos of the amazing multi-layer blooms. Maybe it is the tenticles, maybe it is the spots, but the flower looks like something from outer space. The flower is the perfect landing platform for bumblebees, further cementing its space alien looks.

In the short time we were out taking these photos (Nikon D90, Nikkor 50mm 1.8 lens), about a dozen bumblebees took off and landed on the flower. The pollens were deposited on their backs as they rubbed past the pistles. Some of them appeared drunk after interacting with the flower.

The Passiflora appears to be well established, but we are going to take a few cuttings and start a bunch of new plants anyway. It is cheap insurance as this is one plant we would hate to lose.