We found this SJÖBERGS workbench for sale on–where else–Craigslist. Those who know workbenches know the name SJÖBERGS. This Swedish company has been making top-quality workbenches for over 80 years. Their workbenches are prized by woodworkers the world over. The one up for sale was a much older design. In fact, SJÖBERGS no longer produces this particular model. 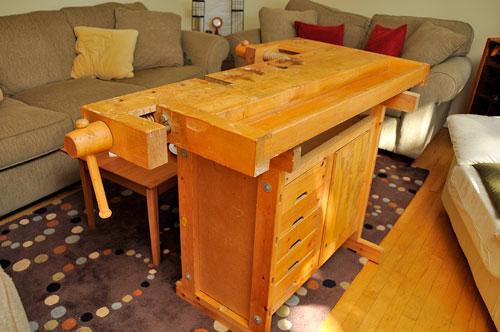 After a bit of negotiation, we got the price down to something we could afford, sealed the deal, and arranged a time for pick up. As the bench was in Lakeville (about 40 minutes south of Boston), getting it back to the office required some help. Fortunately, one of our writers, Jay, was able to lend a hand. Transporting it was made a lot easier because we were able to separate the top from the cabinet (held together by two large bolts). 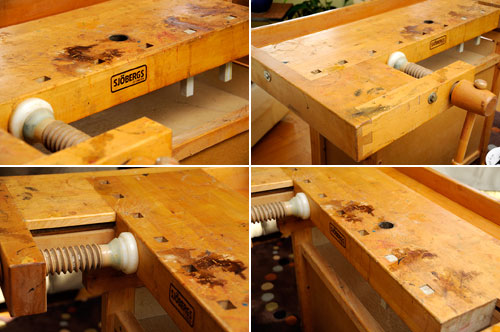 Clearly the previous owner actually used the bench, as the top showed the expected nicks, scratches, and stains. However, the overall structural condition of the workbench was very good…no cracks, splits, or any other major issues. There was a slight bit of wobble with the legs, but that was because some of the steel bolts had worked themselves loose from the cross dowels over the years. Retightening the bolts here and there firmed things up nicely. The only thing which needed some work was the bench top.

We liked the fact that the bench had seen some action and had the scars to show for it. The blemishes gave it character. So instead of refinishing the entire workbench, we decided to just refinish the very top and leave all of its other areas untouched. Fortunately for us, the weather was quite nice and we were able to set the bench up outside for the sanding work. Good thing we did as even though the belt sander made quick work of removing the stains, scratches, and old finish, it was much simpler to be able to just brush off the dust and let the wind take it away 🙂

The sanding was able to remove most but not all of the scratches. Some of them were too deep, and we thought it not worth the effort as it would take more off the top than we would have liked. Our goal was not to get the top to be like new, just cleaner and less stained. 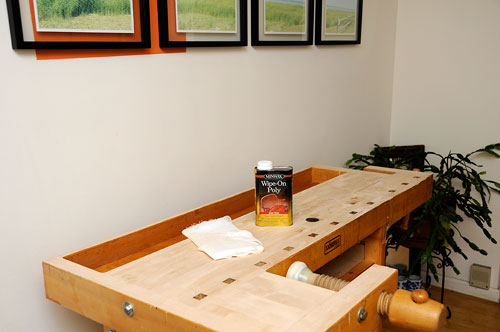 With the surface sanded, it was time to protect it with some Wipe-On Poly. We have had great success with the Minwax brand. The Wipe-On Poly is exactly as the name says. All that is needed is some cheese cloth and a well-ventilated area, and you are good to go. The nice thing about doing it this way is that there is little chance of putting on too much at one time. The other nice thing is there is nothing to clean up…just toss the wad of cloth when you are done. 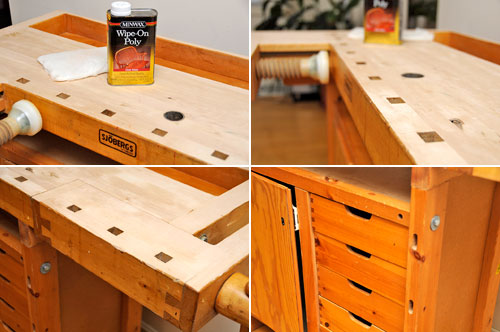 Prepping the surface of the bench was simple. All that was necessary was to make sure the surface was free of grease and dust. As we had sanded the surface clean, we wiped off the dust and applied the Wipe-On Poly. The best way to apply it is with a damp or tacky cloth. We were planning on just wiping on two coats, but the newly sanded surface just drank it up. Six coats later, the finish finally started to show. 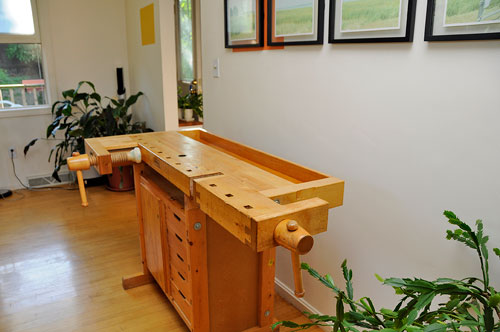 For now, we’ll just let it dry completely. We may do a few more coats depending on how things look in a few days. In any event, the refinished top looks great and should be good for years of service before it will have to be worked on again.