When Apple first announced the iPad, most peopel thought it would be a good alternative to a second or third computer for the home, and the iPad was an instant success. The recently announced iPad2 is looking to be even more popular than its predecessor. Such widespread success is causing businesses to look to the iPad as a laptop replacement. 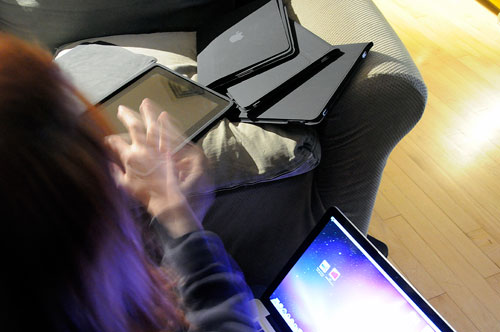 The current iPads does not have enough computing power to be the sole computer for those who need to run business (Excel, Word, etc…) and content creation (Dreamweaver, InDesign, PowerPoint, etc…) applications. However, it can be a reasonable alternative to laptops for displaying slideshows and presentations at tradeshows, sales meetings, and other similar situations. It is a lot easier to prep and bring along a bunch of iPads for a tradeshow than the equivalent in laptops! This is starting to be clear to sales and marketing departments at many businesses. 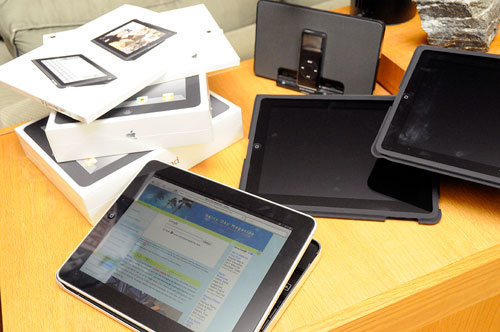 Most iPad accessories makers have been focusing their efforts on designing cases and stands, but a few have branched out with products to make the iPad easier to hold. The growing popularity of using iPads at tradeshows and in sales situations is one of the reasons why we wanted to take a look at iPad carriers, specifically hand straps and slings. We thought it would be helpful to take a look at what is out there and to review some of the more noteworthy units currently available. The three products we selected (ModulR, OtterBox, Belkin) are similar in some aspects, but have their own unique attributes. 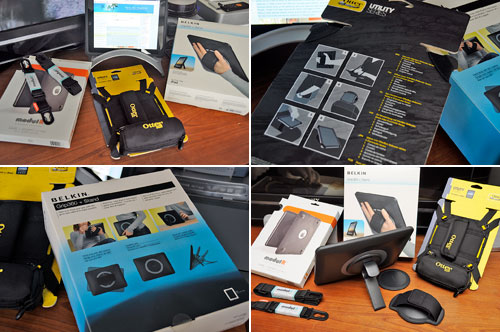 Belkin has put together a very innovative setup with the Grip360. It is a set of three components (stand, grip, cover) that can protect the iPad while giving maximum flexibility in carry options.

The Latch from OtterBox is a carry and use harness setup. There are six different ways the Latch may be used with the iPad. The advantage of the Latch is its design will work with any iPad regardless of whether they are in a case or not.

ModulR is a system built around a protective case. The case can has a wall mount, a stand, and straps for shoulder and hand carry. We have looked at the wall mount and desk stand in a previous series. They have recently started shipping the shoulder and hand straps for the case. It looks to be a very low cost way to further enhance the usability of the ModulR system. We are eager to give it a try.

We will have a more detailed FirstLook of all three units soon. Look for it in April. We also hope to take our iPad with us to a few upcoming tradeshows in April and see how they perform in actual use. Give us a ping if you have a suggestion of a strap or carry system you think would be a good addition to this series. We’ll be happy to take a look.