Last August we wrote a piece called “Two Hundred Light Years.” In it we discussed just how enormous is the known Universe using the “200-light year” metric. 200-light years is the distance traveled in space to date by the very first radio transmissions broadcasted on Earth. Similar to a two-dimensional ripple on a pond, this first broadcast rippled out into space, but as a 3-D bubble in every direction. The photo in that article showed just how far that distance is relative to the overall size of the galaxy of which Earth is a part, and there are hundreds of billions of other galaxies out there… 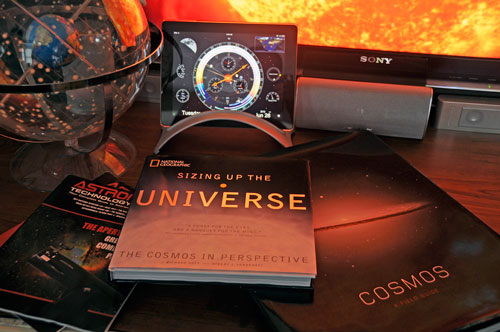 Most of us can relate to the numbers 100, 1,000, and even 1,000,000. They are numbers we can visualize and say “Yeah, I see what you mean.” For most of us, though, it is difficult to get a sense of how large the numbers  quadrillion, googol, and  googolplexreally are (apparently “gazillion” is not a real number). Instead, we have to use scales like astronomical unit (the distance between the Earth and the Sun), light-year (the distance light travels in a year), and Parsec (we leave this as an exercise for the reader), which are based on things of which we already have frame of reference. Of course, even those terms do not properly convey the sense of scale to the average person. 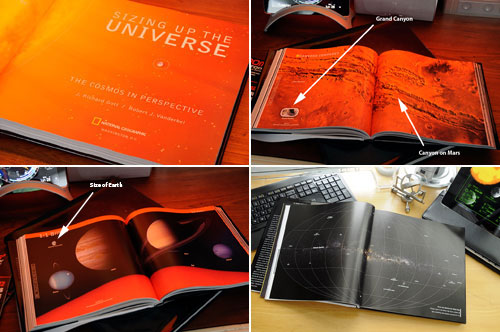 Recently, we came across a wonderful book called Sizing Up The Universe by a couple of Princeton astrophysicists (J. Richard Gott, Robert J. Vanderbei) and published by National Geographic. In it, the authors try to help the reader get a better feel for the size, distance, and scale of things “out there” in the Universe. By referencing the familiar (Grand Canyon, Earth), Gott and Vanderbei give the readers a point of reference. They then continue to scale up, first galactically, then inter-galactically. While the sizes and numbers are enormous, being able to compare things visually gave us a perspective no other means can provide. 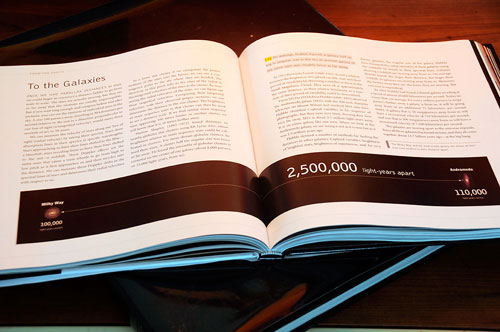 So just how big IS the Universe? The answer, at the very least, will blow your mind. Think about it hard enough, it just may quite possible make your head explode. In any case, you should definitely get the book and find out! [Permalink] –