We have been using the iPad since the day it was available. It has been no secret that we think it is a game changer. However, it does not mean we think the iPad is perfect. There are things we wish Apple had done differently, made better, or included. One of the things we wish Apple had included is a standard USB port or an SD card reader. When in the field, were hoping we would be able to use the iPad as a digital lightbox. The iPad’s size, weight, and long battery life would have made it a perfect tool for quickly checking the quality of an image without having to lug around a laptop. However, there are no built-in mechanism for attaching a camera to or insert a CF card into the iPad. The only way to “talk” to the iPad is via the optional Camera Connection Kit accessory. 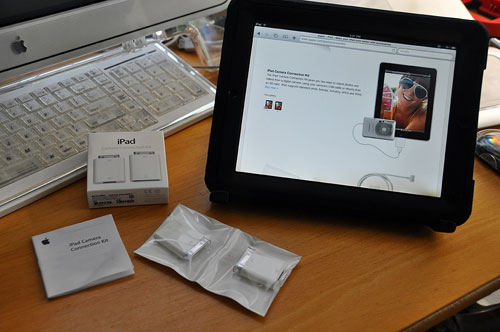 Since the kit is optional, the least Apple could have done was make the Camera Connection Kit more widely stocked at launch time. After waiting months for the kit to become available, we were finally told that we needed to order it through the online store. When we did order it, the wait was another six weeks. How difficult could it be to make a USB connector? Why wasn’t one integrated into the side of the case in the first place? A CF slot would have been a nice way to expand the iPad’s storage or to move files in and out of the iPad (hmmm…).

To add insult to injury, the Camera Connection Kit was implemented as two separate connectors. One is for connecting a camera to the iPad, the other is for reading from a CF card. Are you kidding me??? There are companies that have managed to squeeze 24 card adapters into a dock the size of a postage stamp. Did we accidentally cross over into Bizarro World? 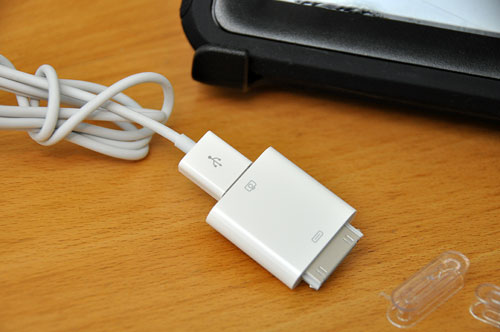 Readers may have sensed a general annoyance we have with the current “solution” because it is so unlike Apple. The impression we have of this kit it that it was an after-thought, a kluge, a hack. Clearly it would not take much to break either the plug on the connector or damage the socket on the iPad. The build-quality of the connectors are high, but it does not negate the fact that connectors themselves should have been unnecessary.

While not an elegant solution by any stretch of the imagination, the Camera Connection Kit is the only mechanism to download images from a camera or CF card directly to the iPad. We hope there will be a better solution in the future. If you want to use the iPad as a digital lightbox, this is the only game in town for the time being. May the time be shortlived.