After having had the pleasure of trying out dozens of different kinds of iPad accessories over the last two years, we realized that some get used way more often then others. It’s not that the ones which don’t get used aren’t any good, it’s just that we have finally settled on a way we use the iPad and some of those accessories better fit with our “way.” Those accessories are:

We found ourselves using the iPad most often for the following tasks: checking email, looking up something on the web, and writing short articles. Where we are doesn’t change how we use our iPad, but it does change how the iPad is set up. When we are at our desks, we like the iPad on a stand so it doesn’t take up much desk space. We looked at a few stands and after using them for a while, we found Innopocket’s HexaPose UStand to be the one we used most. The stand is stable and the grip on the iPad is sure. Putting the iPad on and taking it off is fast and simple. Another reason why we like the stand is that it blends well with the look of the rest of our Apple gear 🙂 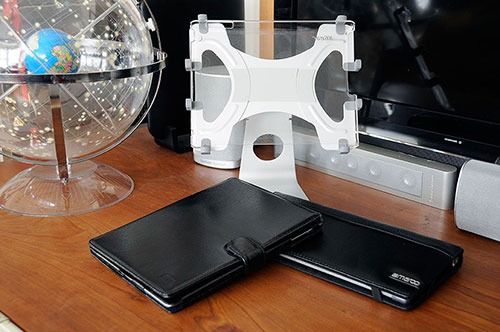 We used to have a protective film on the front of the iPad, but the GorillaGlass is so good that scratches have not been an issue for us. The iPad screens have been “naked” for the past year and a half and have remained scratch-free. The back of the iPad is another story. We protect it using a clear snap-on cover

from XGear. We like it because it is tough and stays on tight, but can be quickly removed when we need to put the iPad into the Sena Folio for travel. We could have put a clear film on the back, but as we use the iPads for product reviews, having film on it can occasionally interfere with the fit.

For protection on-the-go, we carry the iPad in the Sena Leather Folio

. The Sena Folio has a few features which we have grown to appreciate. The case is compact, but can hold quite a bit of stuff (business cards, credit cards, etc). It has a built-in stand to provide a better view angle for typing as well as movie-watching. There is a leather frame which holds the iPad securely, yet lets us remove it without fuss. 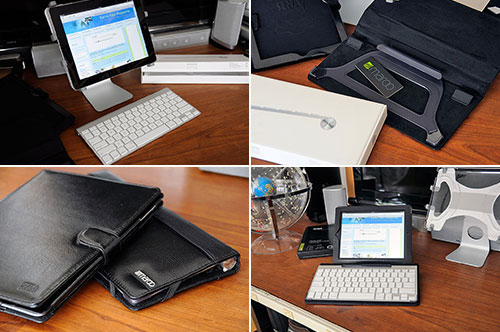 When we first got the iPad, we resisted using a keyboard with it for a few months, but finally realized that we were just being stubborn. There is nothing inherently “wrong” with using a physical keyboard with the iPad when we had to input a lot of text. What was “wrong” was trying to use the smaller iPad keyboards for the job. Originally, we appreciated the convenience of having a keyboard integrated into a case/cover. It made “bringing a keyboard with us” neat and simple. However, what we have noticed was that even using these smaller keyboards could be quite fatiguing for the hands. Our current solution is the when we want to use the iPad for writing, we connect it to an Apple Wireless keyboard. While it is nice to have both form and function, in the end, you can’t compromise function for form. 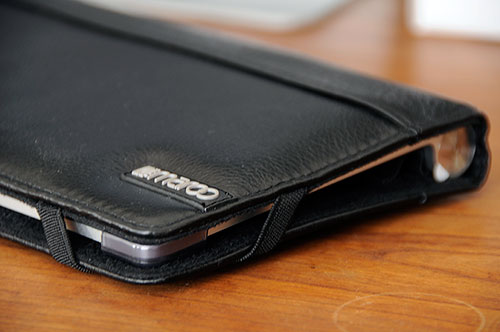 To protect the Apple Wireless keyboard in-the-wild, we pack it in the Maroo Otago case. The case is something we have had since last July, but haven’t posted our thoughts on it until now. The Otago is thoughtfully designed, made with quality material, and well constructed. The lid of the case may be folded back to increase the angle of the keyboard or lay flat depending on which is more comfortable for the user. The keyboard is held in place securely by Maroo’s patent-pending SG Bumpers. Those bumpers and grip hold fast yet releases easily, a seeming contradiction which the folks at Maroo managed to make work in practice. 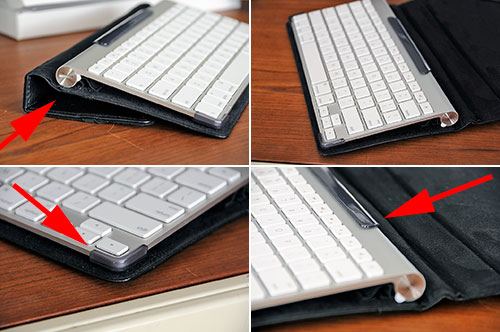 We know that our configuration may not be suitable for everyone, but we thought we would share it because it was based on what we’ve found after two years of use. Let us know if there is gear which you have found to be particularly helpful in how you use the iPad. We are always interested in improving our setup!