We've  spent the last few days getting the pieces of Adobe's Digital Publishing Solution (DPS) downloaded, installed, and running. The DPS is Adobe's set of tools for publishing interactive magazines for the iPad. It is currently in beta testing and is scheduled to be available in Q2 of 2011. The following are the components of the workflow:

This set of tools was developed by Adobe to enable magazine publishers to leverage their print material for the digital tablet market. The basic idea is, with a little extra work, publishers can add value (interactivity, links, etc...), repackage their print material, and deploy to a host of current and future digital devices...all without having to do any programming. It is an attractive proposition. We want to see if Adobe's solution will only work for the big publishing houses or will it also work for the slightly smaller operations like RainyDayMagazine. 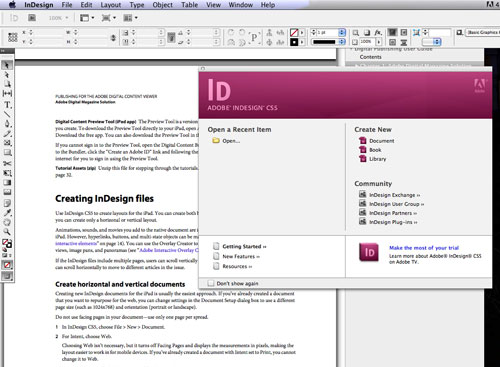 The DPS workflow is based around the latest Creative Suite InDesign application. While InDesign CS5 is the main component of the workflow, there are a few other pieces which help connect everything together. One of the “glue” components is Adobe AIR. AIR is Adobe’s way of enabling the user to have the same interactive web experience no matter what they happen to be using at the time. The other pieces are Interactive Overlay Creator (IOC), the Bundler, and the Viewer. The IOC enables the layout of the things like slideshows, panaromas, and videos. The Bundler packages everything into a file for the iPad. The Viewer is the app on the iPad which enables the user to interact with the content.

As we have never used InDesign before, we took some time getting familiar with its functions and interface. The nice thing about using products which are part of the same suite is many of the features are similar. It did not take us long to get comfortable with InDesign’s user interface. The icons, layout, and general feel of the application was similar to both Dreamweaver and Photoshop. We opened a few simple sample layouts, saw how things were assembled, and learned enough to get started on some of the Adobe tutorials.

The first tutorial was to build a simple magazine advertisement which can be viewed in both the horizontal and vertical orientation on the iPad. The goal was just to verify that all of the pieces of the DPS workflow were functioning appropriately. To make all of the components work together, the data files have to be placed in a certain structure in the Mac’s file system. There is the concept of an “issue,” which is made up of “stacks” containing “folders.” Stacks are all of the pieces (Cover, article1, article2, etc…) of a given issue. Folders are the logical collection of the pieces within a single article. As long as all of the pieces are in the right place, the entire magazine can be properly bundled and made into an app viewable on the iPad.

The Digital Content Bundler (DCB) is the component that takes the various files (text, audio, video, etc…) and strings them together to create a single package or “issue.” Once created, the bundle may then be uploaded to the iPad and viewed using the viewer Adobe Preview Tool (APT). Note that the APT is only used for testing. When the content is published for real, each publisher will have their own version of the Viewer with custom branding.

It took some effort to get our head around the publishing model, but by the end of the day, we managed to successfully follow the tutorial, bundle our test issue, and upload it to the iPad. The Preview Tool launched it and it behaved exactly as we expected. While it did take us the entire day to work through this first tutorial, none of the problems we had were related to the tools. They had more to do with aligning our mental model of how things should work with Adobe’s structure of how things will work. When we finally got things sorted out in our head, we realized that while it is particular, the Adobe DPS workflow is very logical. This is very cool stuff. Our next goal is to tackle the creation of a more interactive issue.