Everyone has heard of Magna Carta, but few have had the privilege of seeing the 800-year-old document in person. Magna Carta, written in 1215, is the foundation of much what most have come to agree as how society should behave today, governed by the rule of law instead of by the arbitrary decrees and whims of a ruler. How amazing is that? In any case, one of the four surviving copies, which normally resides at Lincoln Cathedral, will be on display at the MFA between July 2nd and September 1st, 2014. 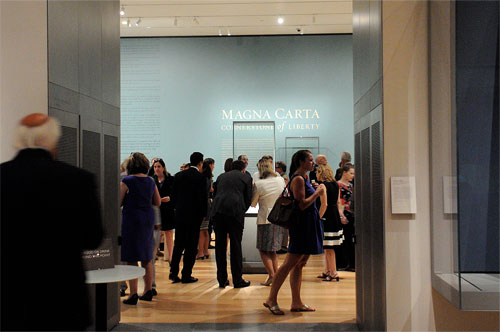 On Monday, the crew from RainyDayMagazine was on hand to see the unveiling of the opening of  Magna Carta: Cornerstone of Liberty. The exhibit was, of course, timed to coincide with the coming of the Forth of July. 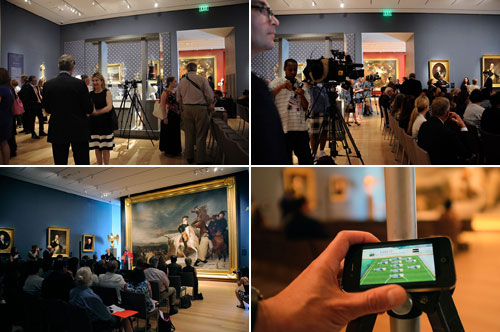 While we like 800-year-old-documents-that-provide-the-cornerstone-of-Democracy as much as the next guy, the 4:00PM start time for the Preview coincided exactly with the start of the Germany-Algeria FIFA World Cup match. Thank god for the WatchESPN app!

The exhibition was organized by the Museum of Fine Arts in partnership with the Massachusetts Historical Society and Lincoln Cathedral, and generously supported by the Commonwealth of Massachusetts. Traveling with the priceless document was the Very Reverend Philip Buckler, Dean of Lincoln, mostly, we suspect, to make sure we give it back 🙂 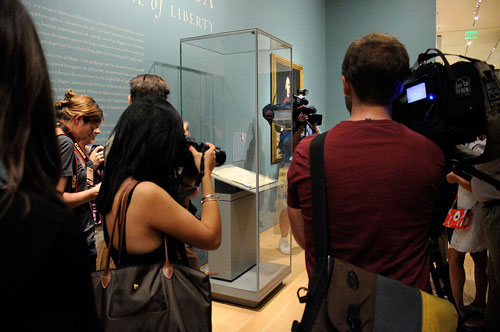 A little bit about the document itself. Magna Carta was penned using iron gall ink on parchment. Parchment is a material made from animal skin; normally calfskin, sheepskin, or goatskin soaked in lime, then stretched on a frame to dry under tension. When the skin had dried, it was scraped with a curved knife to produce a smooth writing surface. This is also the reason why the physical document lasted so long. Paper would have disintegrated centuries ago as conservation methods were a bit more lax back then.

The text of Magna Carta was written in medieval Latin using the typical handwriting found in English documents in the 1200s. The scribes used the accepted practice of shortening words in order to save space, mainly because parchment was so expensive to make. 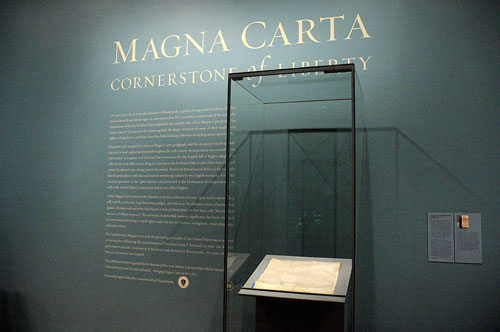 The display of Magna Carta joins art from the MFA’s collection and other historical loans as well as portraits and works—including two manuscript copies of the Declaration of Independence, originally penned by John Adams and Thomas Jefferson. 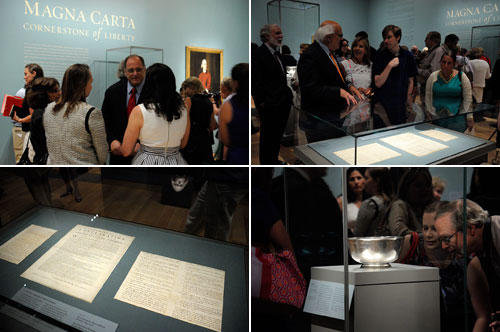 Also in the exhibit is Paul Revere’s Sons of Liberty Bowl (1768), which is engraved with the words “Magna/Charta” and “Bill of/Rights”—to tell the story of patriots and revolutionaries who fought for freedom in the face of tyranny. 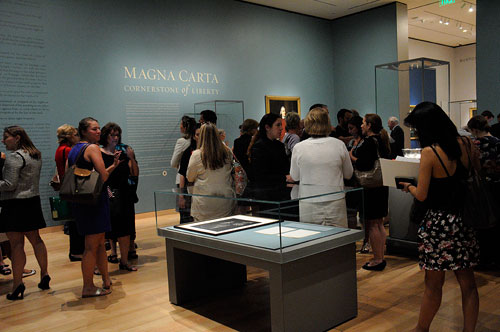 Magna Carta leaves the MFA September 1 and travels to the Sterling and Francine Clark Art Institute in Williamstown, Massachusetts, and the Law Library of Congressin Washington, DC, before returning to London for an exhibition celebrating the charter’s 800th anniversary in 2015. So if you are in Boston between now and the end of August, this is one “must see” exhibit while you are in town.

NOTE: BTW, at the 800th anniversary in London, all four surviving copies will be shown together for the first time! It is going to be a big deal!

To can read a slightly different take on the exhibit written by our ne’er-a-comma-out-of-place copy editor Carolyn Donovan over at her website, click here.