The Museum of Fine Arts, Boston, is renowned the world over for breadth and depth of its Japanese collection, holding as it does over 100,000 artefacts. When we heard that the MFA was going to put together an exhibit of samurai armor, we naturally assumed that it would be drawing from its archives and showcasing some of the pieces not often displayed to the public. But, we were wrong: the MFA’s  “Samurai! Armor from the Ann and Gabriel Barbier-Mueller Collection” exhibit was organized by the Ann & Barbier-Mueller Museum in Dallas, in collaboration with the MFA, and features outstanding items from a private collection. According to Malcom Rogers, Ann and Graham Gund Director of the MFA, “This exhibition superbly complements the Museum’s own collection of works from Japan because the MFA is weaker in this particular area.” Now to say the MFA is “weak” in any particular aspect of their Japanese collection is to say the New England Patriots is “weak” in their offensive options, but we digress. 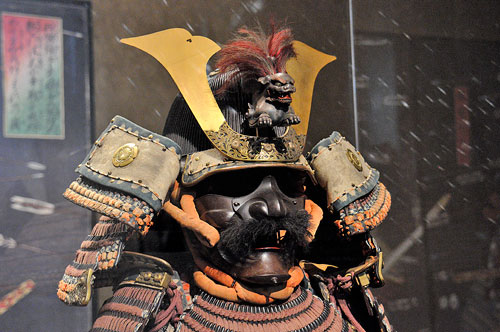 The incredible quality of this exhibit is evident at the entrance. Visitors are greeted by three suits of armor, any one of which could’ve been the centerpiece of an exhibit on Japanese armor that would’ve left its viewers satisfied. However, there are 140 more objects from the Ann and Gabriel Barbier-Mueller collection awaiting inside. Be prepared to be overwhelmed by the craftsmanship, details, and sculptural quality of the pieces.

These are not steampunk fantasies, nor are they Hollywood’s version of the shining knight in stainless steel. These were fully functional, battle-ready, works of war/art. They were passed down through the generations, and brought along with them the honor, sacrifices, and obligations of those who had worn them. 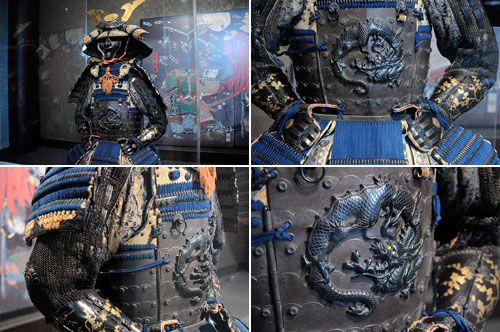 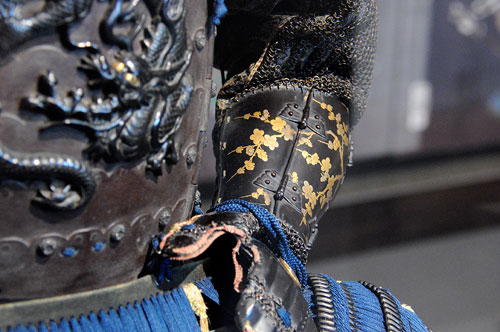 While “soul of the samurai” is the sword, the “heart of a samurai” is service. The direct translation of “samurai” is “to serve.” Service to his lord, his shogun, and his emperor. To serve well, samurai must excel more than just martially, they must exel in all aspects of their life. To be samurai was to have that attitude, that way of being, in how they viewed the world and their place in it. 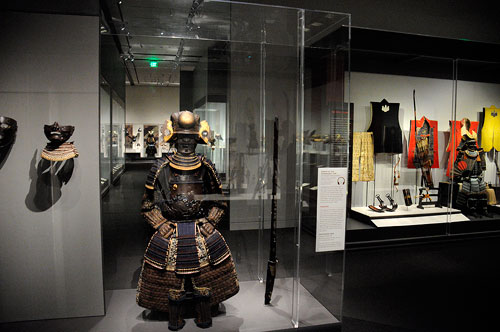 A samurai’s life was not spartan or austere. They reveled in beauty, grace, and the constant reach for perfection. This attitude was clearly reflected in the samurai’s armor and all which went with it: helmets of lacquered metal adorned with emblems, many inspired by animals and other  nature motifs; weapons; horse armor; and accoutrements for both battle and ceremonies.

However, one thing must be kept in mind when looking at the items. No matter how ornate the piece or intricate the design, nothing takes away from the effectiveness or functionality of the armor itself. In fact, extra credit will go to those who can find the armor with the dents from musket balls (in the exhibit, not these photos). 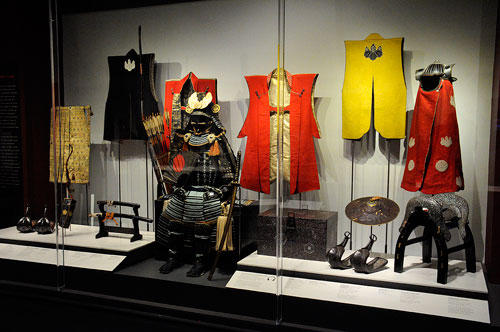 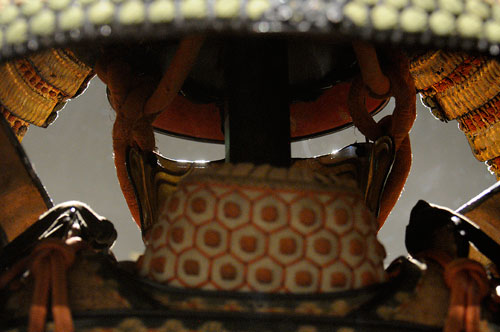 All of the pieces are fascinating individually, but to see them assembled on a mannequin posed for action was fantastic. In one of the rooms three armored horses carrying combat-ready samurai in full regalia were on one side while facing the riders down on the other side were five samurai in full battle armor. This is clearly one of the most dramatic stagings we have ever seen for an exhibit of this nature. 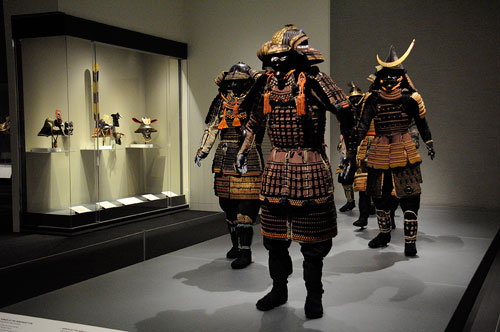 We have only given you a small taste of what is in the multi-room exhibit. There is simply too much to see and one visit will definitely not be enough. We urge you to plan accordingly. We expect to go back at least a half a dozen times before it leaves town.

The Samurai! exhibit  opens on April 14 and will run until August 4th. There will be special film screenings, “Samurai Saturday” events, and other related activitiesduring the run of the exhibition. Please check the MFA calendar for times and details.