The folks at RainyDayMagazine have made a few trips out to the Atlantic over the years to experience the thrill of watching whales feed, folic, and do other whale-y things in their natural habitat. However, as much fun as our last trip out was, it was seven years ago. We thought it time to book a "refresher" trip :-) The cruise where we had the least success seeing whales was the one ran by Boston Harbor Cruises (BHC), so we thought we would give them a chance to redeem themselves (we are KIDDING, we know they don't have the whales on speed dial). 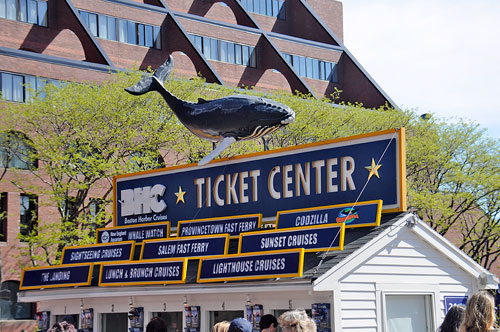 BHC’s ticket center is conveniently located at the wharf next to the New England Aquarium downtown. Their whale watch cruises are 3-hours long and depending on the time of year, they go out up to six times a day. BHC can do this because they use high-speed catamarans to ferry folks out and back. You spend less time getting there and back and more time looking for and/or watching whales.

BHC’s favorite destination is the Stellwagen Bank National Marine Sanctuary. The location is known as a rich feeding ground and a hot gathering spot for whales such as humpback, finback, and minke. Even the critically endangered right whales have been known to make an appearance.

All of these images were taken with the Nikon D90 with the 18-300mm zoom. We chose the Nikkor 18-300mm because the range enabled us to grab a wide field or zoom in close as the situation required. We also knew there would not be enough time to change lenses, nor would it be a good idea to do so with salt water spraying about.

On this particular trip, we saw nothing by humpbacks. However, we saw close to fifty of them! They were everywhere. With that many whales about, it was not difficult to get a variety of shots. The only thing tricky about the shoot was that the whales moved surprisingly quickly and the boat rocked a bit more then anticipated. It was also kind of hard to give a sense of scale to these creatures as there was not a lot out there to use as a reference. Sea gulls flying around the whales does help, but they themselves are pretty big birds. The best opportunity came when one of the whales surfaced next to another vessel parallel to us. We got a few shots of the tail when it was next to the boat. In that instance, one can really get a sense of just how immense these creatures are.

Getting out on the water is a great way to escape oppressive heat and humidity; being able to watch some whales is just a bonus! BHC runs it trips from May well into November. If you don’t see any whales, they will even give you a voucher to go out again another day. So as a RainyDayDestinations recommendation goes, this one is pretty much a slam dunk.