It is the second day of our week in L.A. We thought we had slept in, but it was only 5 A.M. when we were dressed and ready. To slow us down and help shift our clocks, we decided to stretch the day out (meaning: no naps) and stay up later into the night. Spent most of the day in the L.A. County Arboretum and Botanical Garden. The L.A. Arboretum is a historical site jointly operated by the Los Angeles Arboretum Foundation and the Los Angeles County Department of Parks and Recreation, and is located in the city of Arcadia. 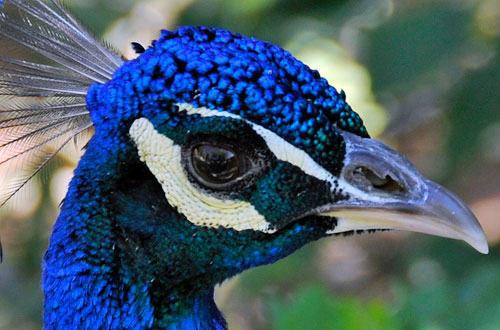 Visitors to the 127 acre acre botanical garden are often greeted by the free-roaming peafowls. Our visit was no exception. We were greeted by a very friendly peacock. Peafowl, Pavo cristatus, were introduced to the botanical garden by Lucky Baldwin in the late 1800’s. Apparently, they were well suited to the garden, as they have thrived. Only the colorful males of this pheasant-related bird species are called peacocks: females are called peahens and the birds as a whole are referred to as peafowl. Not only are they a colorful addition to the garden, the peafowl earn their keep by ensuring that the Arboretum’s snail population stays in check!

Home to plant collections from all over the world, including many rare and endangered species, The Arboretum also houses outdoor historical landmarks representative of the major phases of California history. Their mission is to cultivate the natural, horticultural and historic resources for learning and enjoyment, and to reflect Southern California’s distinct climate. We spent a few hours walking around the L.A. Arboretum. The grounds were quite impressive. There were tons of blooming cacti and flowering Magnolias. We saw a giant Birds of Paradise which was almost two stories tall!

Of all the displays, the ones we were especially taken with were those in the tropical and carnivorous plants greenhouses. The tropical greenhouse has an orchid collection with over 1,700 species, making it one of the largest species collections of orchids in the world. The ones in the hanging baskets are epiphyllum (commonly called orchid cactus). These members of the cactus family are native to the humid jungles of Central and South America. In Greek epiphyllum means “upon the leaf” because it appears that flowers grow directly from the leaf tip. Instead the “leaves” are actually flattened stems, as epiphyllum have no ‘real’ leaves.

The greenhouse is also home to many varieties of showy begonias, ferns, bromeliads, and strands of soft grey-green Spanish moss (Tillandsia usneoides). Spanish moss (not a true moss—it has flowers!), as well as many of the orchids, ferns, and bromeliads we saw in the Tropical Greenhouse, are epiphytic plants. Epiphytes or “air plants” are not rooted in the soil, but instead grow attached to other living plants. Epiphytes should not be confused with parasitic plants as they do not harm the host plant. Epiphytes have various adaptations that allow them to absorb moisture from the air and nutrients from organic debris on their support plant.

The Carnivorous Plants Greenhouse contains the Arboretum’s collection of carnivorous plants. Commonly called pitcher plants, the Arboretum houses many different species within the genus Nepenthes. Native to the steamy tropics of Southeast Asia and Africa, Nepenthes are vines with (usually) long leaves tipped with a tendril ending in a pitcher. Although the often colorful pitcher may look like a flower, it is actually a leaf that has been modified into a pitfall trap. In general, the pitchers of these plants lure insects with the odor of nectar. Once inside, the insect cannot escape because of the smooth walls coated with a slippery wax. Eventually, the insect falls into the water and its struggle to escape stimulates the release an enzyme that will digest the insect. The plant is then able to absorb the nutrients and distribute them to other parts of the plant.

The L.A. Arboretum and Botanical Garden is a “must-see” when visiting L.A. No need to hurry through the garden. We would recommend packing a picnic lunch and make a day of it. BTW, admission is free on the third Tuesday of the month.