Our Apple iPad showed up late in the afternoon yesterday. We had a previous commitment for the evening so we had to wait to do the "unboxing," but, wow, the wait was worth it. We ordered the 16GB WiFi version of the iPad, which is the least expensive model of the iPad line. Many people consider it a risk to buy the first generation of anything, especially if it is something completely new to the market. In our "previous" life, we were Newton MessagePad developers, so being on the bleeding edge of technology is not uncomfortable for us; actually, it's when we are the most excited. So nobody was surprised that we had no hesitation in plunking down $500 for a device no one had never seen before...especially since the gadget was from Apple. 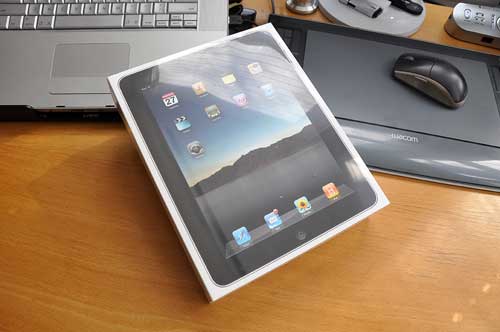 Having unboxed quite a few devices from many different vendors over the years, we are always struck with the particular attention Apple always gives to this aspect of the user experience. The joy of owning an Apple product starts the moment it is unpacked from the shipping container. The product box is visually clean, nicely proportioned, and always well-presented. Apple manages to create an emotional bond with the buyer with the just the simple act of lifting the box cover to reveal the product.

The box’s content was neatly organized, well laid out, and easy to remove. There were no ugly twist-ties, rattling pieces, or loose bits to spoil the mini-ceremony. Even the process of removing the clear plastic wrapping around the device is a pleasurable experience.

With everything unpacked, examined, and out of the box, it was time to turn it on and set things up. The directions could not be simplier. The iPad requires the latest version of iTunes (free download from Apple) for the setup.

The entire process took about five minutes and was fairly typical. We were asked to register the iPad, to setup an iTunes account (which we already had), and whether we wanted to sync the iPad with the various data (music, photos, apps) we had on our iPod Touch. We answered the questions, waited for the process to complete, and as ususal, did not encounter any problems.

iPhone apps which worked on the iPhone and iPod Touches will work on the new Apple iPad. Those apps will run, but they will not take advantage of the larger screen’s real estate. At launch time, the AppStore also had a large selection of apps written specifically for the iPad. Many of them are fee-based, but there are plenty of free ones available as well. We selected a few which looked interesting. For obvious reasons, we were specifically interested in the apps from media outlets and publishing houses such as WSJ, NPR, and BBC News.

The Apple iPad is here. It is going to be the most talked about gadget ever and the enthusiasm is completely justified. The “sunsetting” of the mouse/pointer interface has started. The mouse/pointer paradigm is over twenty years old. Multi-touch for the masses has arrived and it is about time. With the introduction of the iPad Apple has made accessible an entirely new way to interact with not only a computer but information itself. We will have a complete rundown on the iPad, the apps, and accessories over the course of the month.