Most of the plants in the RainyDayGarden are perennials. When a plant gets too big for its location, the interns will split it. They will either trade it for something we don’t have or create a new spot for it in the garden. Of course, splitting a plant is not the only way to propagate perennials. Many of the perennials in the RainyDayGarden also generate a lot of seeds. Most of the time, we just let the birds have at them. Every once in a while, though, we collect some just to hone our seed-propagating skills. This is what we did this year with the iris pods. 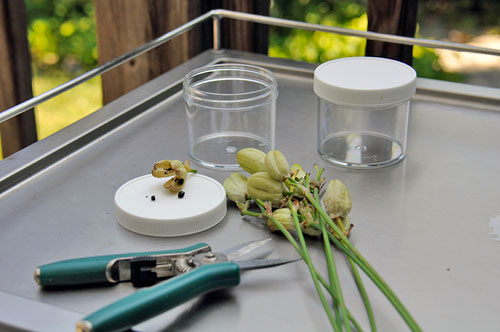 We had hundreds of iris blooms this year in the RainyDayGarden. It was a little surprising because we had split them last June and didn’t think they would be that vigorous this season. In August, we noticed that we had a large number of pods on the stalks and thought it might be interesting to collect some and try sprouting them next Spring.

We had never collected iris pods before, but assumed that it would be logical to pick them when they started to open. However, we had a little trouble getting our timing right. By the time we noticed that they had opened, most of them had already been picked clean by the birds. So after a week of trying, we decided to collect them when they looked like they were about to pop. When we opened them manually, the seeds from some of the pods were green while the seeds from other pods were black and shiny. We kept them all as we were not sure which ones were viable.

Just to see if we could get any of them to sprout, we dropped a few into three pots filled with a light potting mix. Sure enough, shoots started to poke out after a week. We are not sure how far these new seedlings will go as they are quite out of phase with their normal cycle. 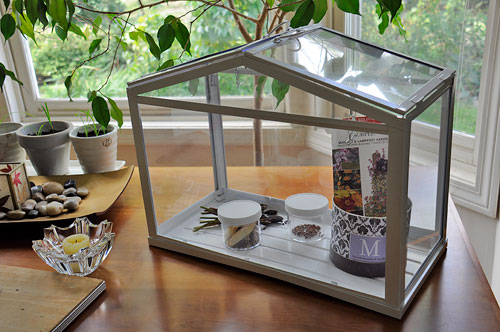 We will move them into a richer potting mix in another week and see what happens. For now, we have the seeds safely stowed away. When the time comes, we’ll get things going in our IKEA Socker desktop greenhouse. Look for the results next Spring.