We  stopped buying pre-made sodas and started using the Soda Stream machines to make our fizzy drinks way back when. It was not long before we each developed our own personal favorite level of carbonation for our sodas. The amount of carbonation would not only be different for each individual, it would also be different for diffent flavors. Being able to reliably replicate a carbonation level meant counting the number and duration of our presses. When SodaStream introduced the  Fizz with the carbonation-level indicator, we were eager to check it out. It would put an end to the “was it four or five presses I did before you interrupted me” dialog in the RainyDayKitchen. Well mostly. 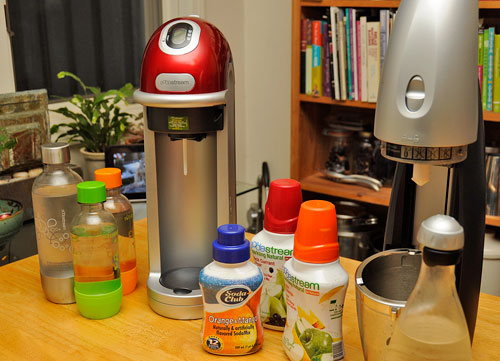 After some side-by-side comparison of the Fizz with our other soda makers, we all agreed that we like the new unit. It is compact, light weight, and great looking. Getting the bottle on and off the unit is quick and simple. Moving the gas-release mechanism to the front is a nice change and makes it even easier to use. The biggest thing about the Fizz is the LCD indicator. It gives a readout of both the level of C02 left in the tank and the level of carbonation in the water. We still don’t know how they do this, but it works pretty well.

At first we were disappointed when we realized that we could not program the low-mid-high settings to our taste, but after using it, we realized that it was unnecessary. The 3-level indicator is good enough and there is no need to complicate matters. The one thing we would love to see in the future is a counter showing the number of presses. Now THAT would put an end to the “was it four or five times that you pressed that thing” conversations that sometimes goes on around here.

We did notice an odd thing regarding the bottles. We found that our older bottles actually worked better with the Fizz than the one which came with the unit. We are not quite sure why, but we were unable to get the Fizz indicator to go up to the highest level using the newer bottles, big or small. It may have something to do with the fit, but if you find that the indicator is not responding well, try a different bottle and see if it makes a difference. We had actually returned one of the Fizz unit thinking it was defective before we stumbled upon this solution. 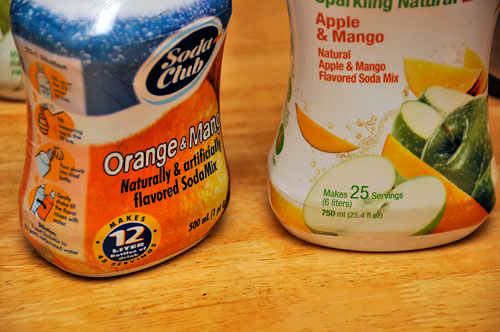 Along with the new machine, SodaStream also introduced a host of new flavors and a new bottle/cap design. The syrup bottles are bigger, but they actually make half as much soda as previous bottle. This is because the syrup is half as concentrated. The old bottles made 12 liters/48 servings. The newer bigger bottles now makes 6 liters/25 servings. However, since it is still a great value, we can let it slide. The problem is that by diluting the syrup, SodaSteam had to redesign the cap so that users can still add just one cap to one bottle.

The old cap was a cup inside the screw-on cap. The new cap is a cup and a separate screw-on inner cap. With the old cap, any syrup left in the cup dripped back into the mix. With the separate cup/cap design, the cup must be washed before putting it back on the bottle or syrup will get all over the outside of the bottle. It might seem a trivial extra step, but it is actually kind of a pain. SodaStream, we love you guys, but don’t make things harder on your customers just to preserve the serving-size illusion. Bring back the cup in the cap!