Wacom  is the acknowledged leader in graphics tablets. There are other tablet makers on the market, but none of them can compete with Wacom in terms of features, sensitivity, and variety of offerings. We have been using Wacom tablets since the early 1990s. It has been interesting to see how Wacom has grown, adapted, and maintained their lead in this product category. They made tablets affordable, reliable, and convenient to use for the graphic artist. The key differentiator between Wacom and its competitors has been and continues to be their proprietary wireless input technology. It has enabled Wacom to make lighter, more sensitive pens and mice, none of which need to be charged or require batteries. 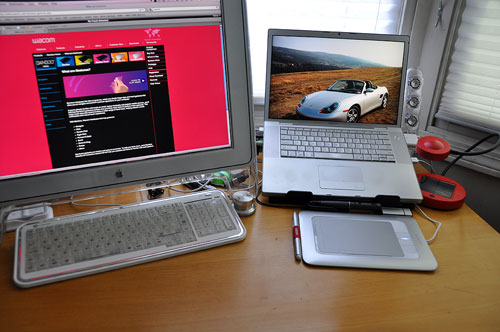 We have reviewed many Wacom tablets (Graphire, Intuos, Bamboo) over the years. The most recent was a FirstLook review of Wacom’s Bamboo Craft in November 2009. The Bamboo Craft is a $130 tablet that can do double duty as a giant multi-touch trackpad. This capability is uniquely available from Wacom, and its utility was something we had not fully appreciated. Until recently, our Bamboo did not get much use because it was attached to a Mac which mainly functioned as a media server. Most of the graphics work was done using the larger Wacom Intuos tablet attached to the Macbook Pro laptop. An office clean up and equipment reorganization gave us the impetus to optimize the layout of a few workstations. We realized it made more sense to move the larger display to the desk with the laptop and move the bigger Intuos tablet from the smaller desk to the larger bench where there was more room.

While we did gain some physical desktop space by swapping tablets, pairing the larger Cinema display with the laptop meant we would not be using the laptop’s keyboard as the main input device. The configuration also required us to reach over to use the laptop’s trackpad for cursor control, a definitely awkward layout. We looked at many of the available options (trackball, wireless mouse, pen) but none of them were optimal…until we remembered the Bamboo tablet also has multi-touch/gestures capabilities. We just needed to activate the feature and we were all set! 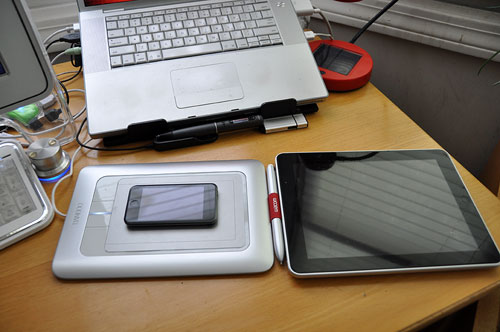 The Wacom Bamboo has a surface area of 9.8″x6.9″ and a touch sensitive area(inside rectangle) of 4.9″x3.4″. As a point of reference, it is not as large as the iPad, but considerably larger than the laptop’s trackpad or the iPod Touch. There are four buttonson the side. The tablet may be oriented and configured for either left- or right-handed use. There is an integrated pen loop on the edge for securing the stylus. Surprisingly, we found it to be preferable to a stand. It kept the pen accessible without the pen contantly tipping over. It was a nice solution to a quirky but incredibly annoying problem. 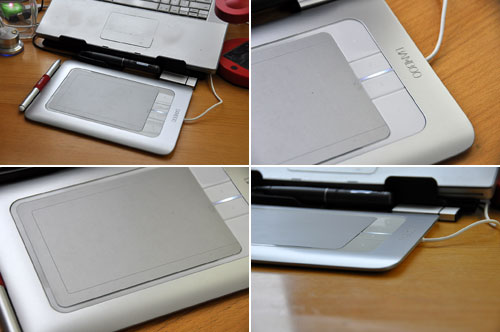 While the Intuos tablet was pretty thin, the Bamboo is easily half as thick and with nicely tapered edges. The combination of the thinness and the tapering made resting the palm on the edge of the tablet very comfortable. The surface of the tablet is textured to feel like pen-on-paper when using the stylus. Gliding and tapping on the surface is like running your finger tips on very finely frosted glass. There is no snag, but neither is it slick. Kudos to the Wacom usability engineers for their attention to these ergonomic details. 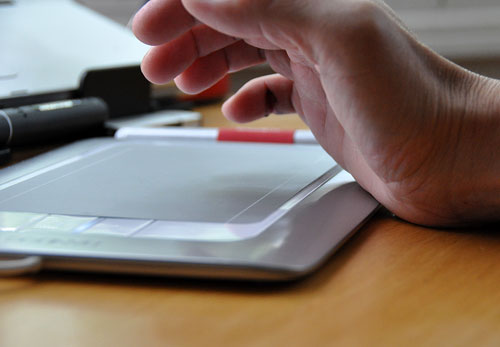 Multi-Touch support means one or more fingers may be used to interact with documents, images, and applications. Simple gestures such as using two fingers to activate scrolling makes it easy to smoothly move up and down a document or web page. The Wacom Bamboo also supports more advanced gestures such as “flicking” for inertial scrolling, pinching for zooming, and click/spin for image rotation. Fine-tuning of these gestures may be made via the Wacom panel in Systems Preferences.

While we may miss having the larger work area of the Intuos tablet, we definitely welcome having more space and less clutter. So if your analog desktop is getting crowded, you may be able to get rid of a few gadgets by replacing them with something like a Wacom Bamboo tablet. It requires less space than our Intuos tablet, has more functionality than a mouse, and gives us the capabilities of both a tablet and a trackpad. Wacom Bamboo tablets, they are not just for graphic artists anymore!