Friends of RainyDayMagazine gave us a bonsai kit for Christmas. We sowed them on New Year’s Day and will be chronicling our bonsai journey…for many years, apparently.

After two weeks, three of the four types of seeds have sprouted. Of course, our RainyDayIntern Eliot has taken sole credit for the success. 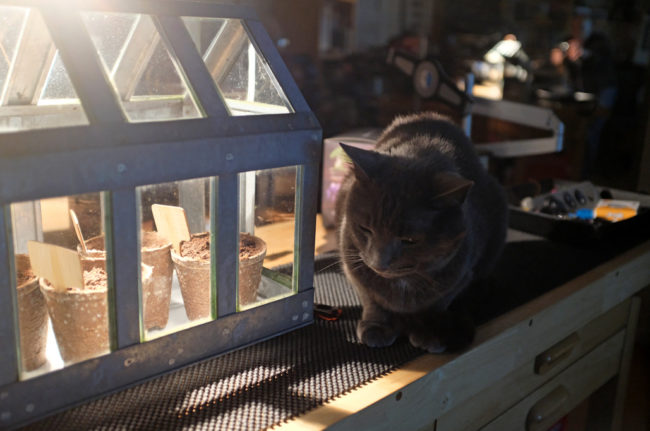 The real secret? We used a halogen lamp to keep the temperature inside the green house high, and we created a daily practice of misting to keep the humidity up.

One thing we had to keep an eye on is that the high temp/high humidity combo could create an opportunity for mold growth. We did have a little bit (look closely at the side of the pots for spots of white), but we caught and dealt with it in time. 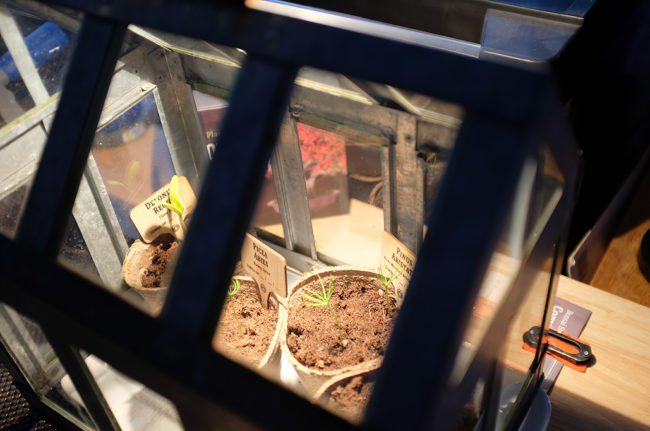 We took great care not to water too much, and definitely didn’t allow any standing water in the tray. We also removed the greenhouse cover for a few hours each day to allow the air to circulate.

That combination apparently worked as three of the four types of seeds germinated within two week. The Black Poui was the only laggard of the bunch. 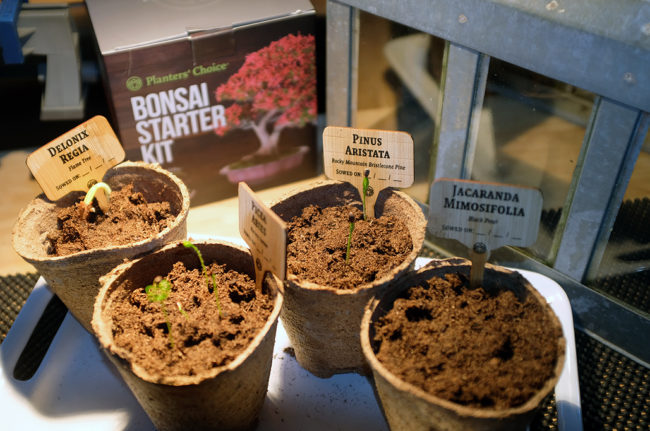 Often rated in the top 5 most beautiful flowering trees in the world, Delonix Regia is native to Madagascar. It is noted for its fern-like leaves and flamboyant display of flowers. The Flame Tree seed was also the first one to “come to life.” 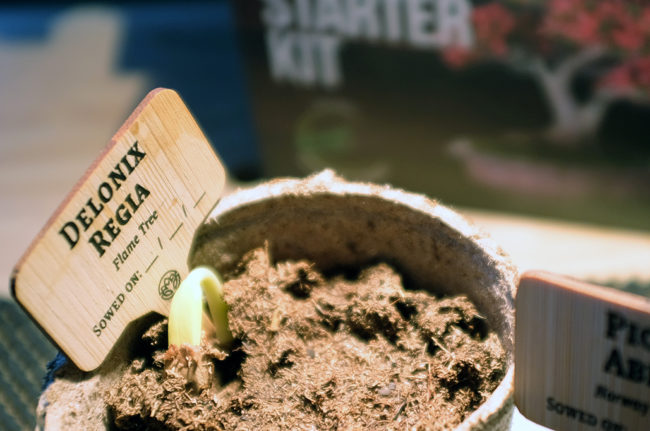 We planted three Flame Tree seeds, and one of them poked up in 8 days. The first set of leaves opened a few more days later. We are very excited about “our” Flame Tree, as the photos of a mature tree look stunning!!! 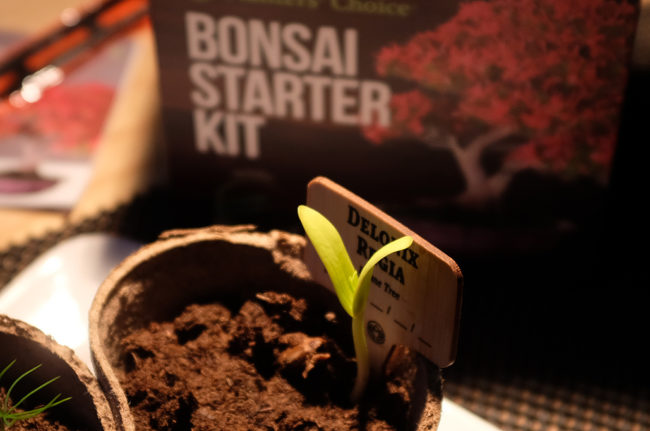 Picea Abies is a large, fast-growing evergreen coniferous tree growing to 115–180 feet tall with a trunk diameter of 39-59 inches. We will probably not let it get quite that big 🙂

BTW, a lot of people also know this species as the “Christmas Tree.” 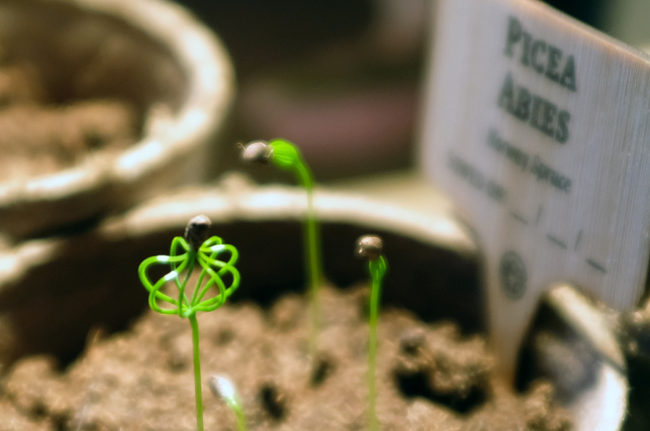 The Norway Spruce came up about a day after the Flame Tree. Four of the seeds germinated and they all looked equally healthy. We may have to get rid of two so there will be enough room. OK, we will probably try to move them to other pots 🙂

Gotta love the “basket” that developed before the pod fell off. The odd looking shape before the first leaves fully extend was pretty cool as well! 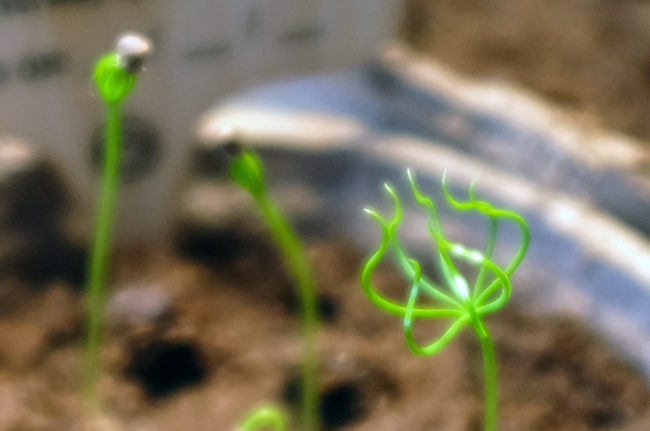 Pinus Aristata is a species of pine found in the Rocky Mountains of Colorado, northern New Mexico, and Arizona. Bristlecone pine’s root system is highly branched and shallow, making it very drought tolerant. The wood is very dense and resinous, making it resistant to insects, fungi, and other potential pests. 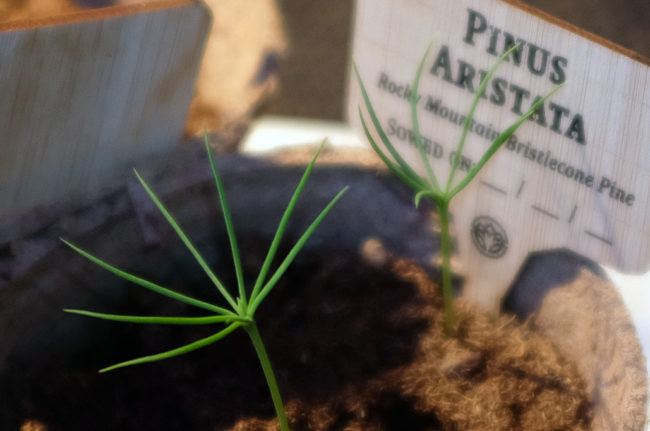 The Bristlecone Pine came straight out of the soil and opened right up about 12 days in. The shape of the first leaves are similar to the Norway Spruce, just a little longer and straighter.

The Jacaranda Mimosifolia is a sub-tropical tree native to South America. It has beautiful and long-lasting blue flowers. Unfortunately, nothing yet after 14 days. 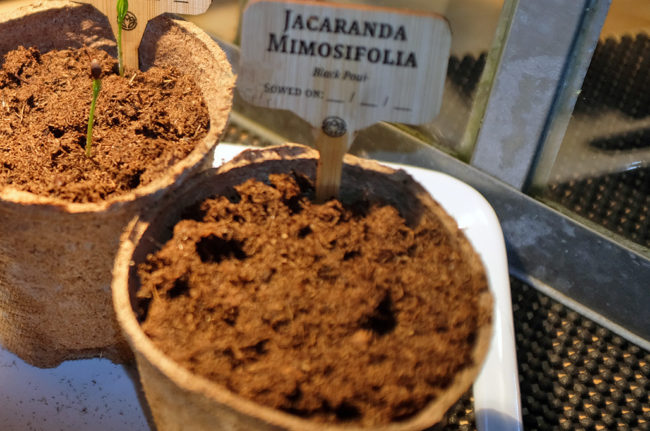 We are starting to suspect Eliot’s sudden interest in bonsai may have something to do with the heat lamp. We’ll see if the vigil continues once we switch off the heat and turn on the full-spectrum LED grow light 🙂 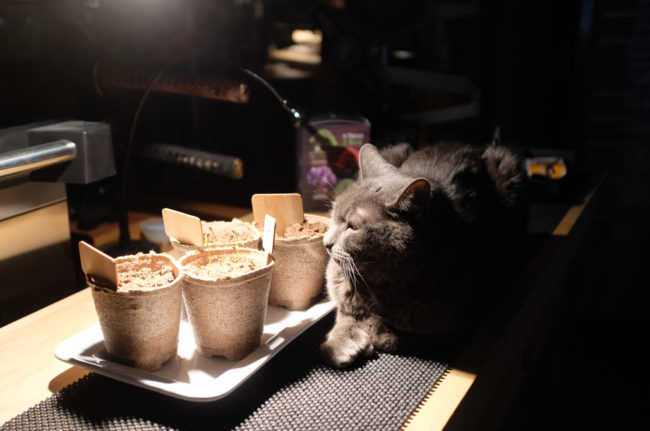