In early January we posted a FirstLook of the Vixen Polarie Star Tracker. As astrophotography is still a bit of a niche hobby, the number of questions we got about it were surprising. We took it as a good sign for Vixen, as they clearly have tapped into a market with some pent-up desires. As a result of the Star Tracker review, some readers asked us about Vixen's Polar Axis Scope accessory as well. We took a look and found the Scope to be of a much higher quality than others we have seen. Interested readers may appreciate this opportunity for a closer inspection of the scope. 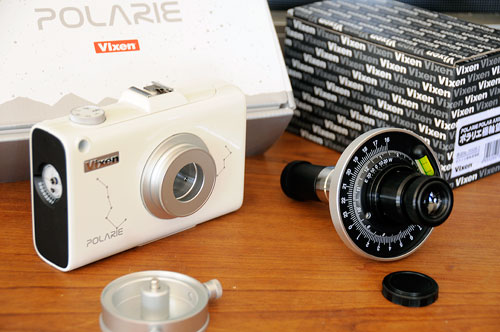 When taking photos of stars, long exposures are often required. When an exposure is longer than a few seconds, the rotation of the Earth will result in the capture of streaks of light instead of points of light. The arcs created by these "star trails" have been used to great artistic effect by numerous astrophotographers. However, those who WANT to capture pin-sharp photos of stars have to compensate for the Earth's rotation by using a properly aligned motorized mount. The Vixen Polar Axis Scope was designed to work with the Polarie Star Tracker to do just that.

The unit is made using high-quality material (aluminum, steel, glass), has a solid feel, and a nice heft. The scope has 6×20 magnification, an 8º angle of view, and diopter adjustments for a sharp focus. On the outer dial is an integrated bubble-level to ensure proper alignment. The scales allow precise setting of the time/date offsets based on the observing site’s relative position to the standard time meridian. OK, while that sounds complicated, it is easy to set with the Vixen Polar Axis Scope. We’ll show how in the next article of this series.

The Polarie Star Tracker is compact and mobile, so getting yourself out there and capturing dramatic wide-field astrophotos is now within reach of many more photographers. However, in order for the mount to track properly, it must aligned with a point in the sky which is in-line with the rotational axis of the Earth. That may sound complicated (again), but it is quite simple to do (again). Instructions are as follows:

Once set, the mount rotates at the same rate as the Earth, and everything will “be” stationary, from the perspective of the rotating mount.

In the next installment of this series, we’ll show how everything comes together (mount, camera, tripod, etc…). Our plan is then to pack everything up and take it out somewhere dark for a FirstUse test. Look for the write-ups in March. Clear skies!!!