To kick off 2019 and our year-long focus on all things creative, the RainyDayMagazine folks piled into the car for a road trip to the Natick Mall to check out a JOANN kiosk.

Why would we drive almost 30 miles to visit a temporary “small booth offering goods and services” of an “American specialty retailer of crafts and fabrics with more than 850 locations”? Because we wanted to have see a GlowForge 3D laser etcher/engraver/cutter in the wild.

A 3D laser etcher/engraver/cutter is a laser printer that can “write” on anything…paper, metal, wood, cloth, etc. How is it 3D? Well, by varying the intensity and duration of the laser, one can control how deep the laser “writes” at any given X/Y point, so it is able to adjust the depth of the etch on the fly, and, if you wanted and depending on the material, cut clean through it.

Yes, there are YouTube videos showing how to make etchers out of old CD players and $200 rigs on Amazon and Ebay which can both etch and cut. Yawn. The big deal with GlowForge is that it is packaged as a unit and its process is simple enough that ANYONE do it, right out of the box and not out of a kit you have to build (or a collection of cobbled-together bits and pieces).

The fact that these machines are now showing up in mall kiosks means that they are ready for prime time, and THAT is a big deal as well.

GlowForge At The Mall 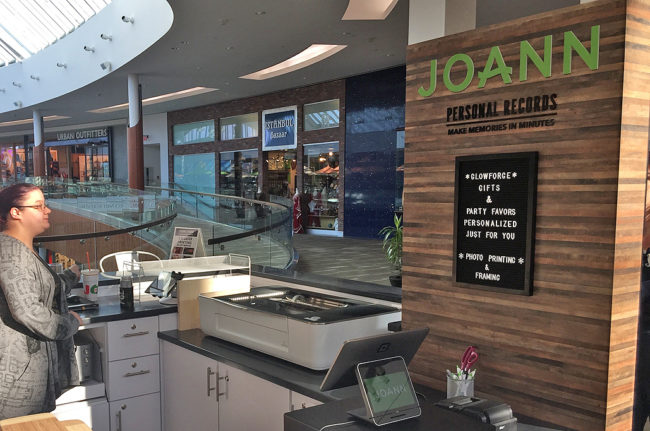 A GlowForge and a Dunkies – set for the day!

The JOANN operation is still getting its footing, but what is impressive is how quickly it all came together. The kiosk in the Natick Mall gets lots of foot traffic, and its size is perfect for what they are selling (personalized gifts, not GlowForges). It is set up similar to the places where one can get personalized baseball caps, etc. These Joann/GlowForge kiosks aren’t selling GlowForge supplies, but they probably will at the JOANN stores (JOANN is an investor in GlowForge).

JOANN’s business model of “3D laser printing for the masses” was not our reason for our “get in the car now or we’ll leave you at the office!” Urban Safari outing. We wanted a first-hand, up-close look at the GlowForge. 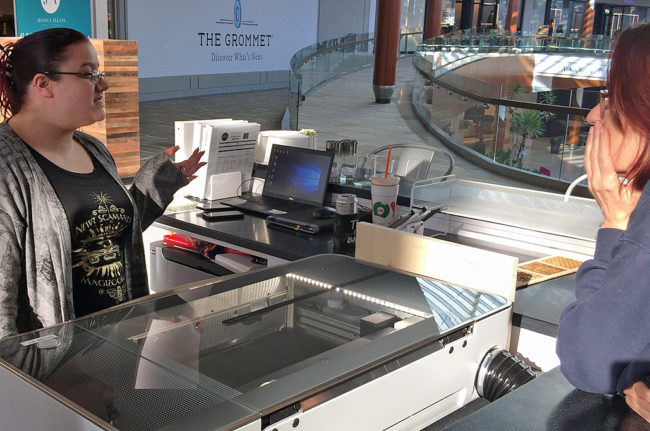 “Well, I COULD etch ‘antidisestablishmentarianism” for you, but it won’t fit on a coaster…”

The person we spoke with was very nice, knew how to run the unit, make the cuts, and answer basic questions about what it does. However, it is not a tech support “Genius Bar” for GlowForge nor is it suppose to be, so don’t expect them to be able to troubleshoot problems with your machine. 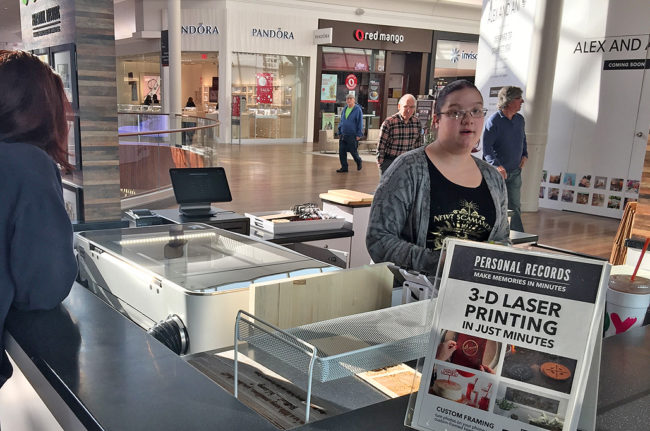 “No, we don’t etch cookies or cupcakes. They invented frosting for that.”

GlowForge has three models in its current line: Basic, Plus, Pro. The unit at the kiosk was the Plus. The Plus has better components and a more powerful laser for up to 20% faster printing (as compared to the Basic). The unit itself is about 38″ wide and 21″ deep. Not small, but it wouldn’t take over a room. 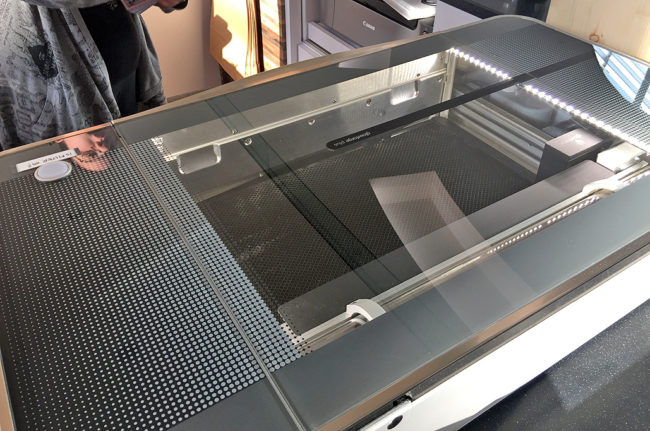 “Sir, I already told you: no, this is not a replicator from Star Trek.”

Machine noise is not much of an issue for this particular GlowForge, as it was masked by foot traffic and other typical mall noise, but what about the fumes from all that laser-ating? The exhaust piping goes down into the cabinet and presumably into…something. What or where we didn’t see and we didn’t ask, but probably should have! 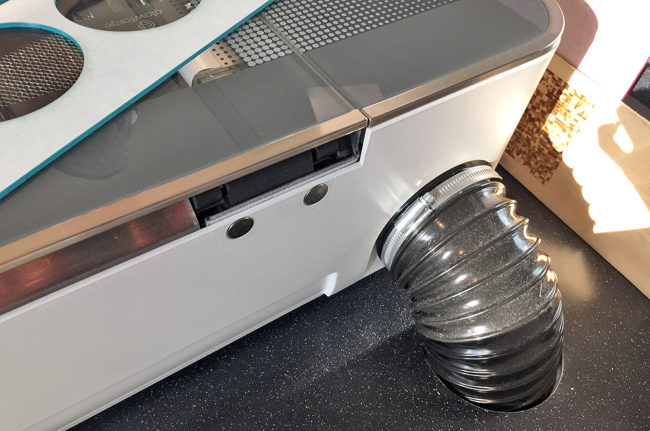 Don’t kid yourself: it’s a worm hole, plain and simple.

At this time, this kiosk (and probably all the others, too) are intentionally set up to do a limited set of cuts (etching blank cutting boards/slate/cork/acrylic coasters, and cutting out cake toppers and stirrers, etc., all of which they sell).

You can give them a flat design which they can image and use. You cannot send them a file, have them run it, and then pick up the final product in a few days. It doesn’t make sense for them to tie up a machine with a complicated etch or cut and charge the same amount of money as the simpler jobs. But seeing that laser-cut cake topper for a little girl’s 1st birthday, who cares if you can’t get the Mona Lisa etched onto your slate cheese board? 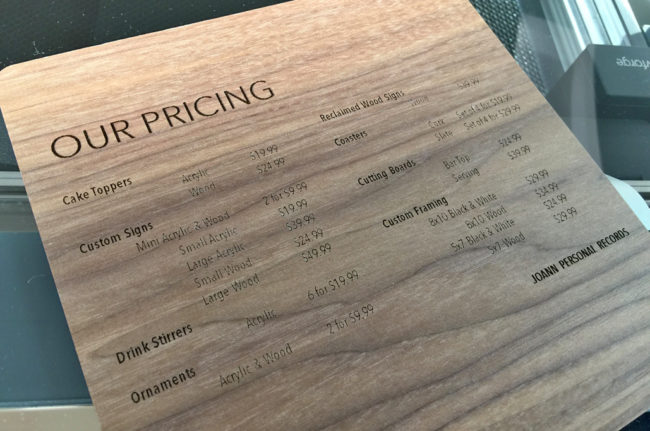 I wonder if they plan on etching olives…

We did not see the machine in action while we were there (the mall had just opened and the kiosk had no customers yet), but it was still nice to see the Plus machine in person. We were able to see its physical size, build quality, and to see the results of what the kiosk etches and the cuts look like. 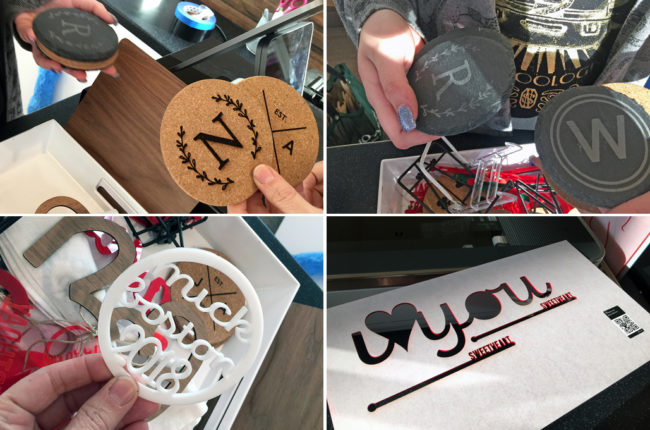 We took a look at all the samples available at the kiosk. We were particularly interested in the quality of the etches, cuts, and the materials. All in all, we were impressed: the cut edges were clean, sharp, and not easily produced any other way.

Cake with topper for the kids, cocktails with stirrers for the parents.

The etches were controlled, repeatable, and can create varying depths for very precise 3D sculpting on a variety of materials. We can see this used with great effect. The creative potentials are astounding. 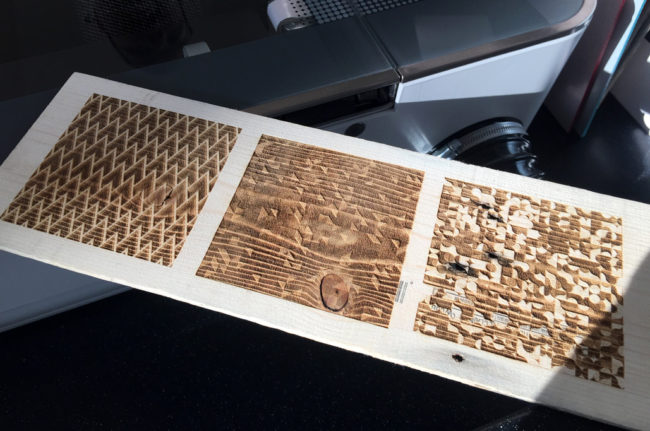 Plywood will never be the same.

This quick “tour” doesn’t even begin to scratch the surface of the capabilities and possibilities of the GlowForge. We are extremely excited to be able to see this machine first hand. 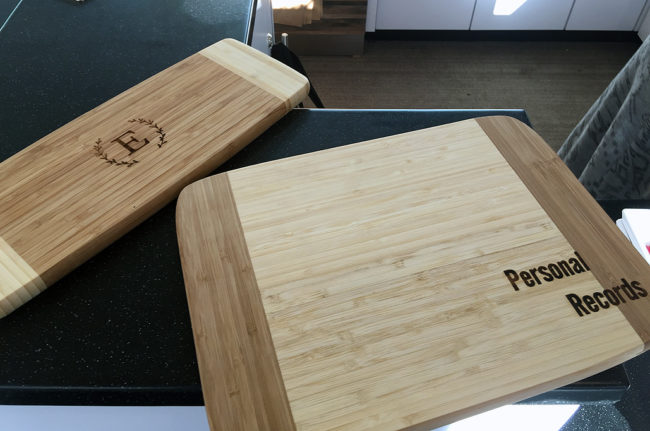 Giving the phrase “carved in stone” a run for its money.

We’ll have more on the GlowForge in 2019. Don’t let the tchotchke-ness of JOANN’s mall efforts fool you. The GlowForge may be a game-changer for the creative crowd much like the 128K Mac was for desktop publishing back in the day, and JOANN is absolutely brilliant to invest in GlowForge!