The Winter of 2015 and the Spring of 2016 was definitely not typical. After a colossal amount of snow in the previous winter, this past winter was NOTHING! There were a few snow storms, but hardly anyone noticed.

Spring was another story entirely.

April started off with a freak snow storm. The storm really messed up a lot of the plants which were tricked into budding early by the warmer-than-usual temperatures in March. 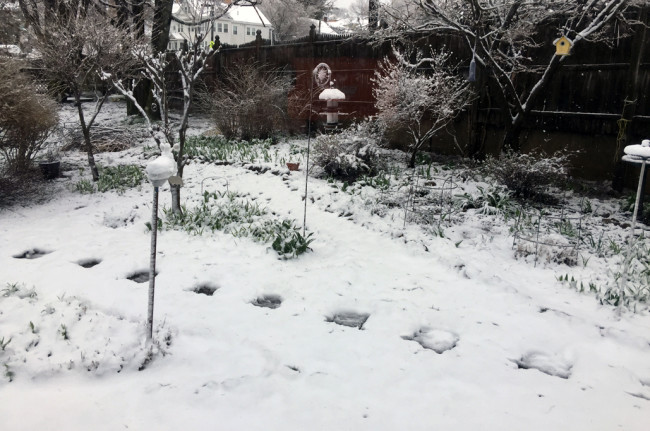 Plants which budded early suffered quite a bit of damage, but a few days of 70º temp kicked things into overdrive in the RainyDayGarden. Of course, after two days of 70º weather, all of a sudden 58º was “too cold” for us to be outside without an extra layer 🙂 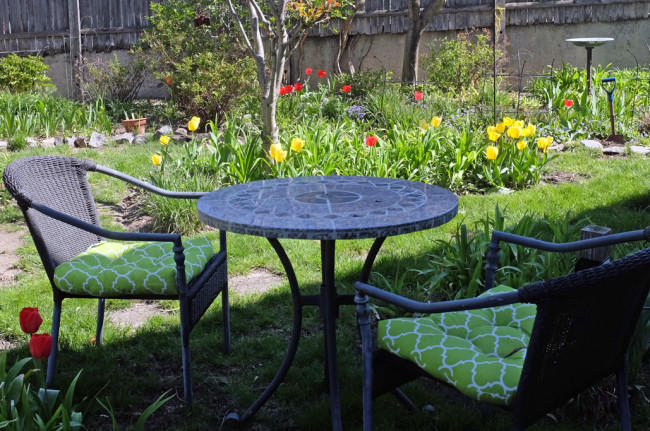 Still, during a break between the rain, we “braved” it to practice using the water droplets as a lens. We did manage to get one interesting shot of a droplet before having to tuck tail and run back inside!!!

When the temperature changed we took advantage of the bright overcast to get in some practice shooting closeups with a point-n-shoot (Fujifilm X100S, handheld, full auto): tulip, fritillaria, bloodroot, poet’s daffodil, yellow daffodil. 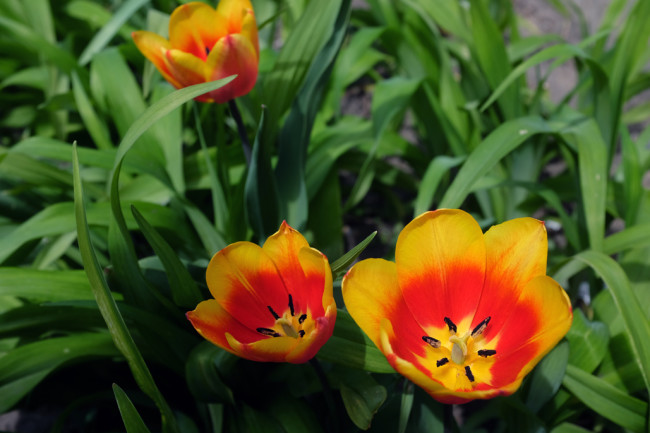 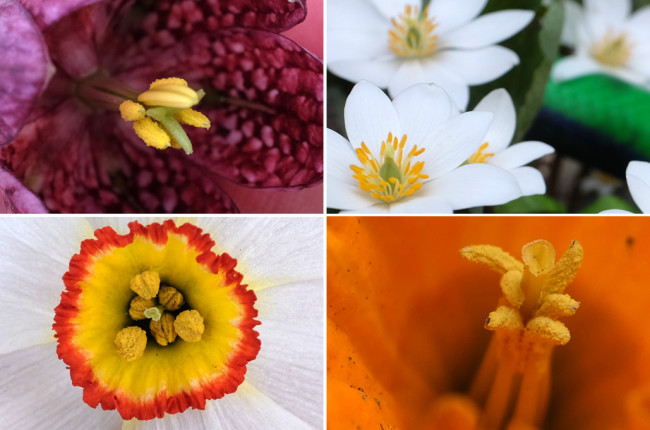 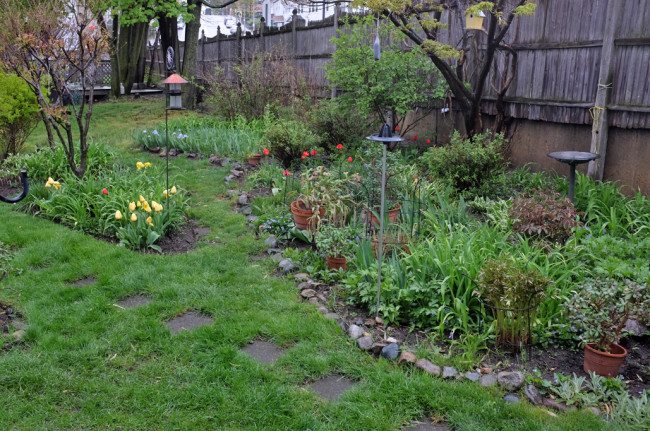 The light blue Irises loved all the rain!!! They started opening up in late April, but the rain in early May really extended their blooms.

A few days of sun and more blooms in the RainyDayGarden started to come out: Yellow Iris, Lily Of The Valley, Solomon’s Seal. 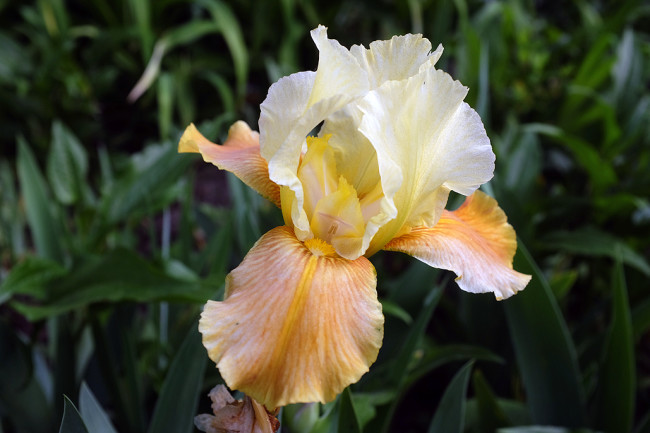 Of course, there is nothing like a little rain then to get the blooms really going. Here are all the purple things that flowered in May: Lilacs, Alliums, Siberian Irises, Clematis, Violets. 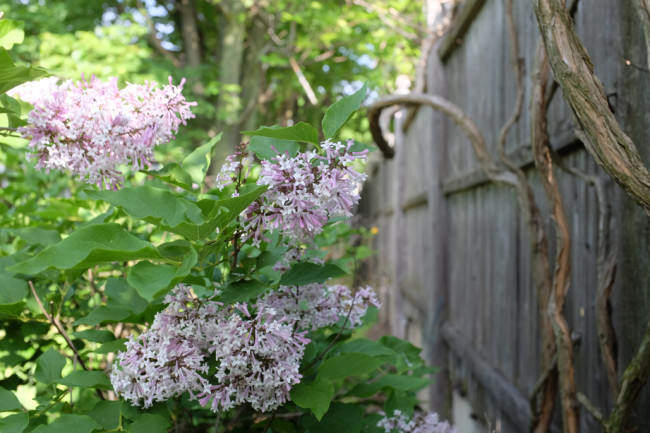 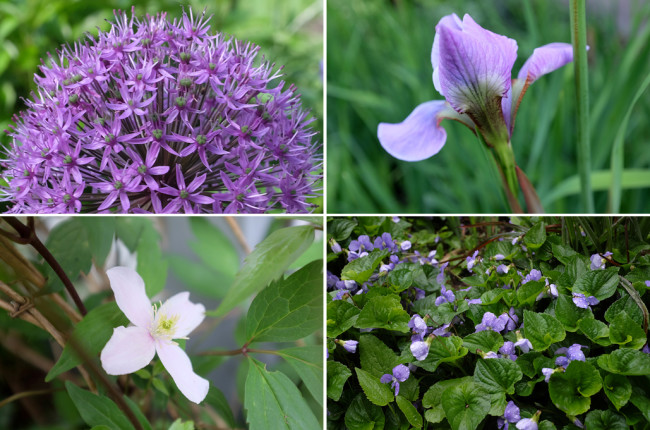 It hit 93º in the garden on May 23rd, hot enough to convince the Columbines to open up. Summer was here early! 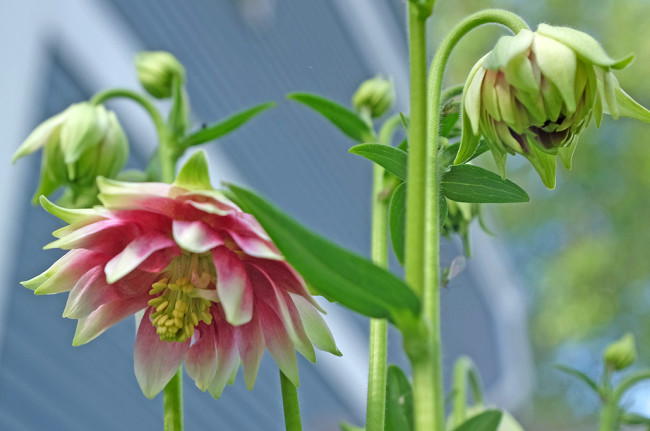 The Siberian Irises and Japanese Dogwood started flowering in late May, and the white Peony blooms are a nice way to finish up the month. 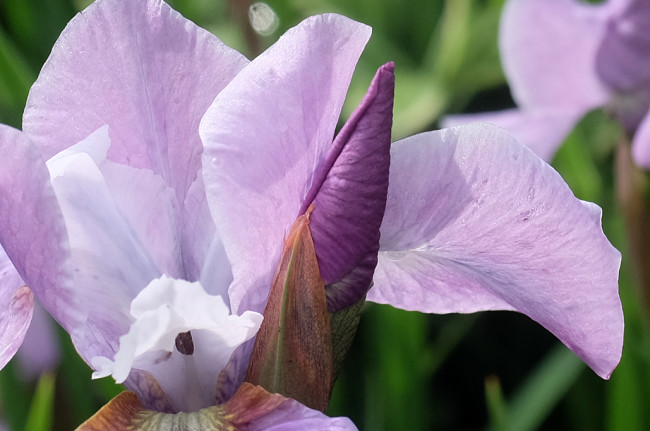 The hot weather pushed the purple Spiderworts into full-bloom mode, but the cooler temp let them hang around a bit longer. May saw a large patch of them right behind the clump of zebra grass. 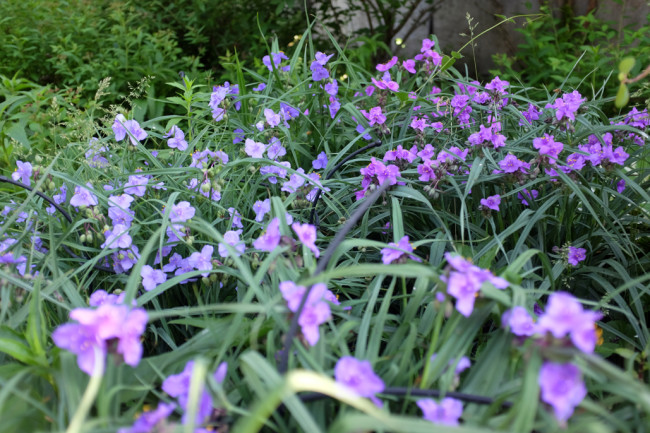 June had the garden in full growth mode. Fewer blooms than previous years, but the greenery was abundant. 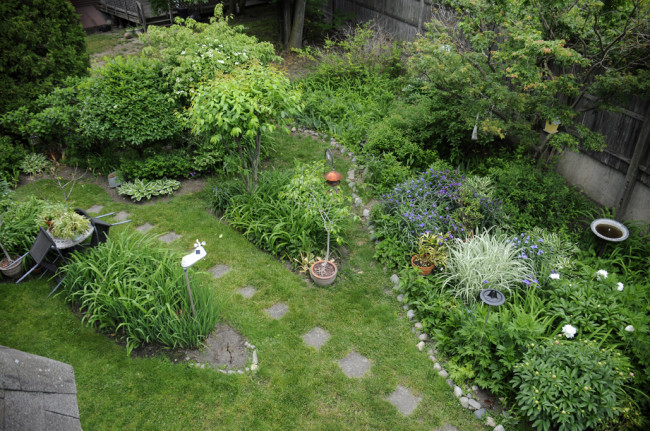 One of the best time of the year in the RainyDayGarden is when the pink peonies are in bloom during the month of June. They came in big and fast…with just a hint of roses, but can fill a room with the fragrance if you let it! A no-work perennial that is hard to beat. 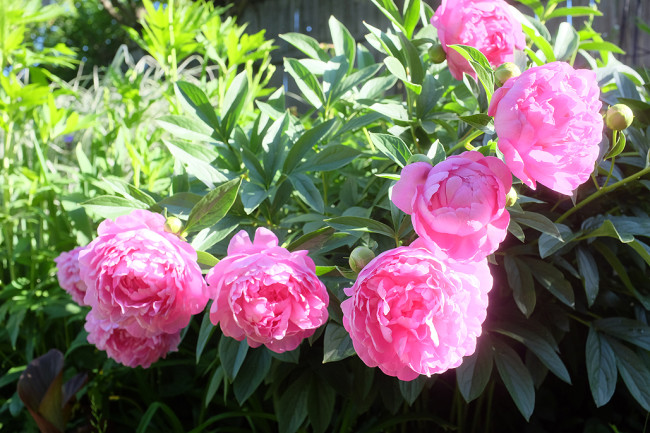 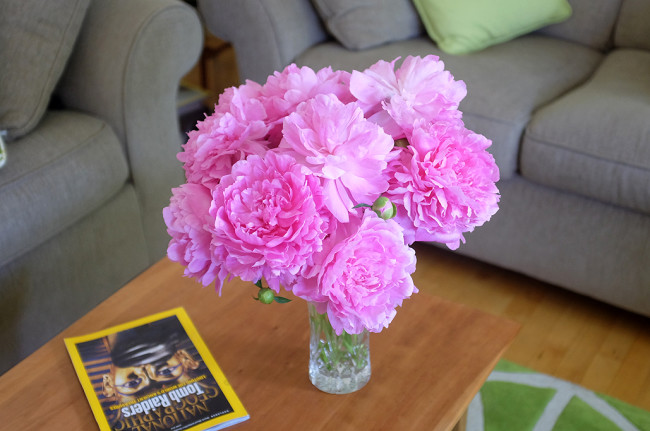 The most prolific plant in the RainyDayGarden is the Day Lily. The orange ones known as the “ditch lily” (because they are so easy to grow that they will literally grow in a ditch) are the most prolific, and create a nice vertical aspect in the garden. 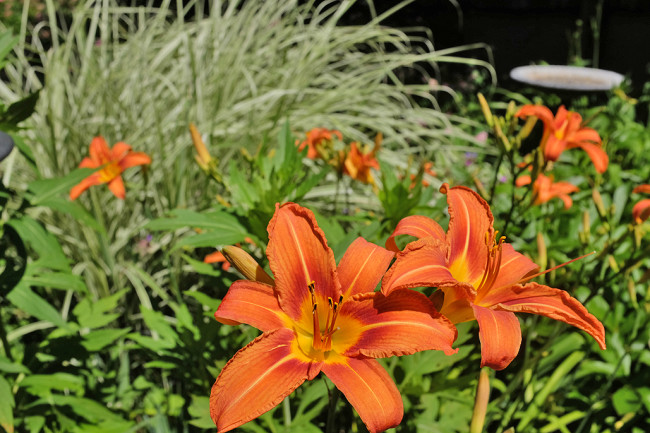 We planted a few of these lilies over twenty years ago and today there are hundreds in the garden. They don’t require much water, absolutely zero care, and will bloom continuously for a month! Not bad for a plant you can find in a ditch…

The double-bloom clematis was in full bloom in June…and when we say it is blooming, we mean like this! 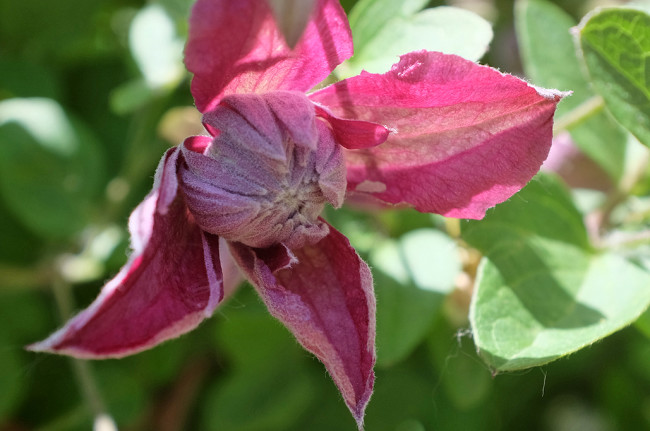 Once well established, a clematis vine will pretty much take care of itself. This one has been coming back for over 15 years. The odd thing is we have not been able to propagate it anywhere else in the garden!

There has been a small herb garden in the RainyDayGarden for a while. Most of the herbs there are tended to with the help of the “interns,” and this year was no exception. Parsley, lavender, garlic chives, oregano, thyme, marjoram: it’s rather impressive how many herbs you can grow in a 2-foot square space. 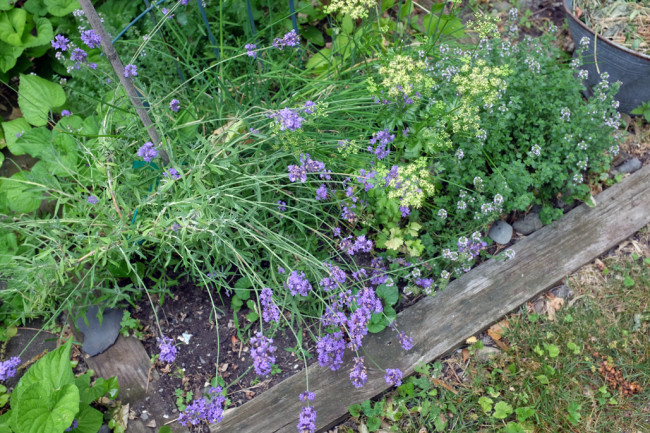 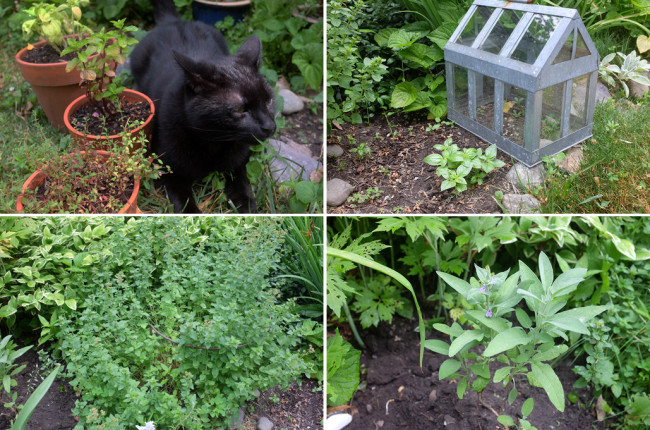 We have started propagating the herbs which survive the winters to other parts of the garden (sage, oregano, lavender, camomile). It is kind of nice to have plants which are pleasant to look at AND can be used for cooking!!!

To wrap up, we give you “The life of a Cone Flower,” or, as one of our editors calls them, Roger Rabbit flowers…