The 90º heat in Boston finally broke yesterday and it did it in dramatic fashion. Around 4PM in the afteroon, clouds started to form overhead. In the span of less than thirty minutes, the sky got dark, the wind picked up, and flashes of lightning streaked across the sky. It had a kind of  "wrath of God" feel to it all. Which immediately led to the thought..."Cool! Thunderclouds! Wonder if we'll need a polarizer?" 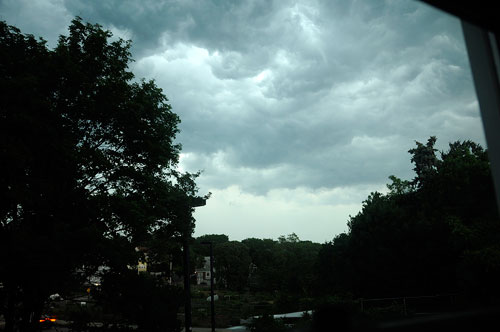 We had considered setting things up to see if we could capture some of the lightning strikes, but decided it was probably prudent to not bring too much gear out as the situation could get really wet really fast. Shooting with the D90/18-200mm with VR active, we took a series of shots of the thunder clouds as they swirled in and upoverhead. Most of these shots were taken hand-held at 1/15s with the aperture at f3.5. Playing with the polarizer did not make the clouds appear any more dramatic, so we stopped futzing with it and concentrated on finding interesting patterns.

It was when a giant streak of lightning cracked overhead that we realized that we were standing next to the tallest tree around. Remembering our high school Earth Science, we decided it was probably best to pack up and head indoors. We watched the rest of the show from the comfort of a properly grounded dwelling.

By 6PM, the show was over. The rain stopped, the sky cleared, and all was well again. All in all, it was quite an impressive display…kind of like having our very own 3D IMAX movie playing right outside, only a lot wetter.