When we fly, we always try to get a window seat. We have never been to the Grand Canyon, but when we flew out to L.A. this past January, we had a window seat. The view from the plane was pretty spectacular. Since it was Winter, snow was everywhere. It made for some interesting shots. 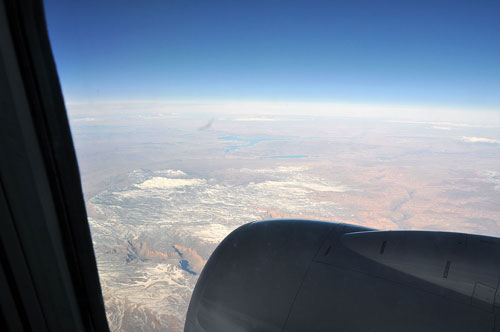 Looking down from 40,000 feet, it was cool to see the erosion and ridges sharply defined by the snow. We remembered  Orographic lift from high school Earth Science and expected to see snow cover on the western side of the ridge. However, we saw snow on the eastern side, which confused us a little (we need to have the interns do some research). Coming into LAX, we saw snow on the mountains, but it was on the western side only. Now THAT snow was probably due to orographic lift effect…

Our recent trip to LA gave us a 7:15 AM departure out of LAX for the flight back to Boston. We were up at 4:30 AM to make sure that we would get to LAX with plenty of time to clear security. The only good thing about the early departure (other than landing in Boston ahead of rush hour) was that we once again had the opportunity to look out the window. 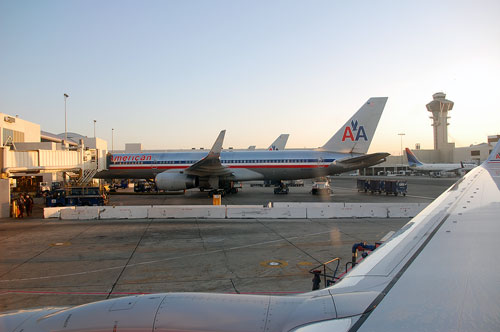 What we saw this time were blue ridge mountains. Not the Blue Ridge Mountains, but mountains with blue ridges. They were amazing at this time of the day. The sun had already risen by the time we took off, and there were some interesting shadows. Not all of the haze had disappeared so the peaks faded nicely in the back. The view was so nice that it lulled us off to sleep soon after takeoff. 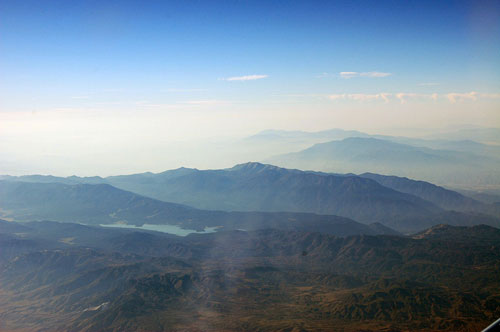 We did learn one thing on this trip. We wouldn’t pick a seat in the exit row again. Exit row seats don’t recline, for safety reasons. While we could fall asleep in just about any position, it was really uncomfortable to fall asleep sitting straight up as we tended to fall forward and snap ourselves awake. Given a choice between leg room and a view, we would take the view every time. However, next time we will either pick a seat in back of the exit row or try to stay awake a little longer 🙂