Unlike the Winter of 2015, last Winter was relatively mild snow-wise for Boston. There were a few storms which snarled things up for a few days, but nothing like that of two Winters ago. There were a few days in March which were warm enough for the day lilies, irises, and tulips to start sending up shoots, only to be stopped in their tracks with one last cold snap.

The RainyDayGarden was cleared out of its dead plants in the Fall, but we left some of the flower stalks for the birds as there were still some seeds on the cones. When the snow fell, the effect was an unexpectedly pleasant “white bloom.” 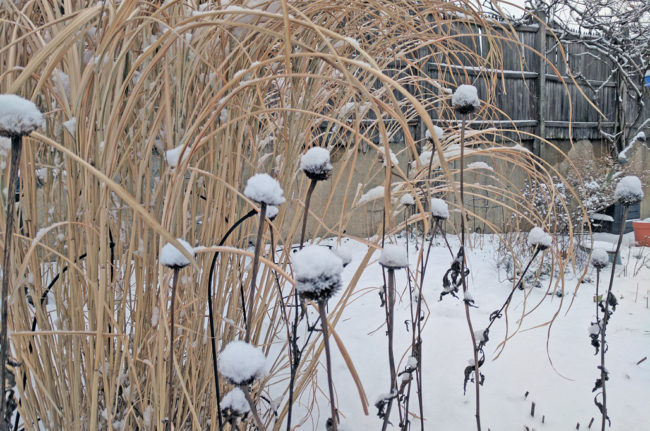 The snow also capped off a few other items in the garden, one of which was the blue crackled-glass bird feeder from our friends at Gardener’s Supply Company. This feeder is a favorite with our avian visitors, as they can sit inside and be sheltered while they eat. 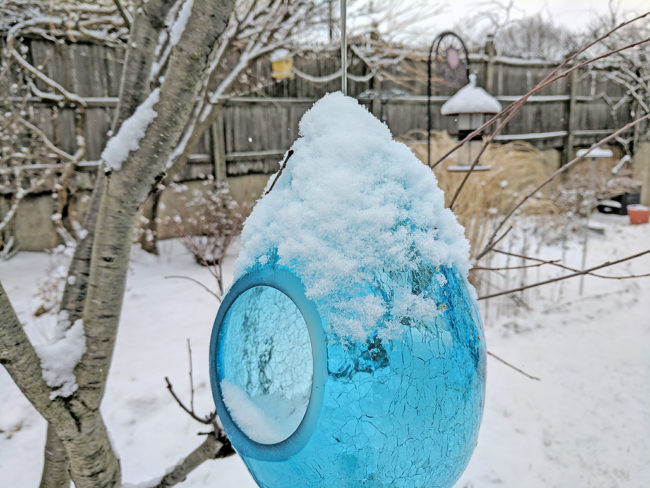 By mid-March signs of Spring were everywhere. Day lily shoots poked through the mulch, as did the tulips. A cold snap later in the month did some damage to the tips of the day lilies, but did not slow down the tulips one bit. 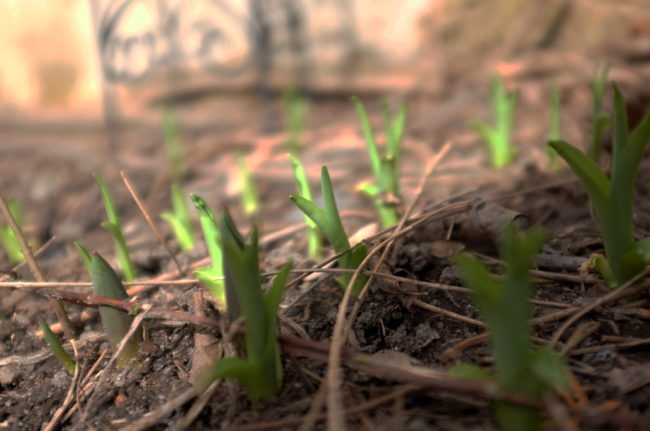 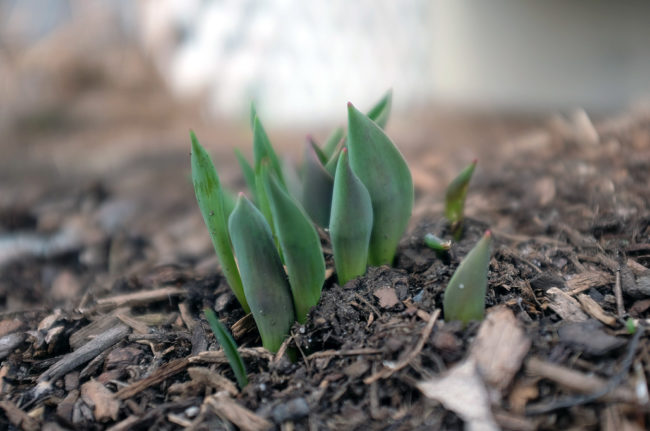 The shift into April was accompanied by a blanket of early bloomers such as tiny irises, crocuses, and grape hyacinths, all of which were especially vigorous this Spring. 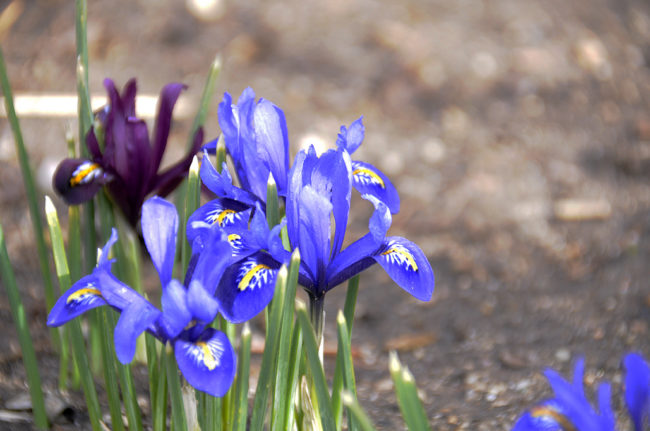 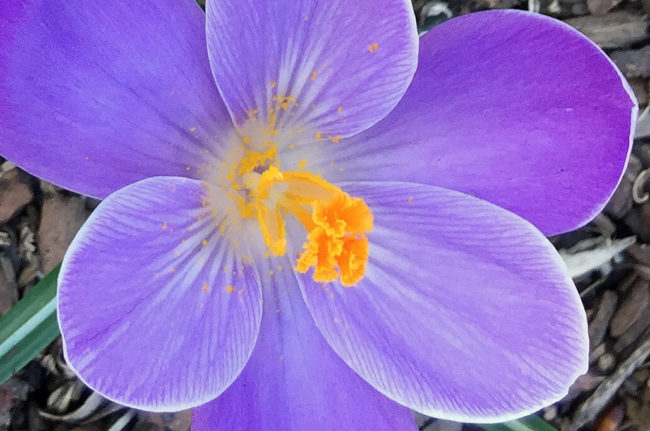 The photo below shows that the grape hyacinths are “on the march” from the central cluster to claim more ground. Some of them will be mowed over with the next grass cutting, but the trend is clear…their will cannot be thwarted! 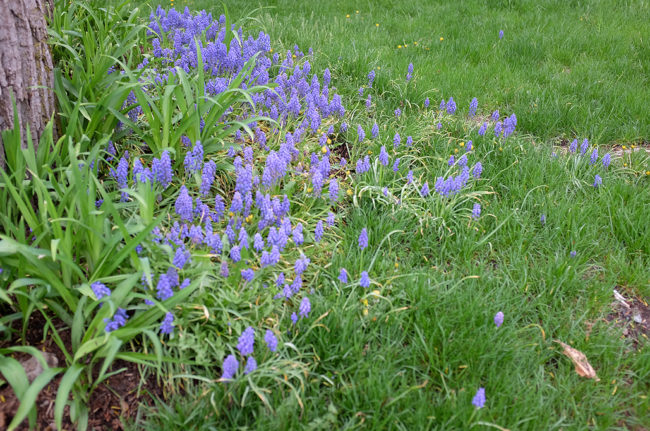 We usually put feed out for the birds right up to the start of Spring as their natural food sources are now available. One reason is we just like seeing them in the RainyDayGarden. Another is that nest-building and tending to the young is pretty energy-intensive. A little extra help in the city for our feathered friend is probably not going to upset the balance of nature. 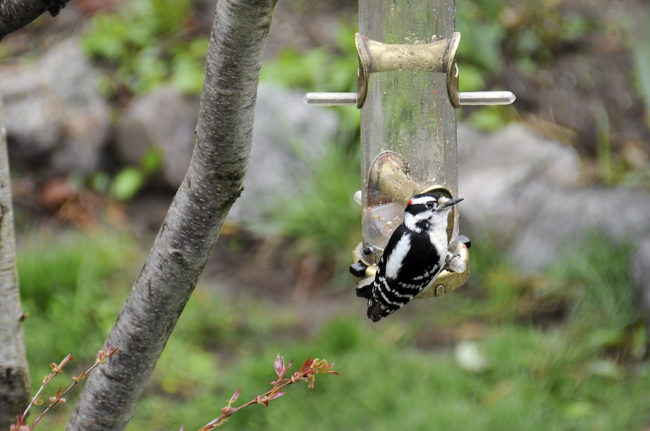 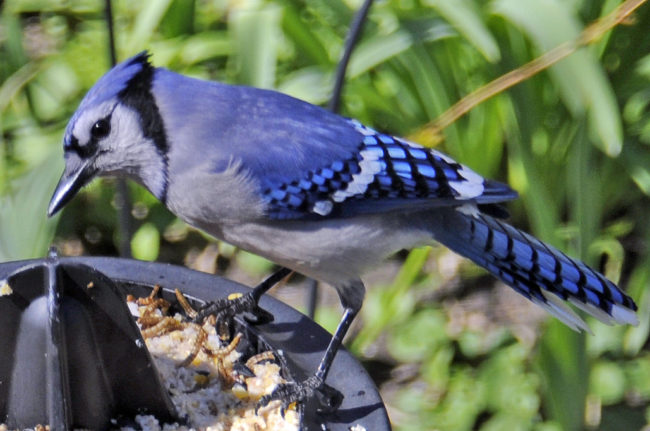 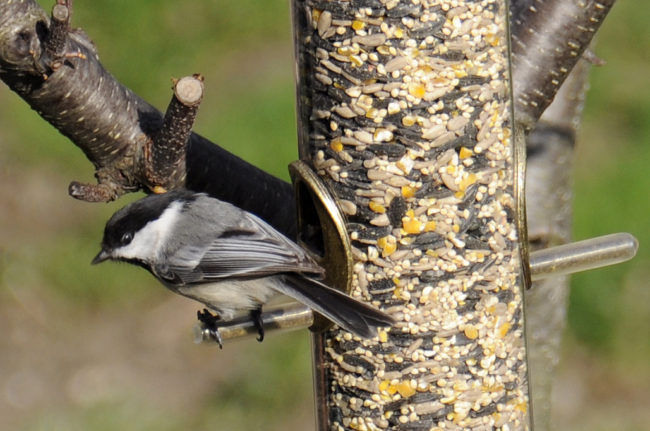 The one surprise this Spring was that we caught the Chickadees checking out the hanging bird houses. Those bird houses have been up for quite a few years and we have never had any birds nest in time. Maybe this is the year!!!

Although not our intention, the squirrels also were pretty well fed until we finally caught on that the glass feeder really WASN’T out of their reach!!! 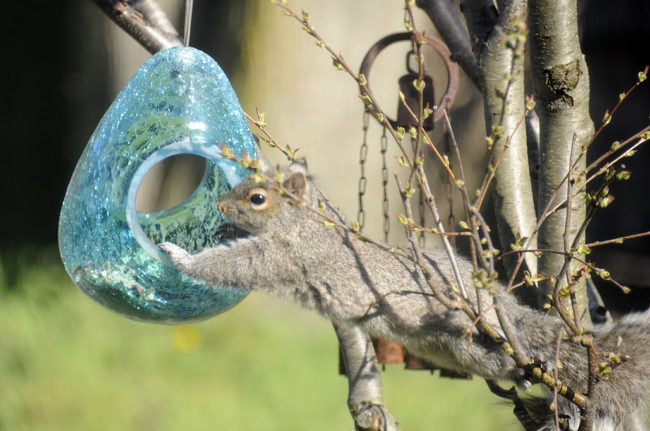 We stopped putting feed out for the birds by May as Spring was in high gear and food was plentiful everywhere for everyone. 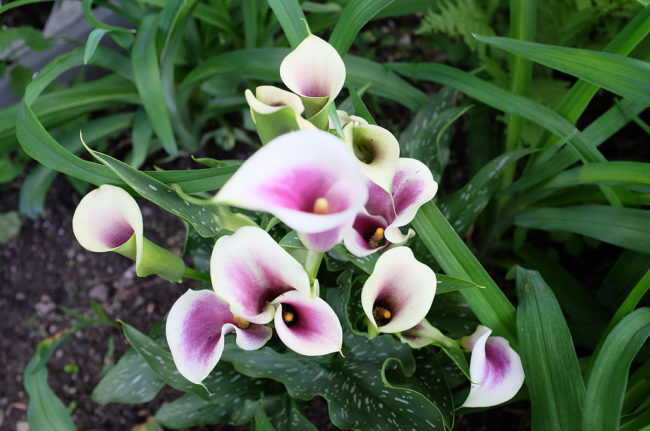 New to the RainyDayGarden are the Calla Lilies and Columbines. We are interested to see if they return next year. 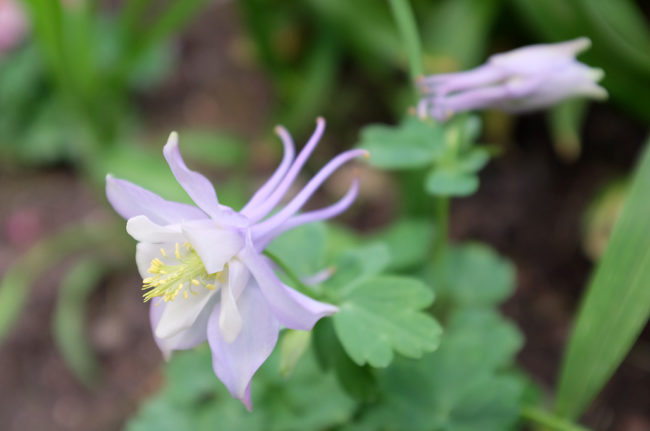 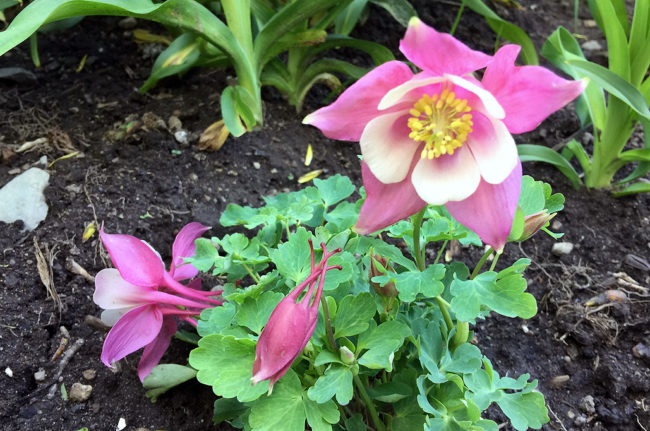 Especially spectacular this May was the lilac bush. It has been years since the bush “exploded” in blooms the way it did this year. We had not done anything different either by trimming or fertilizing, so it must have been due to the weather conditions. Whatever it was, we like it!!! 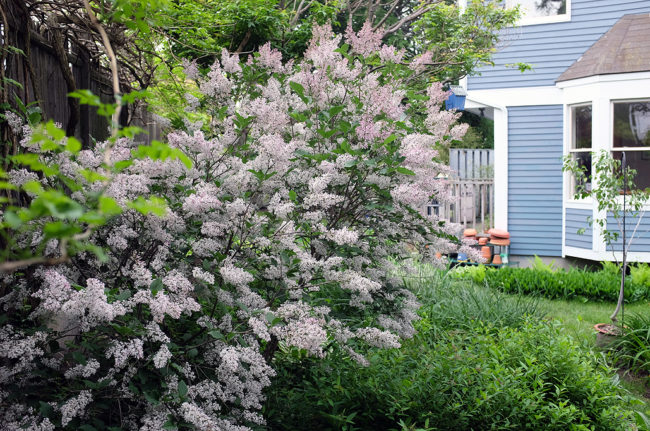 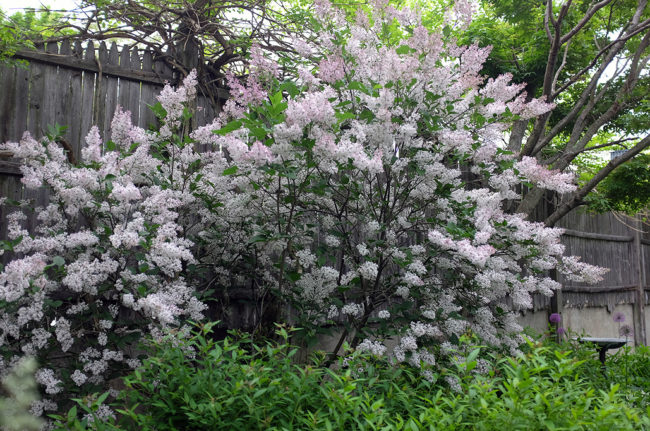 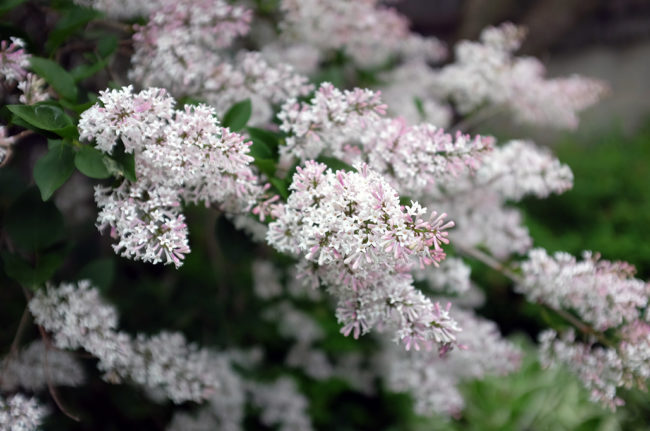 Also putting on a show this year were the irises. The iris section of the RainyDayGarden took a few years to reestablish itself after the plants were moved, but they seem to have sorted themselves out and are now happy with the location. We introduced cone flowers into the mix and it is unclear if one will crowd out the other, but we’ll keep an eye on things to make sure things don’t get out of hand. 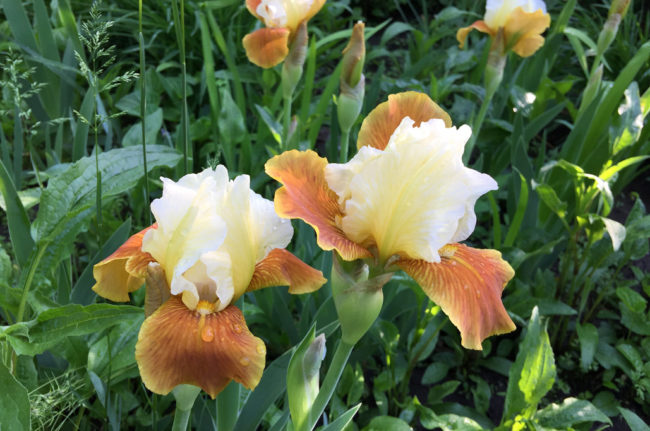 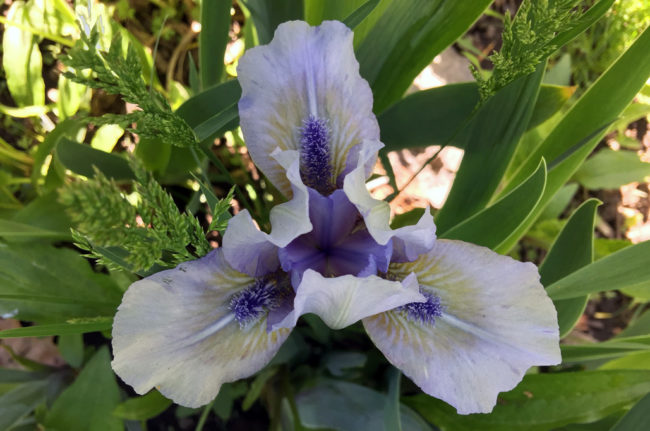 In summary, Spring 2017 saw the introduction of Calla Lilies and Columbines into the garden. Very little work was done in expanding things as the garden is big enough. It may make sense to shape, trim back, and otherwise thin some of the faster growers so they don’t take over. We’ll evaluate in the Fall and see.