Last week we posted a write-up of the Brando iPhone4 microscope lens. It generated a bit of email asking if the setup is at all practical out "in the field." It was a fair question, as all of the sample images provided in the article were taken inside under controlled conditions. This weekend was overcast, in the mid-60ºs, had a light breeze. Those were fairly reasonable conditions for seeing out how the iPhone4 microscope would perform InTheWild. 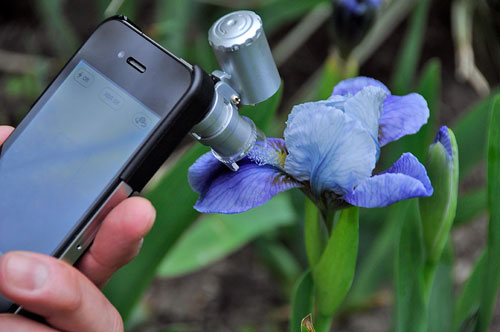 The advantage of using the iPhone4 camera outside during the day is that there is plenty of light. However, having TOO much light can overwhelm the camera’s sensor. The day being bright but overcast was a huge benefit as the diffused light lit the plants without creating hard edges and harsh shadows. Another benefit of a cloudy day was that it was easier to see the images on the phone’s display, both for focusing and composition.

After shooting for just a few minutes, we realized that the shallow depth of field meant a steady hand is critical to getting a sharp image. Being able to tap the screen to choose the area of focus is helpful. However, we wish we had voice-commands for zoom and taking the shot as having to tap the screen often messes up the focus. Uh, while we are at it…why aren’t user-programmable voice-commands already a part of the iOS??? Still, with a little bit of trial-and-error, we were able to get quite a few usable images. Below is a gallery of images we took using the camera on the iPhone4: each pair of images show a standard camera shot (left) and a macro shot taken with the Brando lens (right). Click on any of the images for a larger version.

The other thing one can do easily with the iPhone microscope is to take videos. While other digital microscopes can take videos, the iPhone adds the ability to upload the clip directly to the web almost as fast as one can shoot. Imagine that you are deep in the jungles of Borneo (the section of the forest that, amazingly, has AT&T cell coverage) and you come upon a brand new species of ant which…Yes, we just saw the movie Medicine Man. OK…we didn’t discover a new species of ants, but we did find a few of thembusily making new mounds in our front walkway. They agreed that we could film them working as long as we didn’t disturb their work.

We took the video, uploaded the clip to YouTube, all in a matter of minutes. The YouTube version of the video is lower in resolution than the original. Still, the quality is surprisingly good. The ease with which all this could be done is just astounding.

We think that for less than $20, the Brando lens is probably the most amazing accessory one can buy for the iPhone4. What we LOVE to see is a version for the iPad2… hint, hint.