Astronomy may be the most accessible of the scientific disciplines to the general public. All that is really needed is a clear night, a comfortable chair, and a pair of binoculars. Of course, that does not mean a little gear wouldn't add to the enjoyment of looking up at the night sky. Every year those who have been bitten by the astronomy bug gather at the Northeast Astronomy Forum (NEAF) and Telescope Show to look at gear, share stories, and to generally have a great time.

NEAF and the Telescope Show is presented by the Rockland Astronomy Club of Suffern NY, and is the biggest telescope show in the world. We decided to drive down from Boston to see it for ourselves. The two-day event featured world-renowned speakers, workshops, special events, and over 140 vendors showing everything from screws to observatory-grade telescopes. This year was the show's 20th anniversary, and according to the show's organizer the turnout was the largest ever. 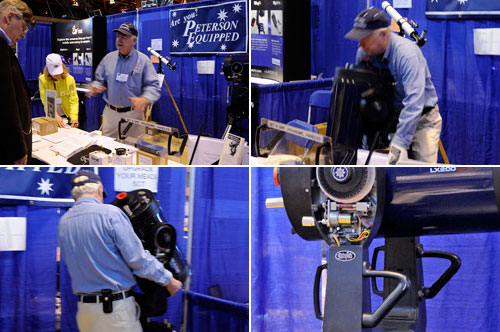 The first thing we did at NEAF was to drop by and say “Hi” to the folks we have worked with online but have never actually met. We “met” Pete of Peterson Engineering when we installed his mounting assistant on our Meade LX200 scope. We wanted to drop by the Peterson Engineering booth to introduce ourselves. When we arrived Pete Petersonwas demonstrating the benefits of his Get-A-Grip scope handles. We have always found it awkward to carry and maneuver our 10″ scope onto the tripod. Most of the time, we need two people to do it safely. It was amazing to see him lift and mount the 12″ scope all by himself. We think we have found another RainyDayScience project to add to the list 🙂

Our next stop was the HoTech USA booth. David Ho was on hand to demonstrate the laser collimator he designed for collimating SCTs. His setup is portable, can be used indoors, and can be done by one person. We are quite excited about this collimator and hope to take a detail look at one soon for RainyDayScience.

The last on our “must meet” list were the folks at Questar. It was great to finally meet Jim Reichert and others who have been so helpful with our inquiries in the past. Also, it was a pleasure to be able to look through their various scopes, to see the quality of the gear, and to feel the craftsmanship first hand. 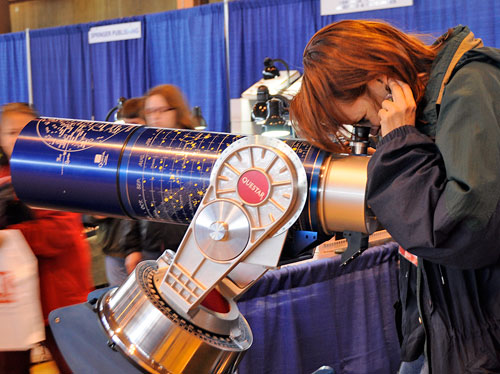 Questar has taken its Classic 7″ and redesigned it using materials, technologies, and experience from its aerospace and surveillance satellite work. All previous stainless steel components have been replaced with titanium. The scope can now use 2″ eyepieces as well as the standard 1.25″ Brandons. The result is a scope that is four pounds lighter, with amazing optics, and beautifully decorated with their trademark star chart on the barrel and moon map on the dew cap.

While the 7″ titanium scope is a thing of beauty and a technical masterpiece, it is Questar’s 3.5″ telescope that made them famous. To celebrate the 50th anniversary of the founding of the company, Questar created a special numbered-version of the iconic scope to mark the event. The 50th Anniversary model will be limited to just 250 units. Each will have special optics, enhanced coatings, and other refinements. As with all Questar scopes, each will be hand-crafted and individually tested to ensure that it meets the stated specs. We got a first-hand look at one of 50th Anniversary unit at the show and it is as drool-worthy as one would expect.

The adage “bigger is better” may not always apply, but in the case of telescopes, with other things being equal, it is definitely true. The bigger the telescope, the more light can be gathered, and the brighter the final image. A bigger telescope requires a correspondingly larger mount/tripod to keep it steady. The result can be quite an imposing instrument. A few companies at the show have scopes (PlaneWave, Meade) and mounts (Mathis Instruments, Astro Physics) for researchers and enthusiasts with seriously DEEP pockets. These are not the kind of scopes one would bring into the house after a night of looking at the stars, but rather the kind one builds a house around. 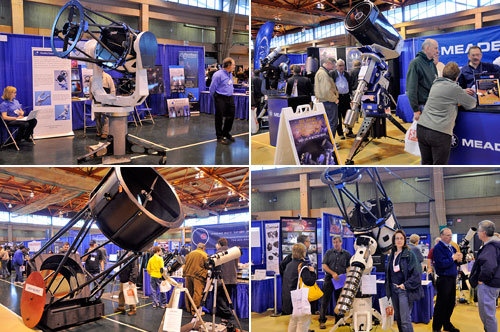 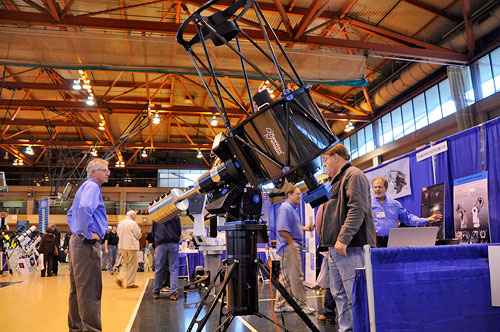 At the other end of the spectrum are gadgets which help astrophotographers get the “big picture.” Vixen Optics had an intriquing gadget in their booth which stopped a lot of traffic. The device looked like the body of a small point-n-shoot camera, but is actually a pocket-size motorized drive, called the Polarie, that can support a DSLR. This unit is currently only available in Japan. We hope it makes it to the States soon!

For those who would like to get a quick horizon-to-horizon view of a location, the AllSkyCam from Moonglow Technologies is an interesting solution. The camera gives a 190º view of the sky. Special software can remap the video to give a normal panoramic image. This tool is useful for those who need to check on sky conditions at remote locations in order to decide if a trip would be worth the effort. 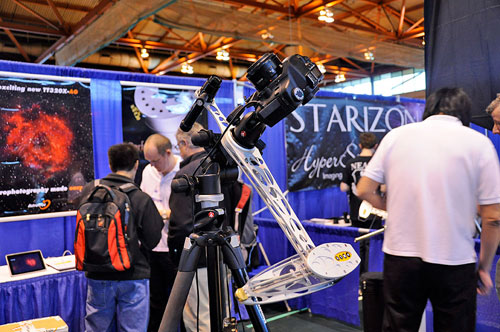 Another interesting device for the DSLR astrophotographer is the TT320X-AG from AstroTrac. It is a compact, portable, DSLR mount/tracker which looks simple to set up and easy to use. We were especially impressed with the quality of the build and the kind of images we saw taken with the setup. This is something we have to find out more about.

Folks who attend the NEAF & Telescope Show truly love the hobby. So it was easy to meet and chat with people. We had a chance to speak with Jerry Lodriguss of AstroPix. Jerry retired from his job as a staff sports photographer at the Philadelphia Inquirer a few years ago and turned his photographic skills toward the heavens. The results are four books on astrophotography. In astronomy, light is important, but too much of it can be a problem (as many of us who live in the city know). We had a nice conversation with William Hill of Omega Optical and he explained how their filters can help. As Omega Optical supplied all of the filters for NASA’s Mars Exploration Rover, we think they know what they are talking about 🙂 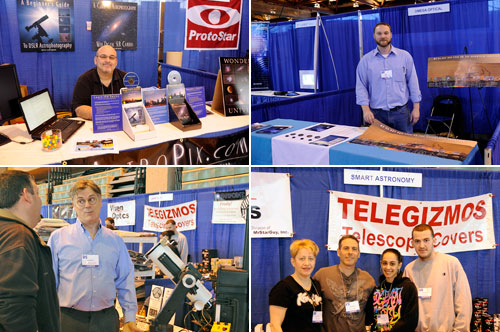 While being able to ask questions and get answers is great, sometimes it is fun to just listen in. Even though astronomy is a pretty technical hobby, there are still myths and lores abound. We won’t repeat the discussion between these two, but suffice to say that there was some skepticism involved. Of the many folks we met at the show, our favorite was Victor Quarto and his crew at SmartAstronomy. We had a very pleasant conversation with Victor regarding the press coverage of the show over the years. Yes, Victor…you are welcome 🙂 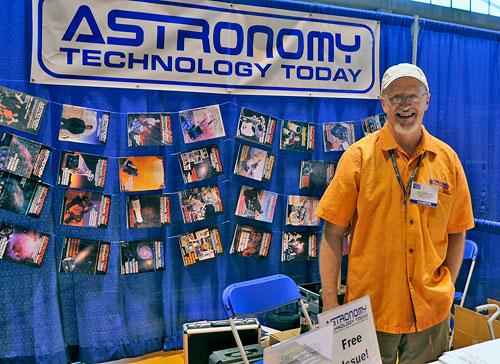 We had a great time at NEAF and will definitely be back. Even though we started this article with the statement that all one needs to enjoy time under the stars is a clear sky and a comfortable chair (still true), for those who want to get a closer look at the heavens there is a lot of gear available to help them do just that (definitely true). For readers wondering how to keep up with the latest in astro gear, Gary Parkerson and his team at Astronomy Technology Today magazine are here to help. Just a word of caution, reading ATT may cause afflictions such as “gear creep” and “aperture fever,” both of which are easily cured by either getting a second job or winning the lottery. Clear skies!