The  weather was kooky this Spring. With the temperature almost hitting 90º in March and then cooling and raining much of April (and most of May), we weren’t sure when was the right time to swap out the Blizzaks: it was Memorial Day Weekend and the Winter tires were still on the Boxster. As the chances of 40º nights are pretty low, given that the earth still revolves around the sun and that whole axis thing, we thought we should have the interns throw on the Summer tires. We got them the Tire Totes

to make it clean and easy to haul out the tires from storage, how much easier could we make it?

We have been doing this seasonal swapping of the tires ever since we got the Boxster. Having the right tires for both Summers and Winters gives the car better handling characteristics. This was especially true during Winter times: we got up hills slick with ice and snow when even SUVs had problems. Also, taking the tires off twice a year gives us an opportunity to inspect the brake pads, rotors, and other parts of the car for wear.

A case in point: the “Brake Wear” light came on during the Winter. Since we had replaced the pads last Fall, we knew the problem could not have been the pads themselves. The issue was most likely with one of the sensors. And while annoying as it may be to see the warning light come on every time we drove the car, we knew that any needed repair could wait until we swapped the tires.

is nothing more than just a long wire. When the wire is intact, it forms a closed circuit. The wire is attached to the brake pads in such a way that when the pads are worn down to a certain level, the wire is also worn away and the circuit is broken. Once the the car’s system detects that the circuit has been broken, it activates the “Brake Wear” light. The problem is if there is a break anywhere along the length of the wire, the car’s detection system will not know the difference and will also turn on the warning light. 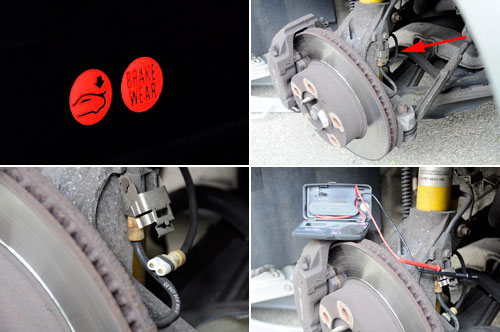 Since the weather cooperated and the car’s state inspection was coming up, we put in a new sensor this weekend. Finding the problem was a simple matter of using a multi-meter to perform a “continuity test” on each of the brake sensors. The four brake pad sensors connect to the car’s electrical system just behind each rotor. The plug can be reached if the car is up on a lift, but getting at it is much easier with the wheel removed. Each of the plugs are secured by a little metal latch. Lifting the latch was a little tricky, but once freed, pulling the plug out was easy. It did not take us long to find the broken sensor (driver side front) and replacing it was just a matter of removing the old one and plugging in a new one. Those who check their brake pads often don’t really even need to bother with plugging the sensor into pads. Many just leave the sensor connected to the car, but tie them out of the way so that the system does not activate the warning light. We like to have them plugged into the pads more as a backup.

In order to make changing the tires easier, we had invested in a low-profile heavy-duty

car jack many many years ago. The investment has paid for itself

several times over. The jack’s low-profile makes it easy to get it under the car and its wide stance makes it stable under load. The long handle offers a lot of leverage and just a few pumps are all that is needed to lift the wheels off the ground. Also, the heavy-duty construction means it will probably be the last jack we will ever buy.

Another great tool to have around is a portable air pump

. It is handy for adjusting the tires’ pressure to the proper level through out the year. Properly inflated tires will do more than just extend their wear, it will significantly improve the car’s gas mileage. With gas prices these days, the savings will quickly pay for the cost the pump. We have had our JNC AIR Jump-N-Carry

since 2006. It is an excellent jump-starter/air compressor combo unit which has gotten the folks here going on more than one cold Winter morning. 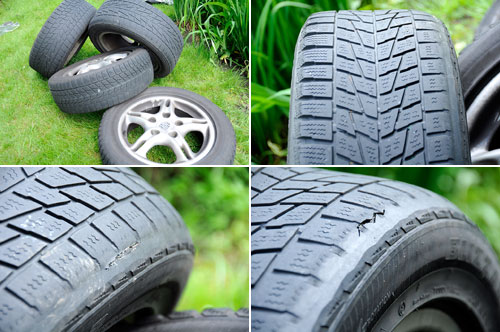 As for tire-wear, it appears that after six season, the Blizzaks have finally reached the end of their useful life. For performance reasons, Boxsters are set up with a negative camber (top of the tires tilts to inside more). This results in the inside of the tires wearing faster than the outside. We might have been able to extended them another year if we had dismounted them and switched them left for right so they could wear on the opposite side last Winter. Since the tires were six years old, another problem was tire-rot. While not severe, the rubber on the tires was showing signs of drying out and we knew that it was probably their last Winter. 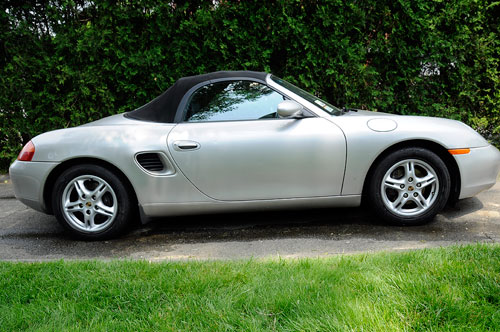 With the Summer tires on and all of the warning lights off, the Boxster is now officially ready for Summer…and the annual State Inspection. Hmmm, probably should have the interns give the flashers, rear lights, and some other things a quick check before going in for the test. [Permalink] –