Everything  has a lifespan…even a online comment board. For those who own a Porsche Boxster, THE gathering place for the past decade has been Porsche Pete’s Boxster Board. When we first got our Boxster, PPBB was the place where we learned all about its quirks, eccentricities, and how to “manage” them. Over time, PPBB became a place where we would go visit even when we didn’t have any problems with our Boxster or have any Porsche-related news to contribute. We would stop by just to see what others have been up to…much like our “local” in town. 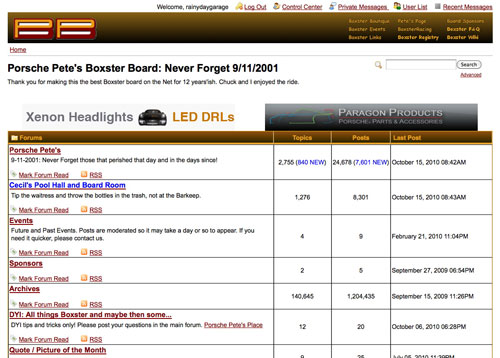 After today, PPBB will go dark. The reasons are many, but ultimately it came down to the people. Most of the “old-timers” have heard all of the common problems, discussed in-depth all of the possible solutions, and have become bored with repeating the same things to the “newbies.” The focus of the discussions started to drift to politics, the economy, and other issues of the day. At first, the discussions were tolerated as long as they had SOME connection, however tenuous, to the Boxster or even just Porsche. Unfortunately, the discussions have wandered too far off course and attempts to reign things back in have turned into an exercise of “herding cats.” In the end, the board administrators decided PPBB has ran it course and it was time to turn out the lights. We can’t say we blame them. They (Rob, Cecil) have worked tirelessly to pick up where Chuck (original creator of PPBB) left off. For that, we would like to say “Thanks!!!”

We will definitely miss the chatter. Anyway, we were happy to have “met” many of the frequent board members. We may not have always agreed with everyone’s politics, but the generosity of these knowledgeable Boxster “techies”, especially MarkW, Skyler, MFocke, Trygve, and Pedro, have made it much easier (and much less expensive) to keep our 10 year old Boxster in running shape.

There is already talk from Pedro that he may pick up the torch and get a similar board going…we hope so. It will be nice to have another place to hang where the talk is intelligent and hopefully, for a while, it’ll be just about Boxsters.