We  wanted to see the Fourth of July fireworks on the Esplanade, but the thought of fighting 800,000 people for a spot along the Charles River was not at all appealing. Just considering the idea required way more effort than we were willing to muster up. However, opportunities to take photos of fireworks are hard to pass up. What we needed was to find an “undiscovered” spot that was close enough to the city, accessible by car, and preferablely with a view of Boston skyline to serve as a backdrop for the show. 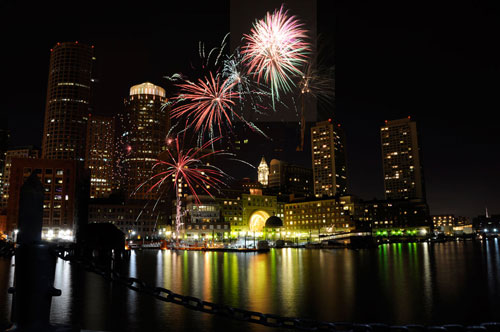 After a bit of discussion, we decided to head down to the HarborWalk at Fan Pier. The one problem with the location is the buildings. It meant we would only see fireworks which would be high in the sky. However, that vantage point has a great view of Rowes Wharf from across the water, the Custom House clock tower would be visible in the distance, and the fireworks would look spectacular climbing out from behind the buildings. Best of all, there would be no crowds.

Photographing fireworks is actually quite easy provided one has a sturdy tripod and a camera capable of shooting in manual mode. For this outing, we decided on the Nikon D90 and the 18-200mm zoom lens. We thought about taking the Nikon P7000, but decided against it. Should we run into any problems, we would have probably had a better chance of solving it in the dark if it was something we already knew well. We chose the Nikkor 18-200mm zoom so we could get wide shots as well as get in tight without having to change lenses. 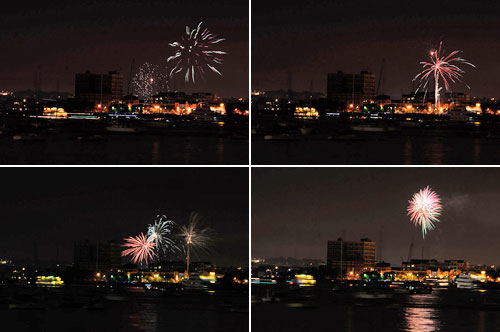 We have had some experience photographing fireworks using film, but this was our first time shooting it with a DSLR. We had some ideas of what settings to use, but we had no idea if they were valid for the equipment. While waiting for the Boston fireworks to start, we noticed we could see the smaller fireworks displays along the horizon. We realized this was a good opportunity to experiment and “dial in” some of the settings. After about ten minutes of trial-and-error, we settled on the following:

Final tip: Bring a flashlight. A lot of the labels of the physical buttons on the camera (should you need to fudz with them) are impossible to read at night. 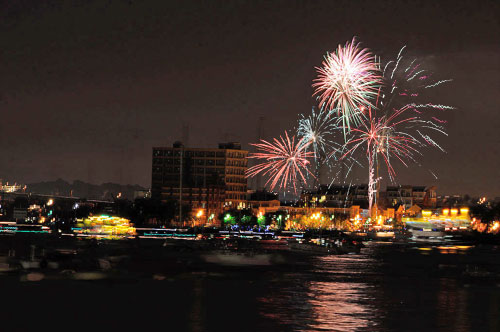 Shots of single explosions were helpful in figuring out what settings were best to use, but they don’t make for very dramatic photos. One solution is to combine the various singular firework explosions into a more festive composite image. The steps to blend the various images is deceptively simple (use the “Lighter Color” blending option) assuming that all the photos were taken with the camera on a tripod from exactly the same spot.

If the fireworks from image above look strikingly similar to those in the Rowes Wharf shot it is because they are the same. We photoshopped in the fireworks to this Rowes Wharf image we took last night. As it turns out, the reason why there wasn’t anyone there was because the HarborWalk was a terrible spot to watch the fireworks 🙂 One could hear all of the explosions and every once in a while catch a glimpse of a streak of color between the buildings. Unfortunately, the buildings were just too high and completely blocked the view. Oh well, we’ll have to try to find a better “undiscovered” spot next year.

NOTE: CBS apparently also did not have a good view of the fireworks and have followed our lead in faking their photos as well. BTW, we are not sure how many folks CBS had put on their effort, but all we had was a guy with a Mac.