The first in the series of Urban Safari got quite a nice response and a lot of excellent suggestions on other locations. One of those suggestions was the Boston Nature Center (BNC) in Mattapan. As with the Franklin Park Zoo, this wildlife sanctuary is just a few miles from the RainyDayMagazine office. While we are frequent visitos to the BNC in the Spring and the Fall, we have never been there during the Winter months. 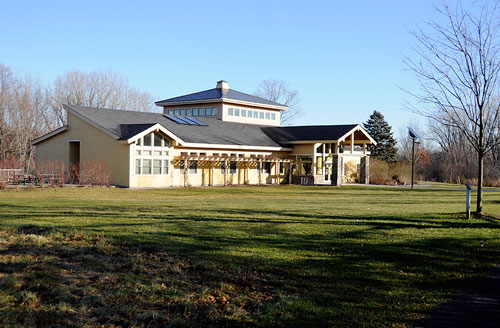 With the weather being unseasonably warm this January, it felt more like a day in late Fall than the middle of Winter on our visit. We arrived fairly early. The Nature Center building was not yet open and the grounds were very quiet. This urban sanctuary was built on the grounds of the former Boston State Hospital. There are still bits of its State Hospital past visible on the paths if one knows where to look, but the once-neglected property has been reclaimed and and transformed into a welcoming 64-acre habitat for native wildlife.

Besides being a wildlife sanctuary, the BNC is also a regional proving ground for green design and sustainability experimentations. The main building’s location and orientation on the site were chosen to maximize the availability of natural daylight and, thus, limit the building’s need for artificial lighting and winter heating. The building’s orientation also facilitates the use of solar technologies to harness the sun’s energy for water heating and electricity generation. It is the first municipal green building in Boston and utilizes the following technologies to achieve its energy needs:

The miles of trails and boardwalks traverse meadows and wetlands where wildlife abounds, including coyotes, pheasants, and many species of migratory birds. We came upon  a flock of turkeys feeding a few yards away from the path. One of the turkeys was actually perched on a tree branch about ten feet off the ground. An imposing figure, a wild turkey can stand four feet tall, with a large, bulky body covered with bronzy, iridescent feathers. The tom (male) has a reddish blue head, and a hairlike “beard” protruding from the breast. The female, by comparison, is smaller and duller than the male. In the winter, turkeys form separate flocks comprised of males and females, which do not break up until spring.

The Boston Nature Center offers public programs year-round. The BNC is easy to get toby car or via public transportation. The trails are open every day from dawn to dusk. It is a great retreat for anyone looking to go on an urban safari any time of the week.