Everyone knows we love the iPad, but we have also been hoping that a serious contender would come forth to challenge the iPad's dominance in the tablet space. Android tablet makers have been treading water for almost a year. Products from HP, Samsung, and other have pretty much been DOA as sales of non-iPad tablets have been laughable. Don't even get us started on their market penetration strategies. However, yesterday's announcement from Amazon was a game changer. 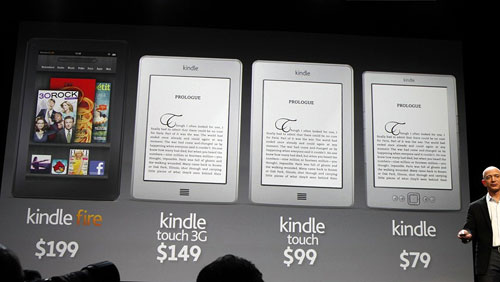 Amazon introduced four new Kindles: $79 keyboard-less Kindle, $99 Touch, $149 Touch 3G, $199 Fire. These new Kindles are quickly approaching what the perfect eReader should be: great display, light weight, connected, long battery life. While the new black and white tablets are cool, it is the color Kindle Fire that has us all hot and bothered.

The Fire has almost all of the features we listed for the $100 tablet. Now if Amazon can find a way to cut its price in half, Apple will really have something to worry about. Still, as with the iPad, we liked what we saw so much that we pre-ordered the Kindle Fire immediately. For one thing, we want to really understand the user experience of reading books and magazines on the Fire. With Adobe making it impossible to publish inexpensively on the iPad, maybe we can do better on the Kindle platform!

is going to be one hot (like you didn’t see that pun coming) item this holiday season. If you don’t get in line

now, you will likely have to wait unit next March. Don’t say we didn’t warn you.

However, we are excited not just because of the new hardware. We are excited because, finally, someone has a tablet strategy that will be able to compete with Apple. Amazon is not going to go head-to-head with Apple on the hardware front, but will try to out flank them from the content side.

Listening to Amazon’s announcement, it quickly became clear that it was more than about tablets. Don’t get us wrong, the Touch and Fire Kindle tablets Amazon introduced are totally awesome. However, the new Kindles are really Trojan Horses. By offering a line of inexpensive tablets coupled with tightly intergrated services for them, Amazon wants to change how people interact with their media (books, videos, etc…). Specifically, not just by shifting us gracefully from the computer to the Kindle for web browsing, movie watching, and emailing, but by off-loading the storage of all that content from a local disk to cloud storage. Amazon’s longer-term goal is to convince us to move EVERYTHING to Amazon’s Cloud. Any computer-intensive operation will be done on Amazon’s server farms and the result sent back to the user’s screen (monitor, cellphone, tablet, etc…).

Amazon’s cloud-based strategy is a glimpse into how everyone will working in ten years, whether with Amazon’s EC2, Apple’s iCloud, or something not yet developed. To accomplish that, Amazon will need 1) great tablets, and 2) to focus on the 80% of things people do on tablets: web surfing, email, movie watching. Amazon will provide lots of content (books, music, video) and offer inexpensive tablets for consuming the content they provide. However, the real battle to be waged will be for the storage all our “stuff.” As the saying goes, the one with the most stuff wins.

Update (Oct 5, 2011): Leak suggests Amazon Kindle Fire may surpass iPad pre-sales…there were already more than 254,000 pre-orders for the tablet at the time of the leak.