We  here at RainyDayMagazine are fascinated by dinosaurs. While decendents of dinosaurs are all around us (birds, reptiles, etc…) none of them are of the size of the ones which roamed the Earth eons ago. Dinosaurs bones have been discovered all around the world. Petroglyphs made by American Indians may have depicted these creatures. Records of “dragon” bones found in Wucheng Sichuan date as far back as 2,000 years ago. As to the term “dinosaur” or “terrible lizard,” it was the British scientist Richard Owen who coined it in 1842. What scientists know about these creatures is constantly being revised as new discoveries and technologies are brought to bear on the study of these fossils. CT scans, computer simulations, and biomechanically accurate modeling have enabled paleontologists to form and test new theories about these mysterious giants. 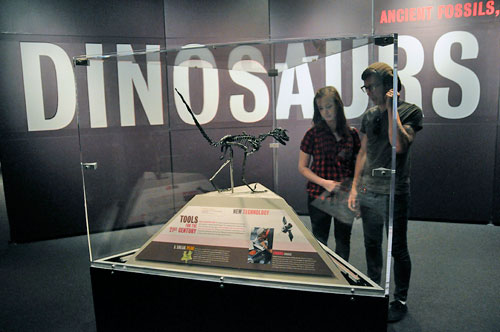 This weekend, the Museum Of Science (MOS) unveiled a new temporary exhibit, Dinosaurs: Ancient Fossils, New Discoveries, that showcases some of these latest findings. “People of all ages will be captivated as they walk back millions of years to discover how science and technology are revolutionizing what we know about dinosaurs, how they looked, and how they behaved,” says Paul Fontaine, MOS vice president of education.” This amazing exhibit combines major fossil finds, casts, and computer animations with striking life-size models — and even a mechanized T. Rex— to reveal a dynamic new vision of dinosaurs and the scientists investigating them.”

The anchor of the exhibit is the full-size cast of a Tyrannosaurus Rex. Being able to get up close to the model really gives one a sense of scale of the T. Rex. The T. Rex skeleton, while quite a bit larger than an ostrich, has a remarkable similarity to it in both form and structure. It is by studying both the similarities and differences that enable scientists to get a better understanding of how it may have moved, hunted, and lived.

Surrounded by three projection screens is an amazing 60-foot-long metallic re-creation of an Apatosaurus skeleton. The screen shows an animation of the internal skeleton and how bones, muscles, and skin map onto the underlying framework to visualize how the animal may have looked in real life and how it probably moved its long neck. The mapping was done using computer modeling based on data from the biomechanical and physiological branches of science. This approach has led to a more realistic rendering of the animal and a better understanding of how it may have interacted with its environment. 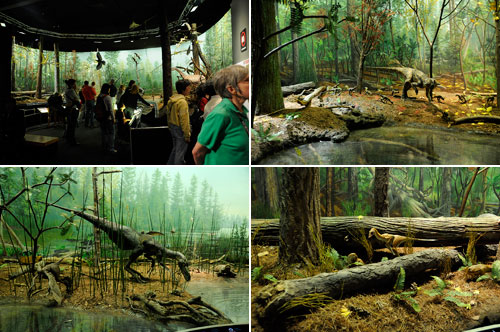 One of the most incredible parts of the exhibit for us was the 700-sq-foot walk-throughdiorama. This model is curved so visitors feel immersed in the scene. The diorama depicts a scene from a Mesozoic forest in China. The scene is a scientifically accurate re-creation using life-size models of over 35 species of dinosaurs, reptiles, early birds, and mammals. This is one of the most detailed models of a prehistoric environment ever attempted.

Another cool exhibit which should not be missed is the mechanized model shows how a T. Rex probably moved. The movement is based on computer analysis of the joints coupled with biomechanical data from the analysis of movements of large animals. We have a short video of it here. 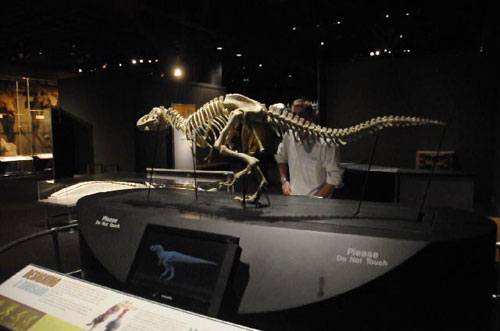 This special exhibit will be at the MOS from June 5th through August 21st, 2011. The exhibit was developed and presented by the American Museum of Natural History (AMNH).