Now  that a Bald Eagle in Boston is no longer news, how about seeing a Snowy Owls on Plum Island? A Snowy Owl sighting is somewhat more likely than glimpsing a Bald Eagle in the city, but it still requires some effort. Our friends Candy and Andy invited us to join them on a trek out to Plum Island to see the Snowy Owls, which have come south in search of some, uh, snacks. 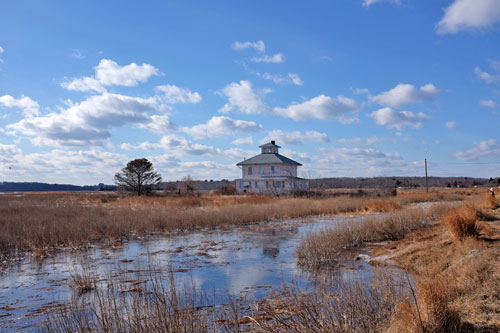 The day was brisk, but we were well-layered and prepared for the cold/wind. Still, with the temperatures in the low teens, the hand-warmers that Candy passed out saved the day! We managed to spot three of the birds at different locations, but they were too far out for a decent photo…at least with the gear we had. The closest shot was of one on the roof of an abandoned house a few hundred yards away.

Angled Spotting Scope, which at least gave us a good view of him. The Vanguard Endeavor scope was paired with the ABEO 243CV

carbon fiber tripod. The combo was exactly what we needed for the task. The fluid head panned and tilted quickly and smoothly. Setup was quick and getting things into focus was fast and easy. Too bad we couldn’t show the images of the owls as seen through the scope. They were certainly a lot crisper than the photos taken with the 18-300mm. Andy, shooting with the new Nikkor 80-400mm f/4.5-5.6G ED VR AF-S

, was able to get in a bit closer and a lot sharper. 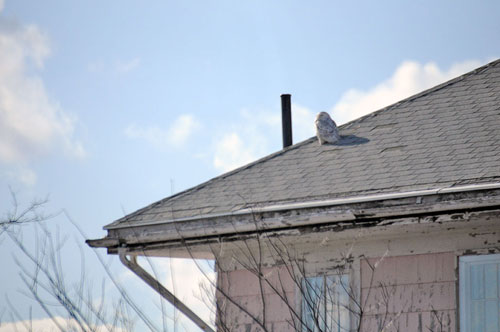 We made stops at several other locations along Plum Island to see if we could find ones not so far away. However, luck was not with us that day. All of the Snowy Owls we spotted were at quite a distance. The frigid temperature and biting wind were not encouraging us to hike any further than a few hundred yards from the car. 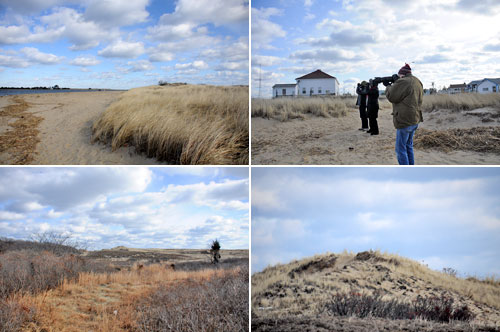 It was a really good thing we brought along the Vanguard scope and the sturdy tripod. With the Endeavor 65A, we were able to scan the area and zoom in for a clearer look. In all, we spotted two more on the beach; one on the top of a sand dune and another on the marsh side. But like the one at the abandoned house, neither of the ones on the dunes were close enough for a decent photograph. 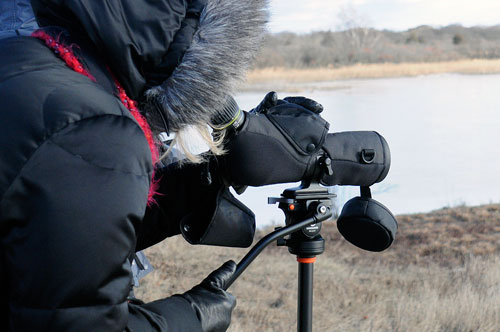 While our main goal was to see Snowy Owls, Plum Island is awesome regardless of whatever wildlife we happen to come across. The marshes, dunes, and boardwalks are scenic any time of the year and very relaxing to visit. Of course, when the temperature is in the teens, the area is a bit more serene. Still, we ran into more than a dozen folks out hiking and enjoying what the area had to offer. 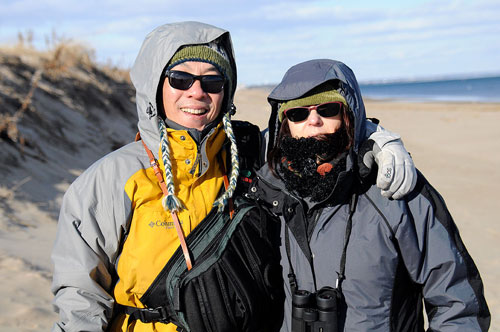 After the beach, we headed to Newburyport and the Lower Merrimack River to see if we would have better luck seeing some eagles. Candy said there is a spot where they had seen over a dozen eagles last year during one outing. Again no eagle joy, but it was a really beautiful place to discover.

Even though we didn’t get any good shots of the Snowy Owl or eagles, we did get a shot of a few ducks landing in an ice-filled marsh 🙂 We will be back to this spot in February when the hardcore folks gather for the Merrimack River Eagle Festival.