When  we took a FirstLook at the amazing DraganFlyer quadcopter back in 2005, we knew these devices would morph from hobbyist toys to something much, much, more. The pace of change in remote-controlled (RC) helicopters have been head spinning, specifically because of the interest in autonomous aerial drones. Universities such as UPenn have done a lot of research on computer-assisted flying of quadcopters. A lot of the work has been focused on controlling and flying the quadcopters with a precision not thought possible by human operators. 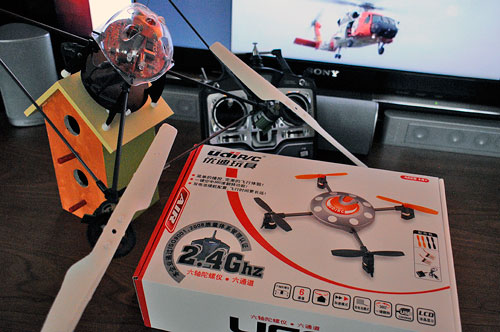 High end quadcopters can be costly. Our DraganFlyer retailed for over $1000 back in 2005. However, as expected, the cost for these RC units have dropped dramatically. Last month, a few readers pinged and told us about a little gem from Brando which is available for only $50! Granted, it may not be as capable as the DraganFlyer, but at that price, we knew we had to take a look. 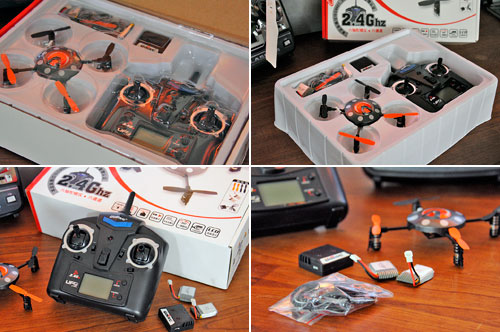 This $50 quadcopter is called the U816 UFO. It comes complete with everything needed to fly (quadcopter, controller, batteries). The communication between the 6-axis controller and the quadcopter operates over the popular 2.4 Ghz RC frequency. We were expecting the typical no-frills dual-stick unit, but instead got something a bit more sophisticated. The unit has an LCD screen, a stub antena, and trim buttons. 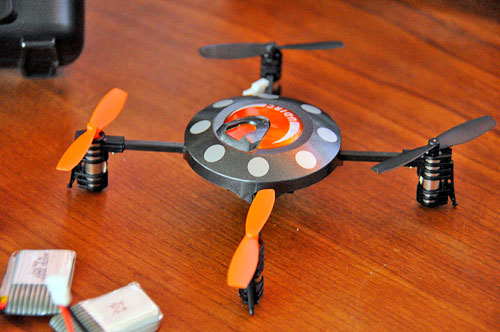 A closer look at the U816 UFO reveals how far these quadcopter have come. The electronics are housed at the center of the x-frame. The battery is stowed directly under the circuit board. Wires through the arms connect the four motors to the board. Unlike the DraganFlyer, these motors drive the propellers directly. This simplicity translates directly to lower cost. The kit comes with two Li-ion batteries and a charger that can charge both simultaneously. It is a nice little extra as it means one can just swap power packs when needed and be back flying in seconds!

Note that the charger cable has a USB plug at one end and will work with any 5V USB port (laptop, desktop computer, etc). We paired it with the AC plug that came with our iPhone and it seems to be working just fine. Once the batteries are charged up, we’ll check out this little RC quadcopter and report back on its flight characteristics. We are betting that it will be pretty easy to fly, even if it does not have the self-leveling capabilities of it bigger friend. 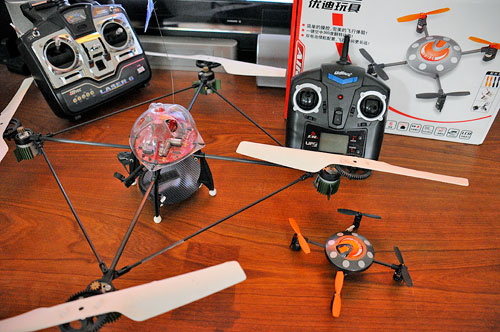 The $1,000 DraganFlyer is easily four times the size of the $50 U816. It is quite a bit more complicated, and requires more room to fly. Of course, it can also do a lot more…for now.

We say “for now” because we can envision the day when a “swarm” of micro quadcopters will “cooperate” to do the work of one larger quadcopter. Readers who are skeptical or think that these quadcopter are just toys should check out what a swarm of quadcopters are capable of when paired with the proper controlling software (flying in formation, precision construction). 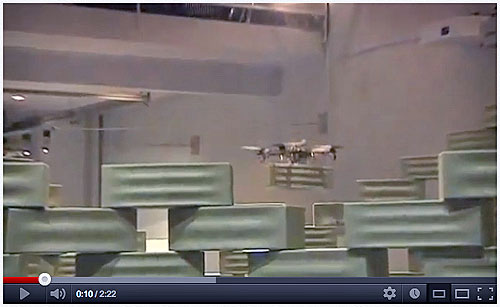 The drones are coming and they are arriving faster than one may think. In fact, they may have already arrived. It will just be a matter of time before they will be buzzing all around us!!!