A stainless steel cart is a helpful thing to have in the kitchen. It is a rolling platform which provides extra storage and additional counter space where/when needed. We have been looking for one for some time. Last week, we found one on listed on Craigslist by some folks who are moving out of town. A little haggling and we were the new owner of this IKEA FLYTTA stainless steel kitchen cart. 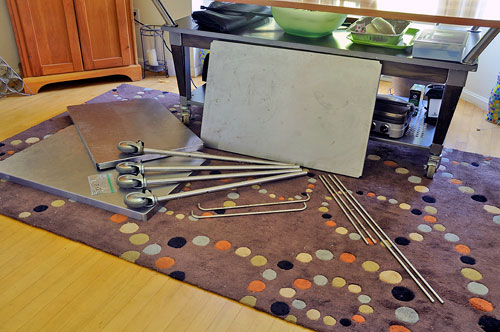 As with all IKEA products, this FLYTTA is (relatively) simple to take apart, move, and reassemble. We didn’t bring any power tools with us for the pick-up, so two of us spent about 30 minutes taking the cart apart. It was slow going because there were a lot of machine screws holding the cart together. It wasn’t difficult, just awkward doing it with a hex key. On the porch. In the rain. 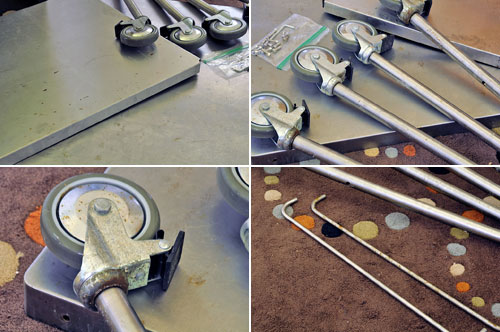 The cart was in pretty good condition. The wheels turned smoothly. There weren’t any deep scratches on the shelves, just light ones typical of any used stainless steel surface. The one thing we were a little surprised to see was some surface rust on the shelves, the towel handles, and the rails. These were more cosmetic than anything else. We were able to quickly remove them with a light sanding with 300-grit grade paper (before, after).

With less than 1″ between the screws and the shelves made made it difficult for a power driver to fit. We took a FirstLook at a tool called the Swift Driver last month. We realized this was the perfect opportunity to give it a FirstUse test. The Swift Driverhad no problem fitting into the allotted space and made reassembling the FLYTTA a snap. The ratcheting action meant that there was no need to completely rotate the handle as with a typical driver or with a hex key, a feature which is especially appreciated when working in tight places. When holding the collar to engage the dual-drive mechanism, the rate of rotation was increased by a factor of two. This tool from True Value’s Master Mechanics series made the assembly job quick and easy, something not always truefor IKEA projects. 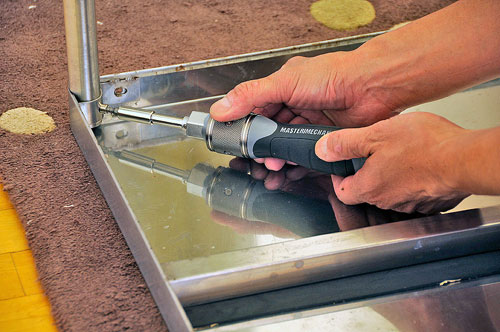 We found it best to have two people for assembling this cart. While it was possible for one person to attach the legs and install the rails, it was not easy to mount the second shelf alone. To mount that shelf, one needs a way to support the shelf at the right height while tightening the machine screws into the legs. One might be able to do it by balancing the shelf on a knee, but that would only work for the middle shelf; it wouldn’t work for the bottom one. Hmmm, a thought just occurred to us…one person MAY be able to do it if the cart is placed on its edge, not its top. We may have one of the interns try it just for fun.

When rolling the FLYTTA around, we detected a side-to-side wobble. Even after checking and retightening all the bolts, we were not able to get rid of the movement. We thought it just might be the limitation of the design. However, after closer inspection, the problem turned out to be that one of the wheels was not screwed into the post all the way. Fixing that eliminated the sloppy movement.

We like that the cart has handles at both ends and rail all the way around on the bottom shelf. We should note that the FLYTTA cart is NOT a heavy-duty utility cart. The cart will work fine in for kitchen use (holding a microwave, to support a cutting board, etc), but it is not something designed for rolling a lot of heavy things around like those used in an auto-body shop. But then again, you may not want an auto-body shop piece of equipment in your kitchen 🙂 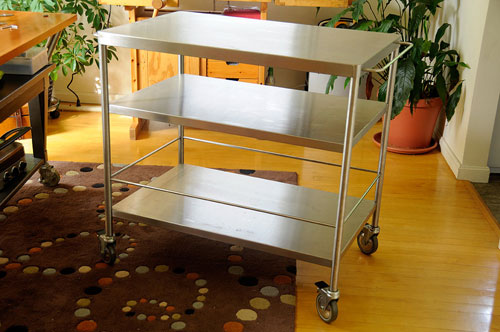 Now that we have the IKEA FLYTTA cart assembled, we realized that is actually a little too large for the RainyDayKitchen. However, since it has been cleaned and is ready for service, we are sure we’ll find a home for it …perhaps in our workshop or in someone else’s kitchen (Craigslist, baby). Everyone has a use for a sturdy stainless steel cart.