The  photo of the Digital Readout unit from our Craigslist purchase got the emails flowing. Many of you were eager to share your stories of  nixie tube projects. Apparently, nixie tubes are very popular for DIY project and are all the rage with the Steampunk crowd. We didn’t know 🙂 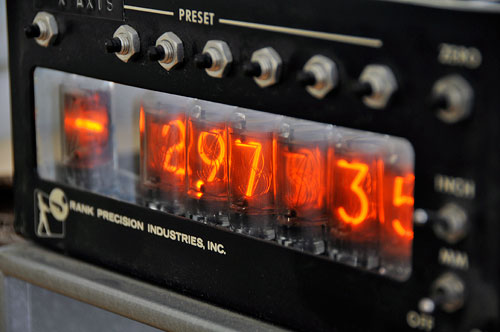 We did a bit more research on nixie tubes and learned that while they may look like vacuum tubes, they are actually closer to neon lamps. They are often used to display numbers, but can be made to display other symbols. Their popularity as numberic indicators was because all ten numerials (0-9) can fit inside a tube, one behind the other. A number is made to glow by applying about 170 volts DC at a few milliamperes between a cathode and the anode. The odd thing is the that numbers are not placed in sequence. They are arranged for minimum visual obstruction…which makes perfect sense. One such arrangement is 6 7 5 8 4 3 9 2 0 1 from front (6) to back (1).

We found it odd to see integrated circuits mixed with the nixie tubes. For some reason, we were expecting something more old-school. However, it appears that nixie tubes were used well into the 80’s and will actually last for quite a long time. A quick check on EBay showed that there are they are readily available and in many varieties. BTW, the name “Nixie” came from “Numeric Indicator eXperimental No. 1.” Eventually, they were replaced by LEDs for obvious reasons. 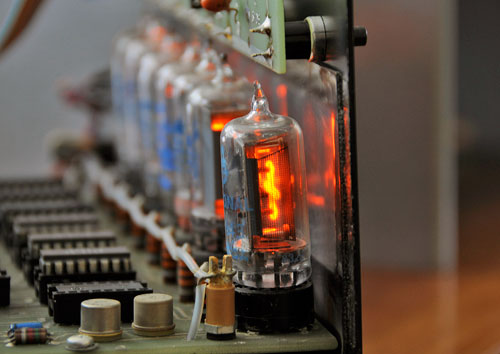 We had no idea that nixie tubes were so awesome! Once we get this DRO checked out and working properly with the microscope, we are going to look into some DIY projects using nixie tubes. If readers have any suggestions on a good first project, we would love to hear from you.